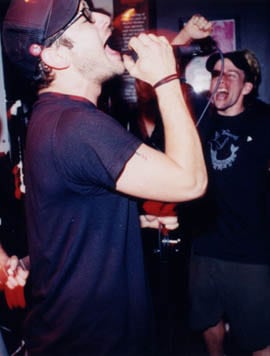 Billy Reese Peters is the best scenario for a buddy band. Aaron, Mike, Jack, Will, and PJ get together, practice, and play. Nothing fancy. They all live in Gaineville, Florida, where rents are cheap, beers are no more than two dollars a can at a bar, and good music seems to leak out of the locals, easy as sweat. Although there's a deep love of AC/DC by way of Elvis Costello by way of Radon, there's no "reinventing rock'n'roll" bullshit involved with BRP. They're just some talented dudes playing for the fun of it. And that's not a slight. Sometimes it's great to put on a beer-and-friends record and let it peel out on the player as you drink and sing along.
Because inside all of this, in the belly, there's this humility, an embarrassment of being told that they're good or even passable.
Music may be the savior and we're the disciples.
No one has to get all righteous about it for it to last and for it to continue being really incredible.
Here's to music being made, not manufactured.
Here's to Billy Reese Peters.

Todd: Why did you get banned from Eddie C's on more than one occasion?
Aaron: The first time was back when Stressface (another local Gainesville band) declared war against us. We were playing a set and Jon, Matt, and Dave from Stressface attacked us mid-song. Amps were knocked over, pitchers of beer were spilled, mic stands were bent. They thought we were actually fighting and didn't realize that we were friends. What made it worse was that when Mike was pulling the van around so we could load up our stuff, he ran over a tree that Eddie C had just planted, and he's apparently weird about his trees or something, so we got banned.
The second time, a similar thing happened, but honestly, I don't even remember what happened. After the set, Mike went up to kind of make peace with Eddie C and accidentally knocked the beer out of his hand, and then he said, "Well, I'd buy you another beer, but you own the place. It's your beer." That didn't make matters any better.
Todd: You've been to Croatia, correct?
Aaron: Yes.
Todd: Where is the most uncomfortable place that a spoon has ended up inside of you?
Aaron: I was with the Grabass Charlestons and we were on tour with Against Me! They've got this Jagermeister lust, it's fuckin' scary, and they didn't have any Jagermeister at this bar, so their road manager got the next best thing, which was this cheese-smelling imitation of Jagermeister. Tom (Against Me!) and PJ and Replay (Grabass Charlestons) were doing an interview with this kid with a video camera, and I came backstage and thought it was really silly or whatever, so the next thing I knew, I was saying, "Hey, look at this!" And I stuck the handle of a spoon up my ass. Then Uri (The Y) poured some beer on it, so I got beer up in there. The worst part of the night was that I woke up to pee, but when I came to, I was standing in this field, and I couldn't see anything because I didn't have my glasses on. Then I realized that I was lost and completely naked. I saw this wall that looked like it had graffiti on it, so I thought, "Well, maybe that's the squat." I made it back inside, and luckily no one saw me. I'd hate to think what would have happened to some stupid naked guy from Florida wandering around. Blind and naked in the middle of Croatia was one of the worst things that's ever happened to me.
Todd: What's your relationship to Skip Sunshine?
Aaron: Skip Sunshine is what Will and Uri started calling me on the Europe tour. I don't know. We were in Italy and I was running around on the beach, and Uri just decided to call me Skip Sunshine.
Todd: What does this phrase mean: "Predator handler?"
Aaron: About five years ago, me and Jimmy from the late, great Panthro UK United 13 went on tour as "roadies" for Fay Wray, a tour of the southeast. There wasn't a whole lot of roadie-ing going on. The first show was in Tampa at the old ADD (Attention Deficit Disorder) house. We got really drunk there and then came back to Gainesville, because that's where the next show was. Jeff London from Fay Wray was just out of his mind drunk. We parked in the driveway of Jeff's friend's house and went to sleep, and when I woke up, Jeff was outside completely naked - and this is suburban Gainesville, like nice neighborhoods - growling and hissing. The cops were called because there was a report of a "sexual predator" in the front yard. When the cops showed up, Jeff started talking shit to them, and we're trying to convince them, "No, no, he's a nice guy! He's a tenured professor!" So for the rest of the tour, they made me wear a hard hat that said "Predator Handler" on it. I was responsible for Jeff. 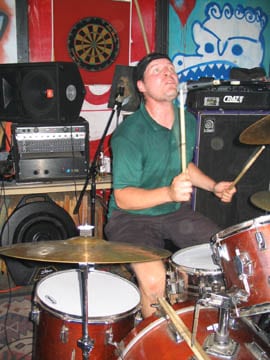 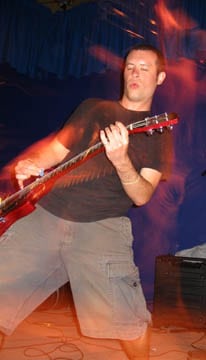 Todd: Getting to the band itself, what do you sing about? What are you interested in music for?
Aaron: I know this is a pretty generic answer, but we were all just buddies. I'd been watching Will (Grabass Charlestons) play in bands for a long time, and when our first drummer left, Will was around and wanted to play with us because we were already just hanging out... so it just seemed natural . All of us just always had fun together. Even when we practice, it's just sort of an extension of our friendship. We definitely feel that all too often people who make music take themselves far too seriously and seem to forget that the point of playing rock and roll is to have fun. We try to bring that every time we play a show and strive to encourage other folks to have as much fun as humanly possible.
Todd: What's the most requested song, the one that people sing along to the most?
Aaron: Probably "What's Up, Ding Dong?" It's loosely based on the time that me, Mike, and Will got beat up by the same guy simultaneously.
Todd: How'd that happen?
Aaron: We had played a show with this fucking amazing Gainesville band called Love You Dead, and the place we were playing offered us either money from the door or free booze. We opted for the free booze, got wasted, and we're standing in front of our house later on when these two guys walk by, shirts off, tucked into their back pockets, no-necks, huge, muscular guys. We were just standing there getting ready to go to a party and Will turns to one of the guys and goes, "What's up, ding dong?" They just snapped. We basically just got our asses destroyed by this one guy.
Todd: What's "Bustin' Fuckin' Loose"?
Aaron: It's the name of Mine and Mike's horseshoe team. We're the current reigning champions of Gainesville. I'd like to say that, had certain people shown up to the tournament and certain other people not drank so much, the outcome might have been different, but we were proud of our victory.
Todd: Does Mike Collins really want Dan Marino to become president?
Aaron: Let's ask him. [Asks Mike.] Oh, yes.
Todd: What qualities would he bring to the White House?
Mike: I'll just quote NFL Films here. There was a little special on Dan Marino in 2000 after he had finally given up the game, and they said, "Catching a pass from Dan Marino is like catching a pass from God." Who do you want for President? You can have John Kerry, Bob Dole, George Bush, or you can have a guy that's been compared to God.
Todd: Can you explain the paint job on your van?
Mike: I had a lot of free time. There was about four months where I was basically homeless, watching a lot of TV at Sean's house, staying there for free, and I was like, "Hey man, do you want to paint my van Dolphins colors?" He's pretty lazy and didn't have a job either, so we went to the store and bought a bunch of paint, started painting the van. We were just so lazy that we gave up halfway through.
Todd: It remains half-painted?
Mike: Oh yeah. One of these days, I'll finish it and drive it to the Super Bowl.
Todd: Aaron, take us up to the point where you're in a bathtub full of beer wearing nothing but a captain's hat.
Aaron: It was my 27th birthday and I was in Las Vegas, Nevada, my favorite place on the face of the earth. We were wandering around the hotel looking for cocaine and we went into this one room because they were playing the Zero Boys. We started partying with these people, and when I went to take a piss, I saw this bathtub full of beer. I didn't think too much about it, I just knew that it looked awesomely enticing, so I got naked and sat in the bathtub. I was just kinda chilling out and then I looked up and saw a friend of mine with a camera. I knew that would come back to haunt me.