All pictures are screen grabs from Bush’s Brain.

This DVD is a documentary about Karl Rover, George W. Bush’s campaign advisor, based on the book Bush’s Brain: How Karl Rove Made George W. Bush Presidential.

The cumulative effect I got from watching this DVD was a sentiment that goes along the lines of “If they do that to their own, what do you think they’re gonna do to you?” Bush’s Brain is an interesting and distinct documentary by the fact that a lion’s share of the first-hand commentary highly critical of Karl Rove and his tactics of grabbing power is made by fellow Republicans, some of whom worked side by side with him. Although it must be noted that some of the Republicans interviewed were those who had gone head to head with Rove and lost, Bush’s Brain isn’t just a editing together of clips of sour grapes. So, yes, it is partisan politics, but this time it’s the very publicly rare bout of Republican vs. Republican. Here’s what emerges.

There’s no doubt that Rove is a smart, smart man. There is no doubt that Rove is highly motivated, skilled, and a lean political monster who was able to position himself in a sweet spot on the Republican roster at an early age. There is no doubt that Rove has had a long view on getting George W. Bush elected. There are many folks similar to him in almost every political arena. What sets Rove apart is this: he can play ultra-dirty pool while keeping his hands clean, almost to the point where his hands seem to always to be in plain view. He’s always got something going on underneath. He’s got the human chessboard sense of Prince Machiavelli and the reflexes and timing of a street hustler, all stuffed into a frumpy middle-aged white guy shell. Don’t let his life-in-a-cubicle, fed-by-fluorescent-lights looks fool you. He’s one of the most tactically savage politicos America has ever seen. He isn’t afraid to beat the hell out of his opponents. This documentary makes the very convincing argument that Rove’s power is immense, to the degree that he has become, in effect, the co-President of the United States. 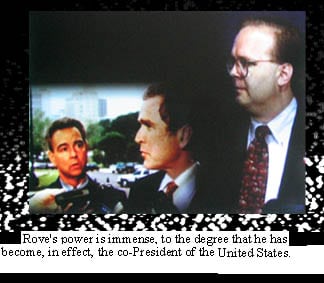 The documentary looks at Rove’s ascent, from his beginnings with the Republican party, making enemies almost immediately, and then quickly moving through the ranks of city, county, state, then nation-wide influence. He’s the guy that orchestrates campaigns, tells his candidate what to say, where to say it, how to say it. He sets the tone and oversees all the details. Like a general, he maps out the strategy of the political battlefield. One response could be: “But he’s just an adviser. The candidate has the power to say and do what they want. Candidates can disagree with their advisers.” True. The strength of this movie is that it sets up and illustrates the pattern and fingerprints of a Rove-orchestrated campaign. Yes, it could be a series of highly improbably coincidences, but, even purely statistically, that’s a remote chance.

Here’s the frustrating thing: Rove hasn’t been caught red handed. With a sleight of hand and a little bending of power from friends in several agencies, nothing he has done has ever been deemed illegal, yet he has the uncanny ability to destroy his candidate’s opponents through less-than-honest, definitely unethical means. He understands the power of innuendo and of inference. He’s got a tabloid editor’s mind while sounding like a staid college professor. 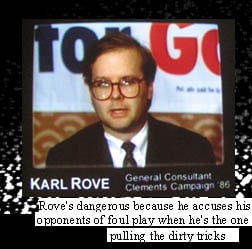 I’ll provide two examples. You’ll have to watch the documentary to get the rest. In a 1986 campaign for Texas governor, Rove represented Republican Bill Clement. Nearing election time, when the race was almost at a dead heat and a gubernatorial debate was about to occur, Rove found a bugging device in his office. The timing of the diversion was immaculate. Reporters, instead of covering the debate en masse, focused on the bug. As evidence was being collected, more and more of it pointed to Rove planting the bug himself. He still denies it to this day. According to an FBI report, the battery in the bug would have had to be replaced daily, so a person would have to have open access to Rove’s personal office to replace it. Upon further investigation, the battery in the bug had only about fifteen minutes of battery life expended when it was removed from the wall by the FBI. Rove inferred that Mark White, Clement’s opponent, had the most to gain from a bug in Rove’s office. Not true. Rove had the most to gain. White looked like he was playing dirty – by being accused of planting a bug – and lost the election. It’s classic diversionary tactics. Rove’s dangerous because he accuses his opponents of foul play when he’s the one pulling the dirty tricks while keeping his own hands clean. That’s as smart as it is devious.

Going beyond hardball politics and becoming outright reprehensible was Rove’s orchestration of George W. Bush’s Republican bid for presidency against fellow Republican John McCain. In 2000, McCain had soundly won the New Hampshire primaries and it looked like he’d have the South Carolina primary sewn up, which would have all but earned him the Republican nomination for president. What was orchestrated was blunt and sly. Bush’s campaign pulled out plenty of nasty tricks. It was said that McCain had fathered a child from a black prostitute. The damage of the accusation stuck, even though McCain and his wife had adopted the Indian child from an orphanage in Bangladesh overseen by Mother Theresa. There were accusations that, due to McCain’s being in a Vietnamese prison camp, he was a bit screwy in the head. Relentless attacks came from all directions. Here’s an interesting tidbit: George Bush, like the ads that would come out with the swift boats against John Kerry, denied all responsibility for the ads, that they were put in his name by independent groups. Rove and Bush absolve themselves from culpability, but it’s hard to imagine that with Rove’s far-reaching planning that such vicious and well-timed attacks had just come out of the blue. It’s far too much constantly repeated coincidence.

The maddening part is that there is so little solid evidence against Rove, aside from the carnage in his wake. For me, Bush’s Brain does a nice job of packing Rove’s history into a way that the viewer can see the marks of a typical Rove campaign and be on the lookout for what he does next.

It all leads up to this difficult question: “What’s next?” So far, Rove has stopped at nothing to keep his man in power. Stay alert. If the Rove pattern holds true, there’ll be attempts at political hijacking on or around election day, November 2nd, 2004.

Lucha Masks and G-Strings for Twenty Years: The Dwarves Live at the Troubadour, October 8th, 2004 By Nam