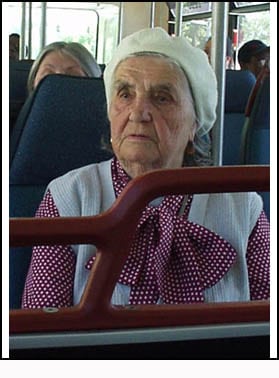 I've been riding public transportation on a regular basis since I was about twelve years old, when the "alternative" middle school I attended couldn't afford school busses and I started taking the bus home in seventh grade. This began a long and sometimes tumultuous relationship between public transportation and I that lasts to this day. Sure, sometimes he's late or never shows at all, but as fiercely as I may curse when I'm left in the lurch, I know I'll always come back.

I can't afford a car, and even if I could, I hate to drive. Plus, taking the bus gives me an opportunity to feel like I'm doing something good for the world in general. I'm no damn hippie, but it's nice knowing that I'm not contributing to rising gas prices, air pollution, or traffic.

In addition to the warm, fuzzy feeling I get from helping my brothers and sisters on Starship Earth, the bus is also a great place to people watch. I've met or observed some of the most amazing and sometimes unreal people you could ever hope to see while riding the bus or waiting at a stop. Sometimes I’ll make up stories about or invent histories for them, but most of them are fascinating enough without the benefit of my imagination.

I'll never forget the time during my second year of college, when I decided to bring my pet rat to class with me. Waiting at the bus stop, I let Halo out of the lunch box I was carrying her in. A sleepy-eyed Asian woman approached me, smelling strongly of cheap beer (keep in mind that this was around 11 AM). She asked if she could pet my rat, and I said sure, warning that she might nip your fingers if you smell tasty enough. As she pet Halo tentatively, I noticed a large tattoo of an exotic bird on one of her arms. She asked me a few odd questions, like the year I was born. Suddenly she stopped petting Halo, looked me in the face, and asked earnestly, "Do people think you're weird?"

I lived in Michigan for a while, and there I met one of my favorite "bus folk." I called him Mr. Kennedy, and I saw him regularly on my way to and from work. I'd guess he was in his late seventies, with his white hair buzzed close to his scalp, mostly mismatched clothes, and a sometimes dazed, sometimes vacant expression behind his thick, Coke bottle lens glasses. He had a tick that caused his left foot to sometimes thump uncontrollably against the floor of the bus. The first time I noticed him, he was loudly announcing to the general world in his monotone voice, "I'm glad I don't drink no more beer and wine," and without pausing for breath he continued, "Beer and wine, I'm glad I don't drink no more." The next time I saw him he earned his nickname by announcing to no one in particular that, "The summer before he was shot, President Kennedy went to Ireland." Once, he mounted the steps of the bus with a portable electric razor in hand, and proceeded to absent-mindedly shave his already shaven face as he rode. The only time I ever talked to Mr. Kennedy, he was wearing an "I LOVE BINGO!" lanyard around his neck. He turned to me and asked my age. When I responded that I was twenty-two, he nodded sagely and added, "You remind me of my niece." Perhaps the last time I saw him, he was riding the bus in uncustomary silence when he suddenly announced, "LOOK OUT LOOK OUT LOOK OUT." The bus screeched to a halt, but as far as I know, there was nothing there.

Sometimes people intrigue me merely by their appearance. Riding a bus in Redmond, Washington, I once saw a man in his late thirties, with tortoise-shell framed glasses, short brown hair, and a somewhat unfortunate attempt at a beard. He also wore a teal, crushed velvet shirt with shiny green buttons and a jacket of patchwork brown leather with navy blue slacks and work boots with no socks. He had a Microsoft ID on a lanyard around his neck, a hardcover British edition of Harry Potter and the Half Blood Prince, and small plastic headphones in his ears. I decided I'd give my right eye to know what in the world he might be listening to.

I’ve seen a man with an angry set to his grizzled face wearing a “World’s Best Grandpa” hat. I’ve seen a woman in her late sixties wearing short-shorts to show off tattoos of tigers chasing each other around her thighs. I’ve watched a soft-faced young man ask himself in a gruff voice, “What’s your point?” and respond in a high, effeminate warble, “The point is—” only to be interrupted by the gruff voice again and again, “What’s your point?” I’ve had a middle-aged man in a tutu and tiara rollerblade past me at a bus stop. I’ve listened to frat boys brag loudly into their cell phones about girls they “did” last night, and I’ve heard a toddler plead to his mother, “But Mommy, I don’t WANT to grow up!”

Someday I will probably get a car, and spend more time cussing at those driving around me than marveling at nutters riding next to me, more time worrying about the cost of gas than whether I’ve got change for my fare. Even then, I can’t imagine not coming back from time to time—when time permits or money insists—to ride alongside the mad and wonderful, the mundane and pedestrian. It’s a nice little reminder of how diverse this world is.

Or if that’s too sappy for you, a nice chance to stock up on anecdotes and view a modern-day freak show. It’s your call.