Fullerton, California’s Burger Records has created quite the name for itself. The label humbly began in 2010 as a means of self-releasing records by Thee Makeout Party, co-founders Sean and Lee’s then band. Burger soon gained widespread notoriety and recognition for licensing cassette format releases by bands on labels such as Recess, Hozac, Dirtnap, Douchemaster, and several others. Since then it has released some three hundred cassettes and records, along with hosting several concerts at their retail space record store.

Burger has also successfully assembled touring festivals such as Burgerama. This year they seem to have outdone themselves and others by organizing the Burger A-Go-Go, a one day festival held at the Observatory in Santa Ana, CA. It featured a lineup consisting of all-lady or lady-fronted bands from various parts of the country. Among them were surefire draws such as Dum Dum Girls, Bleached, Best Coast, the Coathangers, Shannon And The Clams, the Muffs, and Peach Kelli Pop.

Save for Bleached and Best Coast, these would also end up being the only bands I caught at the fest due to the exhaustion caused by an event scheduled for nearly twelve hours in a venue with hardly any air conditioning and over-priced refreshments. I didn’t find out until three bands in that the yellow “press” wrist bands granted access to re-entry which was strictly forbidden under normal circumstances. I briefly shed a tear for the rest of the concert attendees, but quickly retracted the sentiment upon realizing that I was in the minority of the age group of people over thirty. In other words; the kids would be fine.

This was to be a day-long affair with the Observatory opening its doors at two PM and posting its set times on TV monitors in the walkways of the venue. My girlfriend Claudia and I, along with our good pal George, arrived shortly after five PM. We were just in time to find out that the Sugar Stems from Wisconsin opted out of the fest and headed towards Arizona after playing Los Angeles a couple nights before. Rats! I’d have to until another time to catch them. 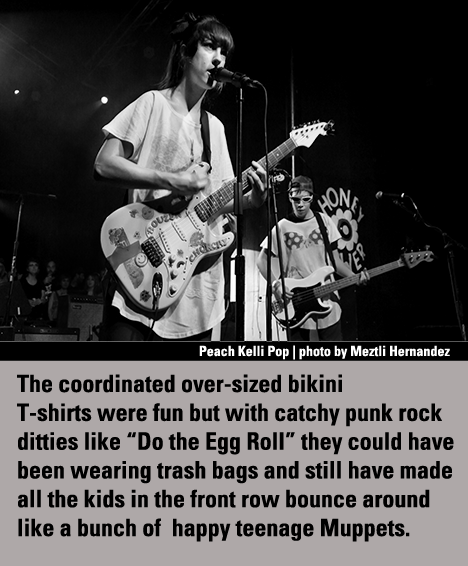 Peach Kelli Pop—featuring Allie from the excellent White Wires and originally from Ottawa but now residing in California—was the first act I caught. Having already familiarized myself with her at a show a couple years ago at Burger Records store—as well as through her self-titled full length—I soon came to realize that this was a completely different incarnation of her back-up band. It consisted of some fresh faces as well—Baby J from Can O’ Beans and Stoned At Heart. The coordinated over-sized bikini T-shirts were fun but with catchy punk rock ditties like “Do the Egg Roll” they could have been wearing trash bags and still have made all the kids in the front row bounce around like a bunch of happy teenage Muppets. It was a great start to the evening. 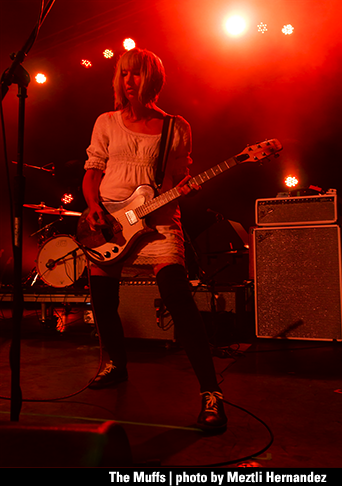 The Muffs need no introduction. Never mind that a band of their caliber seemed underappreciated by not being given a later time slot; they took the stage like the pros they are and owned every inch of it. Kim Shattuck and company were arguably the loudest band of the night and quickly set the tone for the remaining performers.

Atlanta’s the Coathangers have also made some personnel changes since they graced the pages of Razorcake. The lineup has trimmed down to a modest three piece utilizing the barest instrument essentials while forgoing their previous use of keyboards. To be honest, I was previously only privy to and expecting their keyboard-infused numbers and was a little disappointed to not hear songs like “143.” However, as previously stated, this is a completely different Coathangers and they’ve developed a fiercer, more vivacious stage persona which not only deeply impressed me, but made me forget all about the absence of the keys. The Coathangers appeared to have stolen the show early on.

Shannon And The Clams soon took stage and the stakes were suddenly raised. Their infectious brand of doo-wop punk rock got the crowd worked into a frenzy and was accented with their colorful outfits and playful use of bed sheet-clad ghosts as back up dancers. The energy was so electric that soon stage divers were cannon-balling into the crowd: a no-no in most club settings. A venue such as The Observatory most definitely employs security guards and bouncers, and although their presence was known, they also didn’t seem to mind much at the fun being had at their duties’ expense. No one appeared to have been hurt and damn it if some of the big lugs didn’t have semi-approving smirks on their faces. 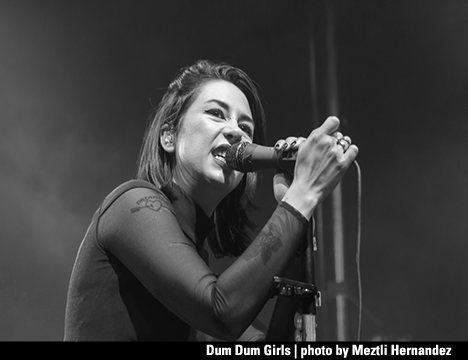 Dum Dum Girls figuratively brought the house down by considerably slowing down the tempo with their shoegazey dream pop. The ladies and gent performed their latest album Too True in its entirety but still tagged classics from their previous releases at the end. DDG’s performances are typically aesthetically intimate with custom light displays behind the band as well as a highly fashionable coordinated wardrobe consisting of mainly black outfits. They were the most sophisticated band of the evening but managed to win over the hearts of the sleeveless, sweaty kids who took a break from bouncing off the walls. 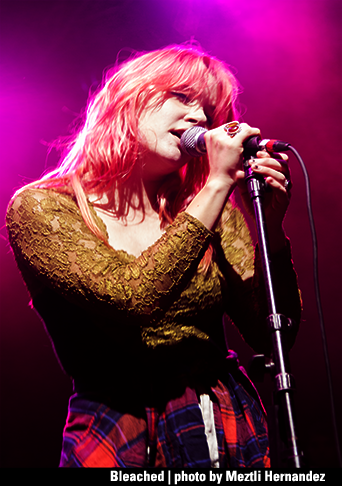 At this point, the old man (myself) felt his age and took a break from the festivities to enjoy the perks of the press pass. I decided to seek salvation in the form of the fast food/taco persuasion, and as a result I missed both Bleached and Best Coast’s sets. Apologies to them, although I did hear from Claudia—who was photographing them—that their sets were stellar. My taco, burrito, and french fries bounty too was stellar in its own greasy way.

Juan Espinosa has been a Razorcake contributor for six years, lives in Inglewood, CA, and thinks that hard shell tacos are ridiculous. (Juan’s Instagram)