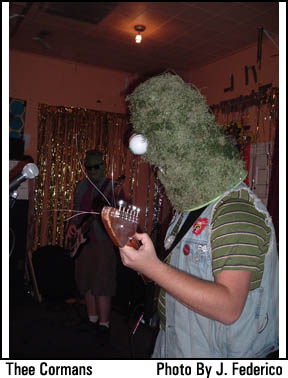 By the time it rolled around, I’d been looking forward to Budget Rock at the Stork Club in Oakland for awhile. Not only were lots of good bands playing, but it was a little something to make me feel better about missing The Fest in Gainesville, FL. I suggest that everyone unfamiliar with Budget Rock keep their eyes peeled for it next year!

The Stork Club (http://www.storkcluboakland.com/) is an odd little club. Let me tell you, you will not want for things to look at while you are there—it is a veritable cornucopia of visual stimulation. All kinds of Barbie Dolls (especially the fancy, limited edition ones, like “Elvis and Barbie”) in their boxes line the back of the bar. A white Christmas tree with sparkly red garlands and plastic candy canes competed for attention with Halloween decorations. A neon-pink bird in the corner waved its electrical wings. Photos of bands and grandparents and little girls with parasols line the walls, along with stickers and flyers. Strips of blue, red, and gold shiny paper fluttered behind the stage. A miniature EiffelTower and Statue of Liberty were on display mere feet away from a giant dollhouse. In the back there are a couple of pool tables, some video games and pinball, and a smoking area. This was where Budget Rock 2007 took place.

Budget Rock is a few days worth of shows that, as they put it themselves, “generally celebrate mindless garage rock (particularly the Bay Area's superior firing power in said genre compared to the rest of the world).” Basically, a recipe for fun!

The first band up were Thee Cormans (http://www.myspace.com/theecormans) from Southern (I think) California. I really liked them. First of all, they were wearing weird masks. Later research indicates that this is a common thing for them and not just a Halloween one-off. To be clear, I prefer really rocking out over theatrics, but I certainly don’t mind a band dressing up kinda funny once in awhile. 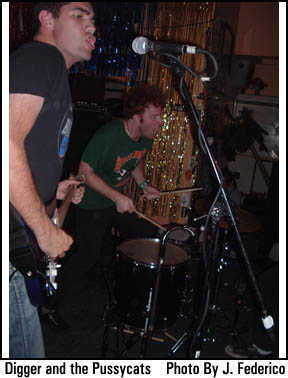 They’re a three piece, with Frankenstein on bass, some gorilla playing drums, and a weird….hmmm—I don’t know what exactly (kind of like a wooly sleestack or like Oscar the Grouch but with a really tall head and blue instead of green) on guitar. They’re a surfy / garagey band (sounds like surf with a bad hangover) with a penchant for instrumentals. They played a great song that I thought was called “Werewolves In Heels” but that I am now slightly unsure about—I believe they said it was a cover of a song in some weird bike/werewolf film, which could only be Werewolves On Wheels, so I either heard them wrong or they took a bit of liberty with the title (acceptable under the circumstances, I believe). Regardless, it was great!

They were also quite the comedians, and the gorilla shared with us what I considered to be a true gem: “The next three days of Budget Rock are cancelled ‘cause you’re all going to be in the hospital from getting your balls rocked off by us.” Legend.

Unfortunately, shortly thereafter there was also some joking about “rapin” (raping). I’d be happy if I misunderstood that, but I don’t think I did. Perhaps this is where the “mindless” part of the evening came in. My request to Thee Cormans: ditch the rape reference. You’re a good band and you’re funny, but when you make rape jokes (even super mild ones that you quite probably don’t mean and may only be an extension of your monster persona) it totally bums me out.

Next up were Les Hormones (http://www.myspace.com/leshormones). This is the band I most wanted to see at the show. Regrettably, before they started, I’d gone to the bar to get a drink, and began talking to this guy about brains (he was supposedly studying to be a neuroscientist). It was a very interesting discussion. I guess it would have had to be, as it carried on right through Les Hormones’ entire set. What kind of loser am I? I have to say that, behind the conversation, they sounded great. I am not too sad about it because they’re from San Francisco and I’m going to go see them in a few weeks, but still, that was dumb. 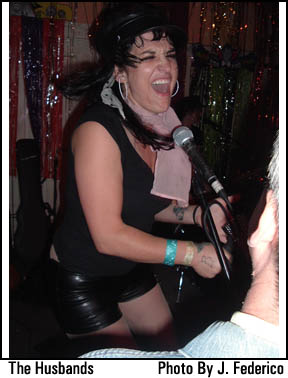 Following Les Hormones were The Husbands(http://www.myspace.com/thehusbands). They didn’t blow me away but they were good. They’re also from San Francisco. For some reason it was the first time I’d seen them! I liked the singer’s voice and thought it leant itself very well to the style of music they play, a sparse garage style. Sometimes her sound (and the backing vocals) were very reminiscent (in a good way) of old ‘50s female singers. I liked when she added her own screaminess and growliness to the sweetness of the aforementioned girl group sound. They wore matching outfits and there was a lot of guitar feedback. It seemed like there were many songs about love - or lack thereof - and boyfriends. I wish the guitar would have been more prominent. A fun band.

Digger and the Pussycats (http://www.myspace.com/diggerthepussycats) were next. They’re a two piece band (drums and guitar) from Australia. They make a lot of noise for just two people! The drummer didn’t use a chair, but rather stood the entire time—perhaps for maximum engagement. He did a lot of energetic jumping and hitting (of his two drums and cymbal). It was great! I didn’t hear anything super original (I’m not sure how original you’re going to get when playing garage music, anyway) but they were still good. “I Wanna Be Your Slut” was one of the more outstanding songs of their set. I couldn’t tell whether they actually both have loads of sex or they really need to get laid. It was cool to see a band all the way from Australia playing at Budget Rock.

Hank IV (http://www.myspace.com/thehankfour) played last and I am sorry to report that I had to miss them. Curses! Such is life when you live in the city and have to take the train back from the EastBay because your EastBay friends didn’t answer the phone to afford you a place to crash. However, Les Hormones, The Husbands, and Hank IV are all from San Francisco, so I will most likely get another opportunity to see them pretty soon. This is great, because I really like them! I’d say Hank IV (a most humorous name, by the way) is more “rock” than the other bands that played, with interesting forays into punk and even, at times, psychedelia. Personally, the more weird they get, the more I like them. Although I have no doubt they rocked it, I would be curious to hear how the show went, as the singer, Bob, had a big brace on his leg from wrecking himself at the show they’d played prior. He is an enthusiastic dancer and had apparently jumped off the stage, to the extreme detriment of his knee. Let’s hope he heals up as quickly as possible!

The following days of Budget Rock were crammed with lots of great bands (check the line up here: http://www.myspace.com/budgetrock)
and it was disappointing that I couldn’t go to more shows because of other commitments (especially sad to have missed the Trashwomen!), but I’m glad I could make opening night. Viva Budget Rock!