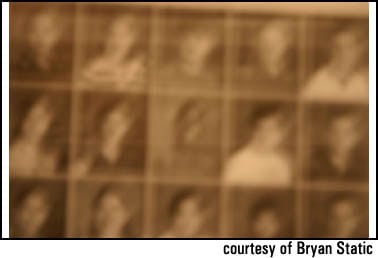 Bryan Static's Third Column: Top 5 Stupidest Things That Have Landed Him in the Hot Seat

Ah, summer, the time of year when a young man’s fancy blooms into an everlasting stalking relationship. It also means, for us younger folk, that school is out and my school system has a problem.

I’m sure it’s all schools, but I’ve only gone to three in my life, which were all in the same district. I’ve had to deal with stupid problems like my gym teachers playing shitty pop music in the workout room, a science teacher who couldn’t turn on a computer and refused to believe that ninth graders knew how, and a music teacher who would teach everything but music.

Maybe it’s because I live in Texas, or maybe it’s the water, but my teachers have given my classes the dumbest assignments, made us watch the most moronic videos, and have gotten people in trouble for the most inane things.

So may I present:

What is with me and lists? I swear to god, the next thing I write will not have a numbered list. Also, I know what you’re all thinking. “Damn Bryan, have you already run out of things to say?” No. No I have not. I give proof of that in my next column: “Fifty-two Different Euphemisms for Farting.” Let’s get started, shall we?

5) Writing Songs
Math class, 8th grade.
In my beginning days of the punk scene, I was like a good lot of pre-teen punks, listening to nothing but Rancid, NOFX, and Bad Religion. I still have a weakness for such bands (mock me all you like), but back then I had such a liking for them I would spend hours upon hours trying to rip off their sounds.

I used to hold my imitation songs in high regard, not only as a paradigm of punk rawk [sic], but as an epitome. (According to my sources, paradigm is just a set example, but an epitome is an example that uses all the best features. HOORAY FOR BIG WORDS THAT BASICALLY MEAN THE SAME THING!) I honestly thought these songs were good! But the only good bits were the titles (Including such hits as “Eerie Groin Legume,” “Superpowerchord,” and “Not My President” which I cleverly stole from a Punk Voter T-shirt).

Around the middle of eighth grade, my algebra teacher realized my grades had been slipping and she began to secretly observe me. She soon discovered that instead of paying attention in math class, I had been writing songs! In my defense, how the hell was a thirteen year old supposed to be interested in math for two hours at a time? COME ON!

So I was given extra homework until my grades improved. They never did. I still passed and continued in the accelerated math program the next year, only to drop out before I moved on to Algebra II.

4) Rocking Out
Jazz Band, 8th Grade.
One month, we were preparing to enter a tournament of other middle school and high school jazz bands and such. Being the awesome Static-Man® I am, I had a solo for some stupid salsa number. I never remembered how I wanted the solo to go, so I just kept making it up every time I had to play it. It worked well enough.

About a week before the competition, the band was rehearsing the stupid salsa number and I decided to put distortion on the amp. It was supposed to show the beauty of music by the juxtaposition of the static-like guitar tones over the salsa-influenced jazz coming from behind the guitar amp.

However, my teacher saw it as “noise.”

After the rehearsal, the band teacher came up to me, not only threatened me to be banned from the competition, but from jazz band in general, all band competitions, concerts, and I would still be forced to play trumpet in band class everyday (which was a requirement to be in jazz band), if I ever, EVER did a “stunt” like that again.

Maybe the duck walk at the end of the solo was a bit much.

3) Bleeding
Reading hour, 4th Grade
To clarify on this one, my fourth grade teacher was actually a nice person who seemed to generally care for her students. This incident was under the authority of a substitute teacher.

I had finished the selection of reading planned for us that day with a good thirty minutes left before lunch. So I decided to take a nap. I tilted my head back and closed my eyes.

I woke up to the shrieks of a girl who decided it was a good decision to draw under my sleeping head. “Mrs. X! Mrs. X! Bryan’s dripping red stuff on my drawing!”

“Whuh?” I said as I drowsily began to sit up. I looked at the floor where she had been drawing and the area over which my head rested. There were a few drips of blood red liquid on her artwork. Before I could figure out what the red stuff was, I was pulled out of my desk by the substitute and given a stern talking to. At the end of her long rant, she said, “And get that red stuff off your face, you look ridiculous!”

Still confused, I went to the bathroom to wipe off my face. There were two medium sized streams of blood running from my nose to my cheek because of my neck hanging backwards. I never figured out what caused my sudden nosebleed and I never had one since.

There should be a test for substitute teachers. It should consist of a drop of blood. Under which, it should read “WHAT IS THIS?” If they do not get this question right, please point them to the exit.

2) The Suicide Machines
English, 8th grade.
“Shit! Shit! Shit! I have a project due tomorrow! What the fuck is this? I have to make a grammar notebook with a theme for the images? Fuck it, I’ll just do bands…”

I turned in the project the next day. It was a good wasted thirty minutes of work. I had completely forgotten about the project by the end of the period, hoping it was the last I’d ever hear about it.
Two days later, my English teacher stood in front of the class and said exactly this: “Class, I’m not into the newer music you kids listen to,” which was a weird thing to say for a woman who was, at oldest, twenty-eight, “But if you choose to use music as a theme, make sure the band names are SCHOOL APPROPRIATE!”

“Aw fuck, what did I now?” In my eighth grade class, I was the only one really into music.

She approached me after class and told me about how she and another teacher graded the projects and found my use of the now-defunct ska/punk band The Suicide Machines’ logo inappropriate. “There’s nothing funny or cool about suicide, Bryan. And because of your sick sense of humor, I’m giving you a fifty on your project. I hope you enjoyed the laugh.”

Another day, another slew of easy assignments that I can get done in five minutes. My biology teacher is so fucking lazy; he’d never teach us new material. I can’t think of one thing that I’ve learned all year.

After I was done with that day’s particular assignment, I reached into my backpack for the issue of Razorcake I was reading. It was the normal, daily routine, until the teacher walked up to me because I wasn’t working.
“What’re you doin’, boy?”
“Reading.”
“Why ain’t ‘cha workin’?”
“I’m done.”
“Prove it.”
I showed him my paper. The only reason no on else was done was because they were all talking to their friends. Being the friendless loser I am, I got my work done super fast. “Fine. What’re you reading anyway? Every day you walk into class with that magazine…” He proceeded to turn to the cover.

“What the…” And here’s the part where we find out god hates me. To find out exactly what the hell I’m reading, he opens up to a random page and the page he chooses is the one that happens to have Paddy standing in his underwear and playing bass next to a quote about hating the government. “I’m writing you up for this. This is pornographic material.” He did the stupid thing and gave me back the magazine.

The write-up was written, but never executed. Probably because the administrators didn’t believe a magazine existed called “$3.”

You can contact me at my brand new, easy-to-remember e-mail address: [email protected]