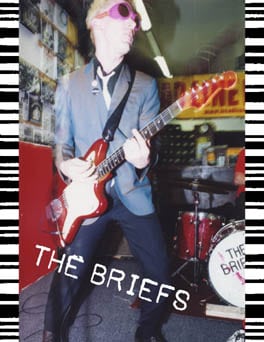 Briefs, The, The Turbo AC's, and a Couple Other Bands We Didn't Stick Around For: Live at the Underworld in London, July 25th 2004 By Benke

This was it. The last London hurrah before moving back stateside. I'll be tearing up like a five-year-old girl saying bye-bye to her dollies on the first day of kindergarten when the missus and I board the plane at Gatwick Airport. Sure, at times the city treated us with all the due respect a baby treats a diaper, but despite near destitution and a self-imposed exile in Brixton, we managed to eek out a pretty sweet existence on cheap wine, cheaper pints, good, cheap friends and a steady stream of top notch punk rock'n'roll shows (usually for under a fiver... CHEAP!). So, try as I might, I simply cannot in good conscience make a declaration of detestation against the good city of London. It wormed its way into the soft spot of my heart. My reputation as a perpetually pissed-off punk has been battered, deep fried, and served to me like crow with a side of chips. As for the final show, Fortuna, that miserable slut, shone down her snickering countenance, bringing the Briefs to the Blighted Isle for a set in Camden Town. And why not? They do a better impression of an English band than any of the London punks I saw play during the last twelve months (save for two truly righteous bunches of rockers, the Parkinsons and the Ulcers). Up yours, White Girl, Metro Riots, and the absolutely terrible Dragster!

It takes more than sentiment and wistful nostalgia to make a memorable show, and, warm, cuddly feelings towards London aside, I couldn't help but anticipate some nonsensical shenanigans to build my ire and restore some of the hate our imminent departure has mitigated. Sure enough, our good friend Inigo rang us up a few days before the show with an invitation. The potential for disaster had reared its ugly head.

"Listen, Josh, I'm thinking about taking my parents' barge through the back canals of London on Sunday," he began. "Would you and the missus be interested in joining me?"

My reply was instant, enthusiastic, two-pronged and slightly confused. "You bet your sweet ass we'd like to join you," and then, "London has 'back canals?'" Back canals, indeed. It's a pastime of the pretentious and posh to spend Sunday afternoons, weather permitting, floating down secret urban waterways on long, thin barges. The canals are so secret, in fact, that any punter with fifty quids burning a hole in his pocket can rent one of the unruly boats and wile away the day at a mile and a half per hour, scaring the bejeezus out of more experienced, sophisticated barge captains who will drop the monocles from their eyes and clutch at their chests at the sight of a drunk man's bare ass. Errr, or so I'm told.

We arrived at Inigo's parents' swanky Primrose Hill address armed to the elbows with upper class provisions - red and white wine, biscuits (crackers to heathens like you and me), and a selection of finely aged cheeses. Partners in crime Rachel, Alex, and Issy showed up and we all waited patiently for Inigo, who arrived fashionably late and immaculately disheveled with a pretty French girl in tow. We embarked on our journey and plowed through the wine in roughly five minutes. In a master stroke of providence, we discovered four more bottles of red stowed in the belly of the barge. As we toasted good fortune, the missus said, "Somebody must've dosed the wine, 'cause I swear to god I just saw a fuckin' giraffe walk by." She wasn't kidding. I looked up, rubbed my eyes in disbelief and stared at the beast as it chomps on tree leaves thirty feet up. What a city! The canal slices through the center of the London Zoo, so it turned out that we were not hallucinating. It was almost too much to handle. I was awash in good vibes. It's serendipity, baby! I was wrong, so wrong, to think this excursion would foster hate. Nothin' could bring me down now.

We puttered back to the dock and disembarked around the time the show was starting. The others begged off, and Issy, the missus and I floated through the streets on the wings of inebriation, settling in a pizza parlor just up the street from the Underworld. We ate, drank, and made our way to the show. My stomach started to rumble, which I blamed on the pizza. I should have know better, though. It was actually my sixth sense gearing me up for the bullshit we were about to experience at the hands of the mooks watching the door of the venue. The city was trying my patience one last time.

We approached the door, asked for three tickets and the bouncer smiled big, telling us that the show is sold out, but that he can sell us three tickets for twenty quid a piece. We replied with a couple of disbelieving "Yeah, right"'s and he responded with an indignant, "Well, your precious American bands have already finished their sets." I could clearly hear the Turbo AC's from the street, so I told him I'd rather speak about tickets with the woman working in the box office. The bouncer called us "yanks," "wankers" and a few other derogatory words containing "a-n-k," and we laughed as we paid seven quids apiece for our tickets and strolled through the club entrance.

We descended the stairs and heard the Turbo AC's say, "Thanks, stick around for the Briefs." Beers and a prime spot front and center secured, I noted the international flavor of the audience. Guy to my right? "Hi, I'm from L.A." Guy to my left? "Hey, I'm from San Diego." Guy in front of me? "Hey, I'm from South Dakota." South Dakota!?! Apparently, every American from Brighton to Coventry heard about this show. We discussed our various badges, agreeing that my Roxy Epoxy pin would wow the Briefs if they happen to see it. 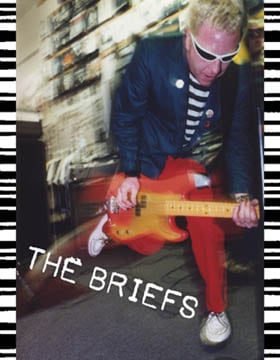 At this point, Lance Romance walked onstage to set up his bass rig. The sight of him was alarming. The episode with Interscope must have taken its toll on him, or perhaps he has acquired a tapeworm, 'cause he was thirty pounds lighter and at least five inches shorter than the last time I saw him. "Lance, you've lost weight!" someone yelled. Lance turned his head and stared in the direction of the comment with a look on his face that said, "Fuck you, I'm in the Briefs." (It turned out that this was not Lance Romance, but a stand-in that took his place while he convalesced from a bizarre stolen kidney incident.)

Issy got the next round of beers. The house lights dimmed and the Briefs took the stage in clothes so tight you could see their camel toes. The air was electric as they pogoed through their warm up, the instrumental portion on the beginning of side two of Sex Objects. Sufficiently loosened up, Chris Brief pounded out the primitive intro to the classic "Poor and Weird." The Briefs' Chorus chimed in, "I'm poor and I'm weird, baby, you got no time for me," and the guitars knifed through the air like rusty switchblades. The pit was a mass of smiling, frenzied faces, giddy with havoc and anticipating the next great tune, which clubbed us over the head in the form of "Silver Bullet." I struggled to maintain mental clarity, but the combination of alcohol and stellar tunes made it impossible. I was caught in a swirling whirlpool of punk mayhem. The set blurred slightly, but I could still make out the crackling "whooaaa-oooohhhs" of "Sylvia" and the clipped "All rights" of "Knife." I looked over my shoulder to check on the missus and Issy. Their tongues were hanging out of their mouths in uncontained fangirl lust for Chris Brief. No matter, I was too busy waiting for the band to play some selections from their unjustly maligned second album, Off the Charts. (All y'all punks that crapped on this album when it came out should revisit it, if for no other reason than the killer "22nd Century Man." My guess is that you were prejudiced by the rumors and conjecture flying around at the time in regards to the band's signing to Interscope. If you let a little thing like major label affiliation keep you from enjoying these songs, you don't know the first thing about music. Never mind that the album came out on Dirtnap, fer kreistsake!) They delivered in spades, with smokin' renditions of "(Looking through) Gary Glitters Eyes," "Piss on the Youth," and "We Americans." The missus snapped out of her daze long enough pogo with me for a song or two, and she nearly punched a bloke who appeared to be letting his latent sexual feelings surface in my vicinity. What can I say? He must've had me mistaken for Chris Brief! 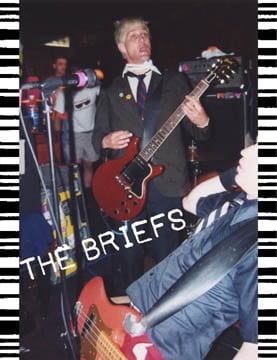 Time for the last songs, and Daniel J. Travanti asked the crowd what we wanted to hear. Hoarse from screaming the title all night, I managed to get a "22nd Century!!!" called out above the din. The request noted and agreed to, the first eight notes rang out and I was shot over the moon. I was singing along, but couldn't remember half the words. Something about blowhards and scientific mistakes. Fuck yeah, that felt good. Keep on keeping on, you Seattle bastards! The song finished and the band played one last song, a cover, I think. I shook my head knowingly at the missus. The set ended and Daniel stopped at the front of the stage to shake a few hands. As he shook mine, I blurted out in truly embarrassing fanboy nonsense, "I'mfromReno!" He gave me the same look Bizarro Lance gave earlier: "Fuck you, I'm in the Briefs!"