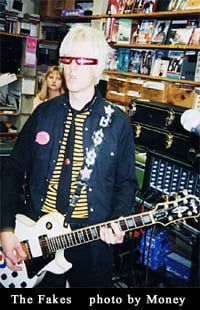 I missed The Briefs at the TSOL show because I was drinking with my amigos at The Frolic Room on Hollywood, so I drove to H.B. to catch them at Vinyl Solution. For once I got to the show early. I wasn’t digging the whole record store vibe of bright lights and no booze so I found a bar and killed some time. The Fakes played first. I think I saw them at Club Mesa once but I can’t remember. The Fakes are something of an O.C. super group (aren’t they all?) with Skibbs Barker on drums (Stitches) Steve Reynolds on bass (U.S. Bombs), Elliot Faux (Abracadaver), Chris Bradley (Throwaway Generation) on guitar and McCourt on vocals (Abracadaver). They were tight and loud which was strange because Barker and McCourt kept going back and forth on which song to play next like they were on incompatible chemicals. Finally McCourt walked out and Barker sang the last song. Quality entertainment. 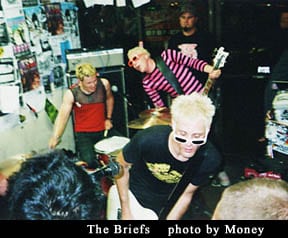 The Briefs were great, almost as good as I remembered them from their 3 Clubs show a while back. If you don’t know about The Briefs, you better find out fast for they are well on their way to becoming The Next Big Thing. The bleach boys from Seattle played nearly everything off Hit After Hit except “Dolly Parton.” You can catch them this fall with The Damned and Swingin’ Utters. Jim Decker of the Crowd was at the show. He bought his kid an Angry Samoans CD and a twelve-pack of Tecate for the boys at Vinyl Solution.

NORMALS, THE: Vacation to Nowhere: LP