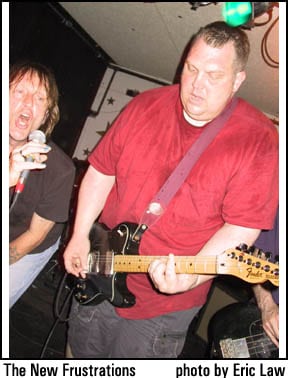 The umbrella that is rock’n’roll is big enough to cover a pretty huge variety of bands and artists. Here’s a sampling of three very different bands, all of whom are making a name for themselves in the sticky-floored rock clubs of greater Boston.

First up are The New Frustrations, who have risen from the ashes of ‘90s punk greats, The Johnnies, to bring a fresh new pop sensibility to an era which was beginning to become overrun by lo-fi garage fuzz. They’ve got a demo recorded and are shopping for distribution. In the meantime, they’re bringing their hook-filled The Jam meets The Pointed Sticks schtick to every barroom and basement party from Plymouth to Somerville. Fueled by the passion of rhythm guitarist Timmy Frustration (aka, Marsman) and the twin lead vocals of Dicky and Mikey Frustration (not to mention the ultra-coolness of my personal favorite, Tommy Frustration), The New Frustrations are definitely going to be making some serious noise. Remember, you heard it here first. http://www.newfrustrations.com/ 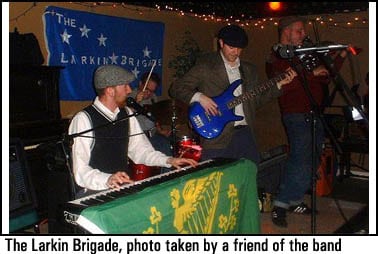 Then there’s the high-speed Celtic balladry of The Larkin Brigade. These guys are all former hardcore veterans (around here we pronounce it “hahdcoah”), who grew up listening to traditional Irish music in their Dorchester neighborhood, south of Boston. What they bring to the pub, and to your CD player via their new release Paddy Keys for Mayor is more traditional Celtic than, say, The Pogues or Black 47, but played faster than you might think possible. Piano-playing front man Paddy Keys sings with a pleasantly real-sounding tenor that brings a live feel to the entire recording. The Larkin Brigade are equally at home at an outdoor Irish music festival or a dimly lit dive in Quincy. http://www.thelarkinbrigade.com/ 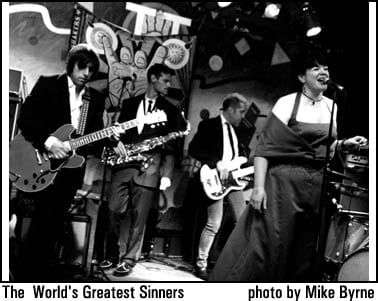 Lastly, but certainly not least, is The World’s Greatest Sinners, among the forefront of the Northern Soul revival. Start with an honest-to-goodness horn section and a rhythm section featuring the original drummer from the legendary Outlets, add the ultimate guitar player’s guitar player (the one and only Tony Savarino), and then top the whole thing off with the powerhouse vocals of Miss Jordan Valentine, and you’ve got yourself one hell of a dance party. Valentine is part Billie Holiday part Otis Redding part Varla Magazine girl. And did I mention the band is hot? They play forgotten soul classics like they were all born in Memphis, and if you don’t dance when they’re playing, you probably need to get yourself a blood infusion, stat. http://www.worldsgreatestsinners.com/