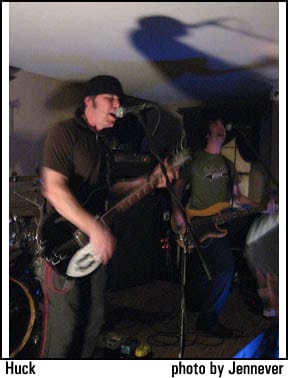 I took my Dad to his first ever rock ’n’ roll show on Friday, January 27, 2007. Now, to be fair, it wasn’t exactly a hardcore show, but still. Previous to this, the closest he’d come to seeing live rock music was Willie Nelson in an amphitheater. But a couple of weeks ago, I had given him a copy of a CD by the Bee’s Knees, a band that delights in mixing mid-‘70s album rock with late ‘60s country rock and whole lot of beer. My Dad really loved the CD, so when I saw that the Bee’s Knees were playing an all ages show at one of my favorite venues in all of the 508 area code on a Friday night, I figured, “Hey, why not invite the old man?” The other bands on the bill were Thinner (kind of a Brit-pop trio with more edge than you might expect and some really strong songwriting), Huck (who I’ve never actually heard, but who’ve been described to me as “hard pop”) and Brilliant (who I didn’t know anything about at all).

Now, you have to keep a couple of things in mind. This place is in the middle of a very small town in almost the exact geographic center of Massachusetts. When I say “very small town,” what I mean is one of those towns where everybody knows everybody else, where no one ever moves out of town unless it’s to the next town over, and absolutely no one ever moves there from anywhere else. It’s the kind of town where Frank Capra would have set a heartwarming movie starring Bing Crosby and Jimmy Stewart as long lost brothers who come home from the war to find that absolutely nothing has changed while they were killing Krauts and being shot in the buttocks and receiving Purple Hearts from the President in a tearful ceremony in the White House Rose Garden. Also, you need to realize that my Dad is seventy-five years old. He’s a healthy seventy-five, but still… seventy-five. Lastly, when I say it’s an “all-ages” show, I don’t mean eighteen plus or even sixteen plus. I mean ALL ages. The last time I was at this place there were kids as young as seven. This time the youngest I see is about eleven or twelve. That means there’s a span of well over sixty years between the youngest and oldest people in the room. And while my Dad is certainly the oldest, he’s not the only guy over sixty.

When we arrive, there’s this sixteen-year-old kid and his dad on stage. The kid’s playing a Stratocaster and his dad’s playing a fender electric bass. They’re doing what amounts to a Stevie Ray Vaughn tribute, and actually a pretty decent one. The kid can play, no doubt. I’d like a bit more variety, and it’d be interesting to hear him play something he didn’t hear on a twenty-year-old record from his Dad’s collection, but he is just a kid. My Dad digs it, even if it is louder than he expected. I tell him to hang on. Once the real bands get started, it’ll be much louder.

The kid played longer than he was supposed to, so the Bee’s Knees don’t get started until almost 10:00. That’s no big deal, except that it means all the bands are going to have to cut their sets short. It also means less time in between bands for socializing and for me to introduce my Dad to the various band members, many of whom are friends of mine. I had kind of been depending on the between band meeting and greeting as being the highlight of the night for Dad. He loves that kind of stuff; meeting new people, shaking hands…and he’s really good at, too. He’s got a knack for making people like him by genuinely liking them first. It’s almost magical. I do get a couple of quick, yelling-directly-in-the-ear introductions to John Donovan (Bee’s Knees’ bass player, Brilliant’s lead guitar player), Michael Thibodeau (Bee’s Knees’ lead singer/rhythm guitarist, Huck’s keyboard/rhythm guitar/backup singer) and Neil Lucey (Thinner’s bassist/lead singer), but I’m not sure my Dad heard a single word any of them had to say. 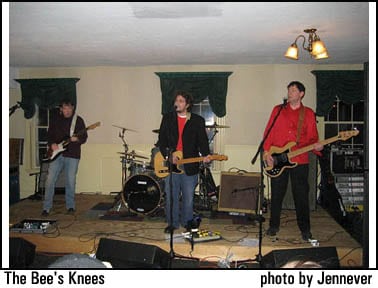 Bee’s Knees’ set is short and sweet, tons of harmonies as well as some manic guitar-hero shredding from Ed Barnett. I think he’s trying to show the Stevie Ray Vaughn kid that there’s more than one hot shot guitar slinger in town, and that the older guy might even have a few tricks up his sleeve that the young stud hasn’t seen before. In any event, my Dad spends the whole set tapping his feet, even stands up a couple of times. He’s all smiles and applause when they’re finished, and he says, “Is that it?” like he wants them to go all night. I’m pleased that he’s so pleased.

We stick around for Brilliant (which consists of two members of Bee’s Knees on different instruments plus two other guys I don’t know) and for Thinner (who rock a lot more than I expected, but still not too much for Dad), but then bail before Huck. Which is too bad, ‘cause the photos I’ve seen make it look like they might be just exactly the kind of band I like best. But, regardless, it’s a good night for me and a good night for Dad.

Is there a moral to this story, a message, a Frank Capra style ending? Not exactly. But I did have a good night hanging out with my Dad, and I believe he had a good night hanging out with me and getting a little taste of what it is that draws me to stay up to all hours of the night in clubs and bars, usually hours from home. When I was little, I was always trying to see inside his world by hanging around while he drank Miller High Life at his buddy’s kitchen table. Now I’m an adult, and it seemed important to try to show him a little bit of the inside of my world. The main thing is this: I don’t know how many more years he’s got, and I don’t want to be left wishing I’d given more of my time to him.