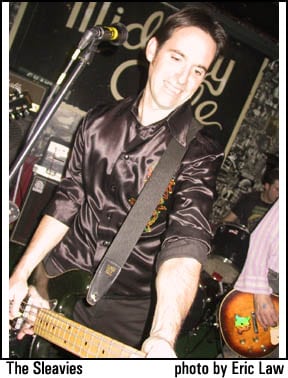 I saw The Sleazies for the first time about a year ago, opening for the Plastic Letters. Red Invasion was also on that bill. The Sleazies were better than either of them: louder, faster, catchier, more ferocious and, yes, sleazier. Seeing them now, a year later, again on a bill with Red Invasion, I’m struck by how much better they’ve gotten. For sheer degenerate joy, there is not a better way to spend $5.00 than seeing The Sleazies at The Midway Café in Jamaica Plain, Boston. Red Invasion may have had more people slamming and rolling around on the floor, but The Sleazies are definitely the better band. 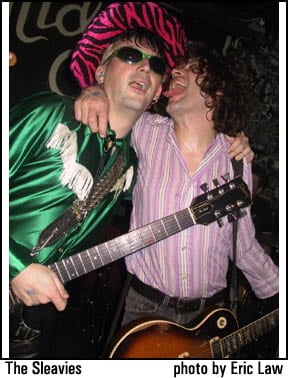 Highlights of the set: “I Wanna Fuck Your Mom,” by request; “Glue Sandwich”; a drooling, steaming version of Devo’s “Mongoloid”; my personal favorite Sleazies song, “Runaway Joni,” about a girl who gets caught stealing some Drano for herself and her boyfriend but manages to outrun Officer O’Malley despite her too tight pants (unfortunately, she later gets caught stealing a wedding ring, leaving our hero without anyone to get stuff for him); and, of course, their theme song, “Gonna Operate On Myself.” 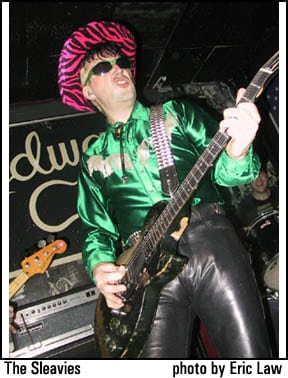 Somehow, despite the crappy sound system that seemed to totally confuse Red Invasion and opener R2Detox (who are not nearly as interesting as the name might imply), The Sleazies still delivered an amazingly sizzling set of two-minute three-chord odes to everything your parents ever warned you against. Brilliant!