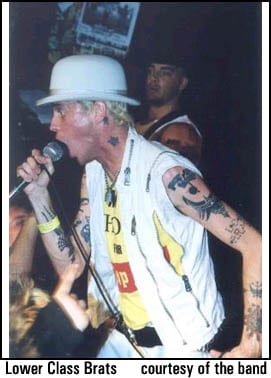 Lower Class Brats come from Austin, Texas, but they don’t sound anything like Willie Nelson. Their music is a combination of street punk anger and Rolling Stones swagger. They’ve got a new record out on TKO, called The New Seditionaries, and there are definitely some seditious themes and undercurrents. But the main thrust of the Lower Class Brats has more to do with simply being outsiders than it does with trying to bring down the establishment or incite any sort of rebellion. And beneath any socio-political messages they may try to get across, there is always the element of pure rock’n’roll abandon and wanton disregard for the status quo.

There are four of them: Bones on vocals; Marty Volume on guitar; Evo on bass; and Clay on drums. Evo and I had the following e-conversation.

Pictures courtesy of the band

Brian: I'm listening to the CD, The New Seditionaries, and even though there are some serious songs about serious subjects, I'm getting the impression that you guys are having fun. Is there a conscious attempt to not take yourselves too seriously? Do you think there are some bands that would benefit from lightening up a little?

Evo: Of course we don't like to be all business-like and stern with our "message,” whatever that is. A lot of what we write is based of true incidents that one or all of us experienced. Like Bones falling down, or Clay getting us lost, oh… wait a minute, that's someone else. Can't name names, but driving around in Europe really was a great learning experience and there has been so many finer moments that we just had to put in down in song—such as “P.G.L” and a few others. Some bands, or, maybe, genres of music, are very serious to the point of either crying or shooting themselves! We don't cry!

Brian: Tell me a little about how the band came together and who was in what other bands.

Evo: Bones started with the idea of creating a big middle finger to all the crap that was saturating the radio and music scene in Austin. This was back in ‘94. Marty was in a band called The Cov'rs and they did covers. I think they hid under the covers, but when Bones ignited that spark, they came running! They, being Marty and Rick, who was the original bassist. I'm the fourth one. Clay was in a few other San Antonio punk bands. Actually, both of us were in The Strap-Onz (now Complete Control) at one point. So, that's a basic history. Being in this band is the one that has been the best and I think it shows with our live shows and our song writing. We like it. 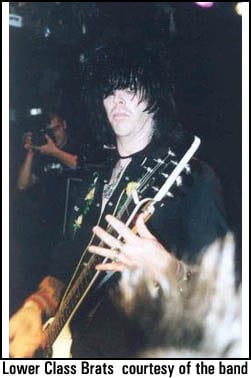 Brian: Austin is legendary for its independent music scene. Is there much sense of camaraderie between bands playing different styles of music?

Evo: There is, especially with other punk and rock bands. We are all in the same boat, so to speak. We congratulate each other and support the scene. There are still other types of music in Austin, like country and western, hip and hop. They play their music and we do ours. Everyone drinks beer so it's cool.

Brian: How do you describe The Lower Class Brats to someone who has never heard you play?

Evo: It's like the Ramones and basic rock’n’roll riffs with a definite ‘70s feel to it all. All balls and no fluff.

Brian: Who was the biggest musical influence on you personally?

Evo: I don't know. I've been exposed to so many types of music over the course of my life... early Judas Priest and Iron Maiden to Ramones and Slayer and Geto Boys. It's such a wide variety. All I can honestly say is that if it's aggressive and has an easy-to-follow rhythm, it's my music.

Brian: Name one band or musician that you like or admire, but who the other Lower Class Brats can't stand.

Evo: I can't do that. This is the hardest question I have ever had to answer. You're making me want to listen to emo music and kill myself! No, I'm kidding. One band that probably hates us is Nickelback. Or, maybe Godsmack or Stonesour or Grapes For All. Oh, I like Absu, but Bones hates it. Clay likes this noise shit called Sunn-O, but I want to rip out my ears when he punishes me by playing it. Marty, well, Marty plays very safe AC-DC and Motorhead... ONLY! So, he's okay.

Brian: When you played Europe where did you get the best reaction? Any really bad experiences?

Evo: The good: Netherlands, Germany, Spain, and France. Well, really, everywhere we played was a great show with enthusiastic crowds. Even in the remote city of Ljubljana we got a good response. The one single bad experience occurred when we were driving from Austria to Switzerland. The time was about 1PM and there was light snow falling along the highway towards Geneva. We arrived at the Swiss checkpoint and were told we had to go through customs. That was going to take at least three to four hours. We didn't have time to wait. So, we decided to drive around to another checkpoint which was easier to cross. The only catch was that we had to kind of drive over a higher elevation. More snow. Some ice. Partial blizzard conditions and bald tires made for a white knuckle driving experience. The further up we went, the more it snowed. Hell, we just about slid off a cliff, spun around on the small road, and dumped our driver. We put on useless tire chains and crept back down the mountain. Eventually we made it to Geneva and battled Swiss skins for dominance at the gig.