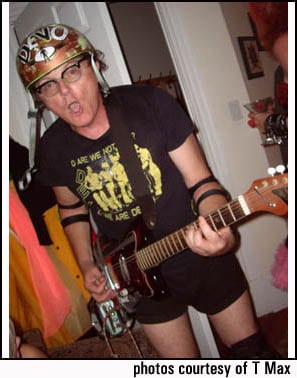 The world of music zines is one of fleeting moments and constantly changing titles and formats. It is highly unusual for one of these independent publications to last more than a couple of years, usually with an irregular publishing schedule and a very limited circulation. It is virtually unheard of for a zine to be commercially profitable. All of which leads one to view with amazement and admiration the accomplishments of Tom Maxwell, aka T. Max, publisher of The Noise. For twenty-five years T. Max has not only consistently published ten issues of The Noise every year, with a circulation of five thousand, he has (astoundingly) made a living doing so. For a quarter century The Noise has chronicled the independent music scene in and around Boston, always under the direction and following the guiding vision of T. Max. It has been an honor for me to have been a small part of The Noise over the last couple of years, and to have had the opportunity to meet many members of the local scene, including T. Max himself. Following is an interview I recently conducted with T. Max.

Brian: I read in the 25th Anniversary issue that you essentially started The Noise as a way to promote your own band. Tell me about that band.

T. Max: That was The Machines—a three-piece band that leaned towards Devo for its enjoyment. Our first gig was at the Paradise—following GG Allin. By the time we came on, the stage was covered with shaving cream. We released a double-A sided 7” vinyl single in 1981 of “Disposable Music” and “Analog” that got a decent amount of radio airplay in town. Oedipus of WBCN especially liked “Disposable Music” because it was about vinyl records. The single was produced by Charlie Stark (aka Charlie Esposito), a freak from Martha’s Vineyard who is still at it in the band Kahoots (and they’re still releasing vinyl). The Machines were on the cover of issue #3 of The Noise (Nov ‘81). By Christmas of ‘82 the band broke up, but I really enjoyed meeting the best musicians in town and it felt good to be able to do something for them. So I continued producing The Noise on my own.

Brian: Speaking of G.G., what’s the weirdest thing you’ve ever seen on a local stage?

T. Max: I’d say Yukki Gipe from Bullet LaVolta (now Kurt Konk from The Konks) lighting his hair on fire. That showed me that Yukki was willing to give up his life (or at least the skin on his head) to put a show on for probably 150 people in a small club (Green Street Station). What if it burned his skull to a crisp? He would have made headlines across the country. Instead, I’m about the only person who still talks about it… I’ve seen G.G. perform but he didn’t crap on the stage and fling it at the audience like he started doing later on. He was rough with his audience in a very unpredictable way. I saw him go up to a girl in the audience as if he was going to kiss her, and then at the last moment he’d grab her by the hair and smash her head into a wall. Pretty disturbing. 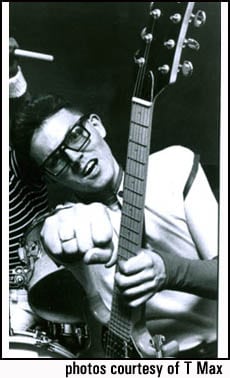 Brian: Did you have any experience with publishing prior to The Noise?

T. Max: Nope. But I had gone to art school and took classes in every different medium there was, so laying out a magazine seemed pretty simple to me. I laid out The Noise with the old cut and paste method. All the text came out of typewriters and was resized at copy stores. The bodies of text were cut out with scissors and pasted up with glue sticks. Teddy Virgin (The Machines’ bassist) xeroxed the master sheets at his job for free, and we’d have a pizza collation party to get all the pages in order and stapled together.

Brian: Do you still do the layout work yourself, or do you have people to do that for you now?

T. Max: I still do the layout. For a short time in the early ‘90s I had Eleanor Ramsay (who went on to be a Boston Rock Opera producer) help me with the layout, but I still did the bulk of it. One issue was laid out by Madge Weigle (Trojan Ponies) because I had been in a bad car accident and Madge stepped up for me.

Brian: Has the physical appearance of The Noise changed much over the years?

T. Max: The first thirteen issues of The Noise had a more elaborate header design on the cover. It was a five-valve trumpet combined with the back end of a pen (replacing the trumpet’s mouth piece), and there were five little people dancing on the valves. Those five dancing people are still on the cover of every issue. The design since then has gone through subtle changes but has basically stayed the same. The most recent change (in the 25th anniversary issue #264, Sept ‘06) is probably the most drastic in that the header is no longer enclosed in a black-outlined box. The number of pages started at five and now we’re consistently publishing forty-eight pages. Between May ‘84 and Aug ‘87 I had a sweet deal with an independent printer who used nice heavy weight paper but that guy eventually discovered there was more money in cleaning fish tanks, and I was forced to find a real printer and switch to what was affordable—newsprint. I guess it is worth it to mention that the pages of those first thirteen issues of The Noise were stapled together up in the left corner. Now the stapes are on the spine.

Brian: Of all the local bands and musicians you’ve covered in The Noise over the years, who’s gone on to the biggest national success?

T. Max: I’d guess that would be the Academy Award-nominated Aimee Mann. We covered her first band, the Young Snakes in 1981, and her next band, ‘Til Tuesday, that skyrocketed in 1985 with the coming of MTV and the “Voices Carry” video. Gary Cherone (covered in 1982 in The Dream at WBCN’s Rumble) is right up there too, with a lot of fame from Extreme (“More Than Words”), and later went on to sing with Van Halen. Then there’s Reeves Gabrels who we featured in Life On Earth (issue #38, June ‘85) and The Atom Said (issue #104, March ‘91)—he went on to write and perform with David Bowie in Tin Machine. Oedipus from WBCN was on the cover of issue #2 (Oct. ‘81) and he became the nation’s most popular Program Director. Oedipus hosted the first-ever punk rock radio show, Nocturnal Emissions. Mark Sandman (Morphine) received a lot of coverage from us while he toured the world until his untimely death on stage outside of Rome, Italy on July 3, ‘99. I’d also have to mention The Pixies, The Mighty Mighty Bosstones, Throwing Muses, and The Dresden Dolls. I know I’ll hear from all the other stars I forgot to mention.

Brian: What band from the last twenty-five years of Boston rock did you think would have national success, but didn’t?

T. Max: There are a lot of them. Concussion Ensemble (early ‘90s) was a mostly percussion outfit that made your chest thump. Their live shows were spectacular—three complete drum sets lined the front of the stage, and the back wall was the largest percussion set up (by far) that I’ve ever seen on stage. The guitarists stood between them—and Rich Gilbert (the lead guitarist) won more Maxies (The Maxies are The Noise’s annual awards, like the Grammys, only much less serious and much more fun.) than any other Boston guitarist. Scarce (mid ‘90s) was a wild three–piece that played with more vigor than almost anyone. Chick Graning had the right voice, look, and stage presence to be a mega star. A brain aneurism slowed his career down. Check out the song “All Sideways” if you can find it. Count Zero—they’re still playing. They formed from the ashes of another great Boston band—Think Tree. Count Zero, led by Peter Moore, continues to create quality music of their own style that rides the crest of modern releases. Other bands that deserved national attention: The Zulus, The Cavedogs, Turkish Delight, Otis, Jack Drag, The Shods, The Pills.

Brian: What do you think is the main reason The Noise has lasted for twenty-five years, when most ‘zines are lucky to last twenty-five days? 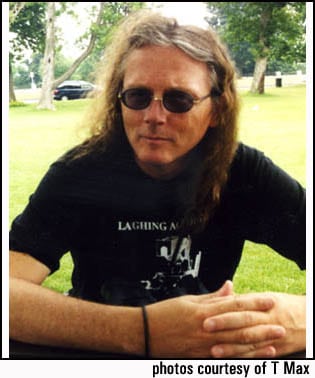 T. Max: 1. The Noise always flew under the radar of some of the big papers in town that liked to shoot down budding magazines/newspapers. The Noise kept a low profile and sorted out advertisers that couldn’t afford to advertise with the media giants.

2. Small slow growth kept the ‘zine strong. I always felt like a business should move slowly. Develop a thick, sturdy trunk before it got into branching out. The Noise is still like a stump—it would be hard to knock it over.

3. Because I made this my sole income. I was too frightened to actually get a real job that I would hate. Better to be a poor fanzine bastard than to sell my soul to a corporation.

4. I have always enjoyed doing The Noise and I let myself have the freedom to change my focus and routine whenever it felt right. For a couple of years I stopped going out to see bands because I was burnt out doing that. I chose to focus on the layout instead and let the writers have more say in who was covered. Now, I’m constantly looking for new readers—kids in high school bands is a good new audience to develop.

Brian: Can you compare Boston, historically, with other cities in terms of rock and roll music?

T. Max: Throughout my time in Boston I have concentrated on local bands. There used to be a joke about me… as soon as a non-local band took the stage I’d have to leave the room. So my information about what goes on in other cities is limited. The most frequent thing I hear from musicians who move to other cities is that there is nothing like The Noise there. One thing that may hold Boston back on the major label front is the strong sense of community and the communication level between bands. The Noise helps and encourages this communication. Major labels liked to snip up ignorant new bands so they could take advantage of them with unreasonable contracts. I like to believe that started happening less because musicians are more informed here. Now it doesn’t make any difference with what the Internet has done to music. Bands are on their own to be as creative as they can be with an awfully big audience. Problem is there are also a billion more bands competing with them. Where you’re from is less important when you’re dealing with a cyber-space audience. The Noise websites are the future of The Noise. The Noise-Boston (http://www.thenoise-boston.com/) and The Noise Board (http://www.thenoiseboard.com/) have outgrown the audience of their print media sister. We have readers now from all over the world. I think our little stump has sprouted leaves in cyber space.