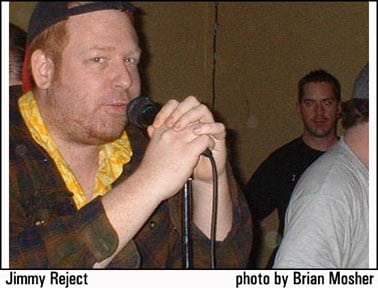 Thirty five years doesn’t seem like enough. But for Jimmy Reject it was more than enough. After battling mental illness for many years, James K. Harrington called it quits. He raised the white flag, cried out “No mas,” and leapt off of this mortal coil into the waiting arms of a cold New England river. Perhaps it’ll be the beginning of something more tolerable for him. We don’t know. We just know that it was the end of a life of suffering. And it was the end of our chance to know him, to be with him. It was also the end of his chance to create. In the end, I hope that what he did create while he was alive will be what we will remember more than the illness and more than the dramatic, untimely end.

Jimmy Reject was a writer. Words flowed out of his tortured mind and into his computer at a pace exceeded only by the driving rhythms of the music Jimmy loved: punk rock. And to Jimmy, punk rock was more than just the music. It was a way of looking at the world, a way of understanding life, and a way of coping with pain. It was through punk rock that he came to understand and accept his need to write. And it was with the language of punk rock that he spun his offbeat, insightful tales. He wrote about teenage lust, drug use, hallucinations, delusions of grandeur, sexual perversions, and anti-social rage. But, most of all, he wrote about the power of punk rock to save the wretched from their pitiful, meaningless lives.

Before that, Jimmy Reject was a drummer in one of the best bands to come from Boston in the entire decade of the 1990s. The Dimestore Haloes were a glorious disaster; not only because of Jimmy’s instabilities. Behind the songwriting genius of Chaz Halo, they created a catalog of glam/punk/power pop gems virtually unequaled by any other bunch of dysfunctional misfits in recent memory. Their collective anti-social tendencies doomed them to an early demise. But we still have the records, and that may be more than we deserve.

Before that, Jimmy was a brother and a son. His family called him Jamie. There were summer vacations spent on sail boats, winter vacations in ski lodges. There were Christmas mornings with presents under a tree, and birthdays with cake and ice cream and candles and wishes. There were proms and graduations. But, eventually, the demons came, and Jamie changed. Or maybe he was always different. Maybe he never fit in, not even in the family that produced him, harbored him, and which now mourns for him.

To me, Jimmy was a friend and a compatriot. We were often each other’s first audience for any new writing projects. We were competitive, to a degree, but supportive of each other always. I wasn’t his best friend, or his closest confidant. There are many who knew him longer and better than I did. And I don’t pretend that I held any special place in his life. But he was special to me, and I will miss him.