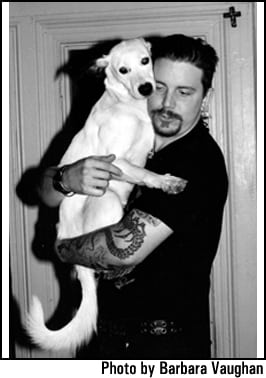 Brian Josef Childers passed away on November 17, 2007 in WashingtonDC. He had just turned 42. The cause of death was organ failure from alcohol abuse.

Brian was an amazing guy, and loved by many people.

He sang in the NYC hardcore band, Crawlpappy. I had the privilege of playing guitar in Brian's hardcore band The Beef People when he lived in Virginia in the early ‘80s. He played bass and sang some in my San Francisco band Bomb for one tour. And he sang in the band Drooler in Berlin.

While living in Germany, he traveled as a tour manager with many bands, including Murphy's Law, Boo Yaa Tribe, The Cords (Netherlands), Fleischmann (Germany), and Mr. Ed Jumps The Gun (Germany).

I remember when Brian lived in the Red Hook section of Brooklyn, which is literally the last exit to Brooklyn, and the setting of the novel by the same name. Rough place, but he felt at home. He showed me the spot three blocks from his apartment where some kid shot him through the shoulder from a distance for target practice.

Brian thought the kid was aiming for his head and missed. Brian Childers was one tough motherfucker, but was still as sweet as a person could be.

Brian also lived in Cleveland, Saudi Arabia, and Athens, Ohio. He has many friends all over the world who miss his enormous spirit, hearty laughter and remarkable mind.

You can see photos of Brian, read more history, and hear MP3s of him singing at: www.kittyfeet.com/beef.htm