Without question, the Bouncing Souls are among the nicest guys in modern punk rock. Their earnestness comes through in their music, their message, even the way they interact with fans. While such humility is refreshing, they will never be accused of being agro, edgy or brash – the hallmarks of punk rock. The not-so-new album “How I Spent My Summer Vacation” is chock full of love songs. True, one is dedicated to a BMX bicycle, but love songs are love songs, and love songs are the domain of pop music, which suggests that the Souls are creeping closer and closer to pop punk. Some might argue they’ve been there for years.

That said, the Bouncing Souls put on a hell of a live show, and those at ‘Canes in San Diego this month were treated to one of their best. Brian and Steve can play any room, big or small, and Greg always looks happy to be there. Unlike many bands, their set list is loaded with songs that go all the way back to the band’s beginnings. “Argyle,” one of their oldest, is a staple of their set and they continue to play tons of tunes off their self-titled (and best) record. But a Bouncing Souls show is anything but dull (during a Punk-O-Rama show at the Palace last year a brawl broke out and Greg announced they would play The Cure songs until the fighting stopped, and they did). In addition to a rousing version of “Blue Moon,” the Souls were joined by Jack and Jim from One Man Army for Cocksparrer’s “Runnin’ Riot.” Sadly, most of the kids who were pumping their fist and shouting “Oi!” earlier in the evening had no fucking clue who Cocksparrer is, and it made me hunger for a Bouncing Souls record that bears a closer affinity to Oi! superstars of old than the poseurs who profane punk rock on MTV today. 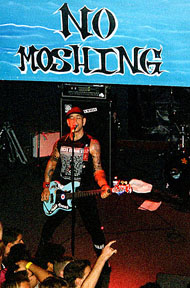 WE MARCH: Life in a Plastic Bubble: CD