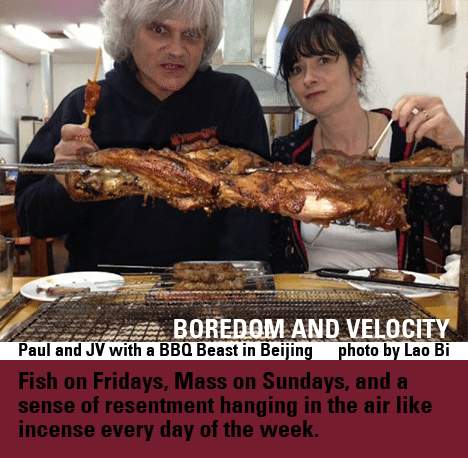 Boredom And Velocity: How I Learned to Stop Worrying and Love Cracker Barrel

I grew up in a textbook twentieth century working class, two-toilet-Irish American home in a Boston suburb: fish on Fridays, Mass on Sundays, and a sense of resentment hanging in the air like incense every day of the week. No one gave a damn about cooking or eating, except for Thanksgiving, Saint Paddy’s, and those rare occasions when my Dad would get culturally confused and make a really excellent lasagna. Sending out for Chinese was an experience so rare and unique that my ten-year-old self wondered if the ensuing sensation as I bit into a chicken finger or dragged an egg roll through a puddle of duck sauce was what people meant by “getting high.”

When I ran away as a teenager and started living with my older punk rock friends, I nourished myself on the stereotypical diet of the disenfranchised: Top Ramen, white toast, and to self-medicate for my unruly blood sugar levels, Nestle Crunch Bars split into miserly two-inch segments and squirreled away from my housemates.

I’m not exactly sure when the desire for real food actually kicked in. Maybe when my first boyfriend took me out for Indian food at a good restaurant and the resulting sensory chaos and delight matched something else I had started feeling at the time. Maybe when I started making relatively big bank during my first summer as a carriage driver in Philadelphia and decided at the urging of a more sophisticated friend to broaden my horizons from Arby’s to sushi. Maybe the first time I ate lamb at a Lebanese restaurant and it actually tasted luscious and identifiable, unlike my mother’s occasional attempts at the dish. Or maybe it was when I realized that I had physiological urges on par with those of cigarette smokers or caffeine addicts to revel in the luxury of a perfectly prepared spanakopita at three AM after a night shift. Food became important: not just sustenance anymore, it represented reward, indulgence, a delicious retribution for every boiled potato and overcooked piece of meat from my childhood.

I’ve since carried that need for quality tastiness with me everywhere in life. It’s the only form of self-esteem I consistently practice. Even on the days when I am at my lowest, I will still prepare a decent meal from scratch and enjoy it with a bottle of cheap wine. Vibrantly awful memories of every terrible decision I’ve made alternate with little affirmative bursts from my palate. Perhaps my entire life is an epic bungle of missed opportunities and wasted potential, but goddamn did I nail this curry. I would sooner put a gun in my mouth than something from a frozen dinner tray. 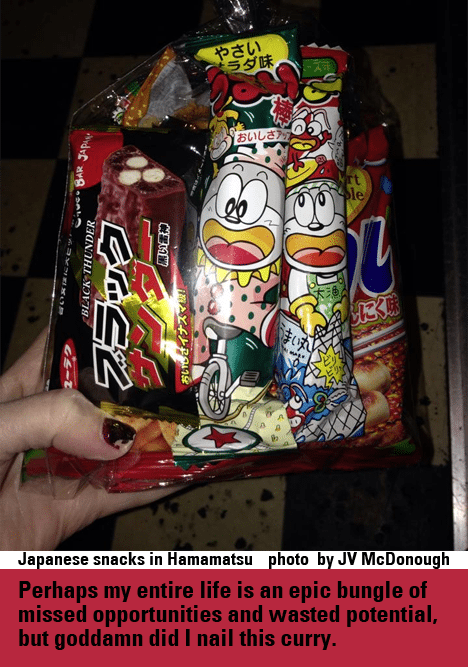 Touring a lot means being at the mercy of your schedule, your wallet, your environment, and your bandmates when it comes to eating. And open-mindedness is a requisite, especially if your travels take you overseas. Those opportunities for culinary cultural adventure have left me with practically masturbatory memories of dinners past: homemade pasta at the apartment of friends in Venezia, a vat of delectable vegetarian stew in the Hobbit-like kitchen of a punk rock house in the Czech Republic, horsemeat sashimi after a show in Kumamoto, and those insanely cheap, indescribably yummy lamian noodles that are a staple of Chinese Islamic cuisine. Trust me, the ramen you get at a roadside restaurant in Japan is a far cry from those tiny bricks of desiccated straw and chemicals we call “Ramen” back here.

But what about back here? Well, that open-mindedness has to go the other way, too. Sometimes there’s only time for Subway. That Sbarro pizza isn’t half bad as long as they manage to warm it up. No time to stop? Here, have some Smartfood: the stupidest choice for those of us who wear a lot of black.

When you live on the East Coast, the first Waffle House you see on tour is the unmistakable signifier that you are close to The Beautiful South. Call it “Awful House” all you want: it’s still a good place to grab breakfast and tank up on coffee. A Hardee’s Thickburger is an exotic treat for this Yankee. And a culinary highpoint of last year’s West Coast tour was lunch at Roscoe’s House of Chicken and Waffles in Inglewood before we departed for our respective homes.

One of the constants of the road is the intermittent appearance of the Cracker Barrel sign that commands “Eat. Shop. Relax.” Depending on time and temperament, I’m usually torn between saying, “Don’t tell me what to do, Cracker Barrel! You’re not the boss of me!” and “Why, yes, that sounds like a capital idea.” Except for the shopping part. There’s something unsettling about the idea of purchasing an old-timey bedspread at a chain restaurant three hundred miles from home, especially when the whole Americana-country-store experience is marred by the discovery that said quilt was actually made in China. It’d be like going into a touristy shop in Shanghai and purchasing a silk dress made by the Amish.

We had a show at Clash Bar in Clifton, New Jersey on Good Friday. A delayed departure from New Hampshire plus the concern that we would hit every variety of rush hour en route kept us moving without sustenance. But after the gig, all of the locals kept talking about hitting up a place called “White Mana.” At first, I thought it was a fancy name for White Castle, pronounced in an unusually Bostonian way for the location. It was explained to me that White Mana is actually the great grandpappy of Jersey City diners, and the inspiration for the infamous White Castle. Hungry and fascinated, I hovered by the exit door of the club in the usual endless Italian goodbying that marks closing time. But like many bourbon-fueled plans for fun, this one fizzled out before liftoff, and Paul and I found ourselves maneuvering the vehicle around the neighborhood, searching for the highway that would take us to Pittsburgh and our Easter Eve gig at Moondog’s. It was on the last stretch of local road that we saw it: White Castle. 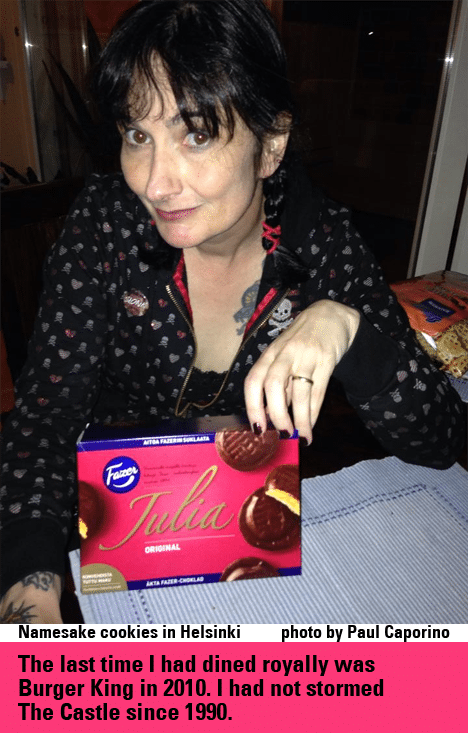 There was only a moment’s hesitation. We were starving, everyone had been talking about burgers, and it was right there. The last time I had dined royally was Burger King in 2010. I had not stormed The Castle since 1990, when every few weeks my urge for sliders would result in a dangerous drunken stroll down Broad Street in Philly to the local Fast Food Fortress of Grease and Regret. Before we could talk each other out of it, there we were in the drive-thru line, ordering ten of the little bastards and a couple of Cokes. I think I had four before finally falling asleep in the passenger seat. Paul killed off the rest as he got us as far as Allentown. While I slept peacefully, the tiny burgers kept Paul unsettled through the night. I posited that it was because I ate my sliders with a certain emotional distance, while he actually just gave in to the gluttonous enjoyment of having something he probably shouldn’t. Sometimes irony is the best antacid.

Cracker Barrel: I find that the topic polarizes many of my touring friends. There are those for whom it is the epitome of All That Is Wrong With This Country: an omnipresent embodiment of prefab down-hominess and jingoism on a plate. And then there is at least one musician I’ve heard of who insists on it being his only acceptable roadside stop.

For the record, I’m down with the Barrel.

At a stop somewhere in North Carolina a couple of years ago, Paul and I were gently schooled by a very enthusiastic Cracker Barrel server about the provenance of their food and the source of the antiques that fill the dining space of every restaurant. Whether he was a genuine Cracker Barrel True Believer or was just bullshitting us, I’ll never know and am too lazy to fact-check. All I know is that their Chicken-n-Dumplins resonate in my pleasure center somewhere between heated slippers and that recurring dream I have about Jeffrey Lee Pierce. And they’re only eight bucks.

Do I have to dull my other senses to enjoy a meal there, blocking out the inevitable new country pablum that’s usually on the sound system and the penetrating gaze of grim, long-dead people staring out from the daguerreotypes hung randomly around the room? Perhaps. Do the large, multi-generational families and the frail elderly couples surrounding us tend to look askance at our disheveled leather-jacketed presence in their temple of wholesomeness? Yes, more often than not. But Cracker Barrel is a soothing familiar friend on our cross-country tours: we know that we can sit down in a clean place, eat something that didn’t sit in its own grease under a heat lamp all day, and sip sweet tea while playing that goddamned peg game that they leave at every table. We deserve it. 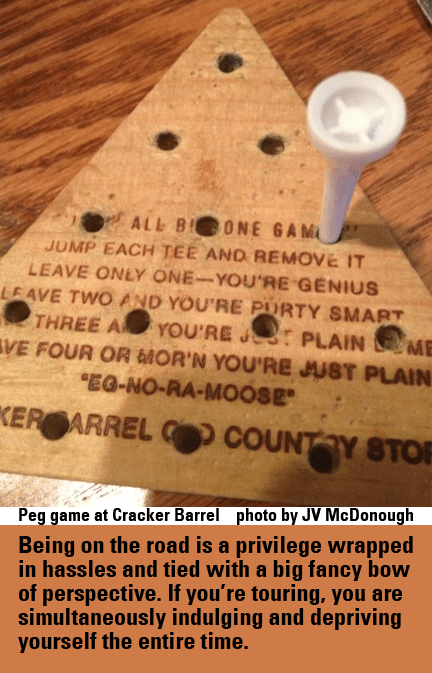 Being on the road is a privilege wrapped in hassles and tied with a big fancy bow of perspective. If you’re touring, you are simultaneously indulging and depriving yourself the entire time. Feel bad about that ten-hour drive between dates? How’d it feel if you were doing ten hours at a desk or in a warehouse? Sitting in traffic waiting to get to the club? What if you were sitting in traffic waiting to get to your cubicle? Feel bad about dropping nineteen bucks for two people at lunch? How much did you spend at the bar last week just on your lonesome?

I can rationalize my way into or out of almost anything: I’ve tolerated and even celebrated some gritty stuff all in the name of being “tough” or living the ol’ punk rock status quo. But as I get older, I realize that being kind to myself doesn’t necessarily equal selfishness or selling out. It just means that I recognize my limitations for discomfort, for inconvenience, for time wasting and disappointments. It means maybe we’ll stay at a cheap motel instead of crashing on a friend’s floor. It means maybe we’ll pass up that really out-of-the-way gig in favor of playing a more familiar club that’s closer to home. It means maybe we’ll eat at Cracker Barrel.

Who am I kidding? We’re definitely gonna eat at Cracker Barrel.
***

J.V McDonough is old enough to be your favorite aunt. She played bass in some Boston bands you never heard of, then joined The RiverCity Rebels (now defunct) in 2010. She now plays fulltime for M.O.T.O. with her husband Paul Caporino. Between November 2012 and the present they have played dates in China, Hong Kong, Japan (twice), Finland, Estonia, Berlin, and dozens of U.S. cities. Click this link to learn more about M.O.T.O. and talk to J.V. via Facebook.