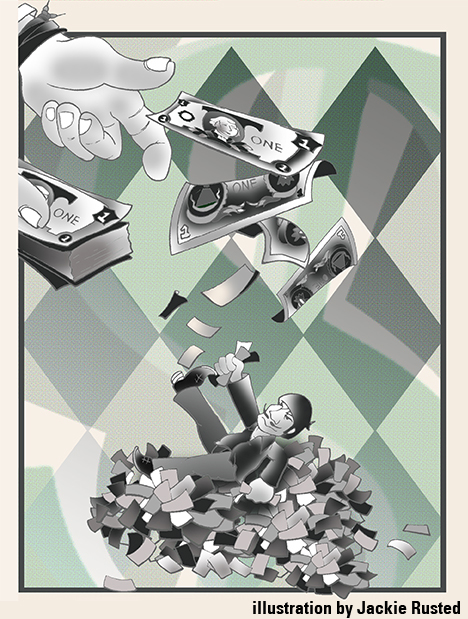 Everyone knows the music business is fucked up. For that matter, all businesses are fucked up. No matter what type of business—whether you’re talking about the restaurant industry or real estate—there’s always a percentage of people in it who are slimy fuckers. This is especially true in the music business. Someone is always looking to take advantage of someone else. They’re constantly thinking, “How can I use this person to better myself?” Someone in a smaller band might tell someone in a well-known band that they are the greatest, in order to get on a big show. Someone with few connections might rub elbows with someone who has more connections, with the hopes of putting their music out on an established label.

I knew of a guy in Saint Louis, where I live, who was a complete slime ball. He went by the name Beatle Bob. He dressed and wore his hair just like The Beatles did when they first came over in 1964. He never paid to get into a show, because he “knew everybody.” That’s all fine and good. Well, sort of, if you like The Beatles, which I don’t. But that’s neither here, nor here. Or, there.

(A funny sidebar about The Beatles. My mom is the “proud” owner of their LP, Meet the Beatles! She asked me to take it to a record store and find out if it was worth anything. I told her it probably wasn’t. The next time I was at Record Exchange (GREAT used record store here in town, by the way), I looked for it. They had a number of them for eight dollars apiece. I broke the news to her. Parents just don’t understand. DJ Jazzy Jeff & The Fresh Prince. BAM!)

Anyway, Beatle Bob did something that is absolutely fucked up. After he would be right up front, cutting his own rug, as they say (he had this dance move where he would pretend to deal playing cards to people who weren’t standing there), Bob would approach the touring band. He would tell them that he could get their record or CD on the local community radio station, 88.1 KDHX, so they would give it to him. After a few weeks or so, they would call the radio station to see how their music was going over with the local audience. It was then that they would find out the radio station had never heard of them. It wouldn’t take long to figure out it was Bob who they gave their music to. He was notorious for doing that. He would actually sell the music at a record store that bought used music, Vintage Vinyl. I first started hearing about this around 2003. My old band would play with touring bands, and they would ask about Bob and everything. We started hearing it more and more. I haven’t seen Bob the last few years. Hopefully, he’s dead or something. Seriously. He was also a kleptomaniac.

Enough about that guy, though. That was just an example of one slimy fucker. Back in January of this year, Dudes Magazine celebrated its ten-year anniversary. We always do a release party for each issue, but for issue twenty, we did it real big. My friend Daren and I put together a weekend of shows to celebrate. Between the two of us, we booked twenty-one bands. It took place over a Friday and Saturday.

Thirteen of the bands were from out of town. We sold enough tickets to pay them all what we had promised. It was definitely the biggest and best show I have ever been a part of, and I’ve been booking and playing shows since I was in high school. I graduated in 1999. After the second night of shows, Daren assured me that we made just enough to pay everyone. That’s all I cared about. Everyone sold a good amount of merch too, so I was satisfied with how it all went.

A few weeks later, I was curious if there was any extra money left over. We had shirts made, and hadn’t taken the sales into account initially. If there was extra money, we’d do something cool with it. Daren said there wasn’t anything left after recouping the cost of the shirts and paying our friend Nathan, who screen printed them. He went into further detail of the weekend for me: The motherfucker who does sound and booking at the place we did the shows at took $150 for sound (which is fine) and two hundred dollars more for his “booking fee.” I knew I didn’t hear that right. Booking fee? My mind was being completely fucking blown. I booked the majority of the bands and Daren got the rest that I didn’t have phone numbers for. He and I booked the whole fucking thing.

Brian, the booking guy, was completely uninvolved. All he did was set aside the two dates for us. Hard work, I know. I asked Daren who paid him. I didn’t wanna be in charge of any door money. I was working the merch table. On Friday, our friend Nicole worked the door. I knew she wouldn’t fork over any money. She gave everything to Daren at the end of the night. But on Saturday, other people were doing the door. Apparently, Brian walked right over to them and said he needed his sound money and booking fee. Then, people actually gave him $350. Unbelievable! We could’ve paid each touring band another fifteen dollars each. That’s not much, but hey.

I was unfamiliar with the term “booking fee.” My mind continued to be blown when I asked Daren about booking fees. Like I said, I have been booking shows since high school, and not once have I taken any money for it. The only money I ever take from a show is money my band got paid. Usually, we end up giving it to the touring bands, if there are any. I asked Daren how long the whole booking fee thing has been going on. He asked me how I thought one particular club owner in town could afford to buy a new house. I guess I’m just completely fucking ignorant to certain things and very naïve, but I know for sure I’ve never heard of a booking fee.

Whenever the club pays you, the guy says, “We took out blah blah blah for sound and blah blah blah for the door man.” He never says anything about booking fees. Is it just understood? Somebody please tell me. Please. And even if it is understood, does someone really deserve a cut for getting certain bands to show up and play? In my opinion, I would say no. What’s the most work involved in that? “Hey, you guys wanna play here on such and such date, with such and such bands?” Wow, that’s grueling. Booking fees for an airline I understand; most people don’t own an airplane. You’re kind of at their mercy if you wanna get somewhere fast. And there’s a decent amount of work that goes into running an airline, or so I would think. But for a show, you can always find somewhere else to play. “You’re gonna charge us to play here? See ya later.”

It’s like the whole “pay to play” thing. Fuck off with that shit. I then found out that it goes on all over town. Every place that does cool shows charges a booking fee. GET FUCKED! That explains the posters and fliers that are put up that say shit like, “Jack Off Productions” or “Butt Licker Presents” on them. GET FUCKED AGAIN! I just thought these guys wanted to see their names on posters or something. I didn’t know it was deeper than that. At least the sound guy and door man actually do something throughout the night. But you make one or two phone calls, or just ask a dude in person if they can come back on whatever date, and you deserve money? Get real. I deleted a few phone numbers once I heard all of this. See you later, assholes. The guy who ran the place I did our Issue 19 release party at took a cut that night and wasn’t even there. We had to set up the P.A. ourselves. Fuck You, Johnny Vegas! He was supposedly home with pink eye that night. Good to hear.

At this point, I was pissed at Brian and every other place in town. I also felt misled, confused, and angry. I decided then and there that I was never gonna book another show at a bar or club again. Any time a touring band needs a show in Saint Louis, they can play in my living room. Chill Dawg Cove is the party zone! You will get all the money, fed, and drunk—and have a great time. Spread the word.

If my band gets asked to play at a club or bar, that’s fine. What are we gonna do, turn down every show we get offered? There aren’t many house shows in town. But I am not dealing with club and bar owners anymore. FUCK YOU! If anybody deserves anything close to resembling a booking fee, it’s the dude who makes fliers, hands them out, and goes around town putting up posters for the shows. When I set up a show for a touring band, I make fliers (albeit shitty ones, but that’s just because I have no capabilities in the art department) and posters, hand them out and put them up. I just generally spread the word about the show. Do I go up to the door guy and ask for my booking fee? FUCK NO!

I don’t have much else to say here, but all of this is still troubling to me some two months later, after I first heard about it. That night, I said, “That’s gonna be the next column I write for Razorcake!” I know the world is fucked, but is it completely fucked? I guess so. I thought we were all in this shit together, but I guess not. Some people just gotta get paid. And to those people, I say “Fuck you.” And oh, the name of the place we did the fest at is Lemmons. NEVER BOOK A SHOW THERE, AND NEVER LET ANYONE YOU KNOW BOOK A SHOW THERE. 5800 Gravois, Saint Louis, MO. NEVER.