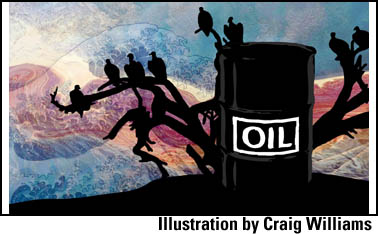 In legal terms, corporations are fictitious persons. Consequently, corporate news is fictitious news. If you want news that’s worthy of the nonfiction title, Greg Palast is your best source. In this latest volume of reporting, Palast brings readers along with his relentless investigative team as they pursue “the Energy-Finance Combine.” The investigations stretch across the globe, and each chapter is a portrait of the economic elite strangling people who work for a living.

When British Petroleum’s Deepwater Horizon rig exploded in the Gulf of Mexico in 2010, Palast was reminded of the 1989 Exxon Valdez oil-tanker disaster in Alaska. He had investigated the Valdez case and rejected the official story, which blamed the ship’s drunk captain. Palast found that the guilty parties were really the executives at Exxon, the owner of the tanker, and at Alyeska, a company created by the major oil firms to oversee safety.

Safety measures required by law—and by the oil companies’ land-purchase agreements—were ignored. There was no escort boat, counter-spill equipment was not in place, and the ship’s radar was turned off. To cover up those violations, Big Oil repeatedly lied to the authorities in the months before the spill. “The companies promised twice, in writing, to the state, that they would put out the [counter-spill] equipment,” Palast writes. “But it wasn’t there. Not having it there meant jacking the regulators.”

So Palast discovered a mass of evidence indicating fraud, racketeering, and breach of contract. What was the result of his efforts? Prosecutors filed no charges against oil bosses. Exxon and its executive in charge of the Valdez case, Otto Harrison, contrived to pay for only a fraction of the damages caused. A suit by fishermen whose livelihoods were destroyed by the spill took 21 years to get through the courts: a lower court awarded them $5 billion, but the U.S. Supreme Court cut that amount by 90%.

As for the companies behind Alyeska, including the major partner, British Petroleum, they avoided financial responsibility altogether. Palast notes that the oil kingpins and their stockholders drew a (financially) valuable lesson: “It’s a heck of a lot cheaper to pay off the victims than to prevent spills.”

After the Valdez disaster, the petroleum firms took their carnival of spills to other ports of call. In the Deepwater Horizon case, the trigger was shoddy quick-dry cement provided by Dick Cheney’s former business partners at Halliburton. Eleven workers died in the resulting explosion, and the Gulf may never recover, but BP will pay for only a portion of the true cost. The tactics are the same as in Alaska. Regulators and independent scientists who get in the way are demoted or fired, while the public is treated to a parade of politicians, “journalists,” and “experts,” owned by the oil companies. As for the clean-up, it’s mostly fake, and labor is cheap for BP because many Gulf residents were financially ruined by the onslaught of oil.

Vultures’ Picnic provides a detailed tour of the web of corruption tying oil companies to brutal dictators, as well as to each other. A telling case is that of Azerbaijan, a former Soviet republic in Central Asia, which broke away from Moscow’s rule only to fall under the control of Big Oil. BP bribed its way to a deal that grants it a virtual monopoly of the country’s oil wealth. The deal also keeps Azerbaijan’s dictator and his wife in luxury goods, while the people live in poverty under a police state. Her Majesty’s Government readily assisted the oil company’s takeover bid: British intelligence worked hand-in-hand with BP corporate. “Once upon a time, British Petroleum was an arm of British imperial power,” Palast explains. “Today, the British government is an arm of BP’s imperial power.”

The Energy-Finance Combine also includes a resurgent nuclear industry. Hidden in President Barack Obama’s 2010 appropriation to provide body armor for U.S. troops is $9 billion to build nuclear plants on the Texas coast. One of the companies involved in the project is responsible for the nuclear facility that failed in Fukushima, Japan in 2011. But, again, the problem does not lie with just one company. Noting that he has “investigated dozens of nuclear operators,” Palast writes: “Fraud is as much a part of the structure of a nuclear plant as the cement and steel.” Maybe the president and his financial backers figure that Gulf residents crave variety in their energy-related catastrophes.

Moving from ruined and endangered coastlines to the centers of international finance, Palast traces the ongoing series of economic collapses. Sources sent him a particularly interesting memo, written in November 1997 by Timothy Geithner, then a high-ranking official in the U.S. Department of the Treasury. (He is now secretary of the treasury.) In the memo, Geithner refers to “the end-game of WTO [World Trade Organization] financial services negotiations” and calls for consultations with the CEOs of some future bailout recipients, including Goldman Sachs and Bank of America.

What was the “end-game?” At Wall Street’s behest, the U.S. Treasury team and the World Trade Organization revised a treaty called the Financial Services Agreement, thereby “forcing every nation to remove restrictions and old-fashioned safe-banking regulations.” That’s how banks and pension funds in foreign countries got stuck with junk securities created by American financial giants. It’s also how the meltdown of 2007-08 spread so quickly from the U.S. to the rest of the world.

How did the Wall Streeters and their allies get other nations to follow the disastrous new policy? They used trade as a weapon:

“Ships could pass only if the papers were signed. If a nation wanted to sell American goods, they would have to swallow American bads, the derivatives, swaps, and all the other exotica coming out of the mad bankers’ laboratories.”

In other words, the same people who tell us that we can’t restrict imports made by slaves, political prisoners, or children, because that would be against “free trade,” restricted imports and exports so Wall Street could sell bogus securities in foreign countries. That’s all you’ll ever need to know about the ideology of “free” trade.

Palast’s discoveries led to a chilling interview with the director-general of the World Trade Organization, Pascal Lamy. When the journalist showed Lamy the Geithner memo, “the Frenchman grinned so hard I thought his face would crack.” The director-general answered Palast’s questions about the WTO with a barrage of the usual slogans: “It’s about freedom, about human rights, about technology, about media, about political civil liberties!”

Back in the U.S., bankers’ attack on regulation focused on the Glass-Steagall Act of 1933, which insured customers’ deposits and barred banks from gambling recklessly with that money. The law prevented a major financial meltdown for over six decades, but Wall Street was itching to play with those taxpayer-guaranteed deposits. The issue came to a head in April 1998, when Sanford Weill, and his financial firm, Travelers Group, acquired Citibank. “Weill picked up about half a trillion dollars in Citibank assets,” Palast notes. “Brillant—and against the law.”

Not for long. President Bill Clinton and his treasury secretary, Robert Rubin, pressed Congress to repeal Glass-Steagall. Clinton signed the repeal bill in November 1999, by which point Rubin had a new job, co-chair (along with Weill) of the new company created by the merger of Travelers Group and Citibank: Citigroup. The compensation package was generous: “Rubin picked up $126 million in payments from [Weill’s] now-legal operation.” Later, Wall Street picked up trillions in bailouts for losses on crazy bets formerly prevented by Glass-Steagall.

Americans could avoid many ugly surprises if they learned this lesson from Palast: “Regulation, the rules they tell you to hate, are the way we apply democracy to the economy. Votes versus dollars.” As the battle to apply democracy to the economy proceeds, Vultures’ Picnic offers a detailed intelligence report on the enemy’s positions and tactics. If you support the goals of Occupy Wall Street, if you were outraged by BP’s frenzy of destruction in the Gulf, or if you simply want to know your chances of acquiring a fluorescent, nuclear perma-glow, this is your book. (Dutton, 375 Hudson Street, NY, NY10014, www.gregpalast.com/vulturespicnic/)

If you’d like to read an excerpt from Vulture’s Picnic:
/archive-read-an-excerpt-from-greg-palasts-new-book-vultures-picnic-with-an-introduction-by-chris-pepus