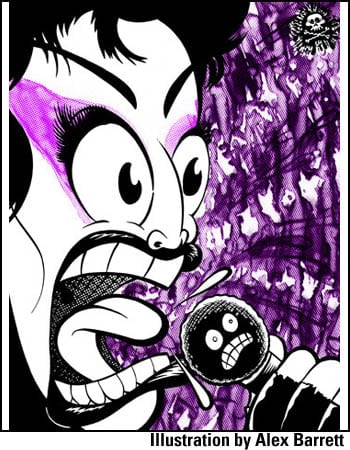 If I were mayor—or at least a director of the Parks and Rec.—I’d erect a statue of Alice at her choice of park. I see Alice as one of the patron saints of L.A.’s first wave of punk rock, a woman who is right in so many ways, who has lived and played hard, and who still has a healthy attitude towards music. Beyond that, she’s just a nice person and that comes across in these pages. Many weirdo-cruster first-wavers, it’s best to think twice about inviting them inside your home.

That’s the hook of the book. It’s a memoir of a bad-assed punk lady who isn’t an unholy fuckface whining for deferred glory and overdue royalties. Here’s a lady who’s both living and telling a unique, compelling story.

Violence Girl is the birth-to-becoming-a-teacher saga of Alice growing up in tough, poor surroundings in East Los Angeles, her infatuation of music at an early age—and Elton John in particular—into the formation of a band that many punks know her from: The Bags. She was front row and center stage with the emergence of punk rock on Southern California shores. Not only was she a lead singer of an undeniably influential band, she lived amongst the punk swarms in the Canterbury Apartments and partied in the Masque. When The Bags got crumpled up and tossed aside as a band, she continued on—both with her schooling and continuing to play music in the harder-to-find Castration Squad, the wonderful Las Tres, Stay At Home Bomb, and Cholita.

There are many joys in this book.One of them is how vulnerable and candid Alice is with the reader. She conveys being awkward, gawky, and unsure in ways that many people reading Razorcake can relate to. And with images such as, “I defiantly wore my women’s-size clear plastic raincoat and go-go boots to grade school and cultivated my own isolation like a rare and beautiful flower,” it’s easy to both visualize and sympathize with little Alice.

As a fellow music geek who often relates more confidently to vinyl spinning on a platter than during any sort of job interview or larger party, Alice writes about music fandom engagingly, affectionately, and accurately: “Audiophilia in a teenage mind can take some odd turns. The more I listened to music and got to know musicians through their songs, interviews and articles in music magazines, the more I fell in love with them. And by love, I mean that crazy, obsessive infatuation that passes for love in young adulthood.” The picture of Alice in her specially-asked-for Elton John specs, jaunty scarf, and parted-in-the-middle, feathered hair cut is priceless. She looks so proud. It’s awesome.

Another dimension of the book I appreciate is the near-constant pragmatism that comes from being poor. I’m not talking “we all wore paper sacks as underpants and ate dirt” stuff, but the conscientious balance between having fun and working to cover one’s bills, of looking at community education when private’s too expensive. Of respecting other people’s property because you value what little you have. Alice displays this in some very subtle ways. Again, it involves Elton John: “There was only thing I could take without damaging Elton’s beautiful limo, so I ducked down and started unscrewing a tire valve cap… Once I’d loosened the cap, I clutched it tightly, as though it was a diamond ring and not a piece of hard black rubber.” She has a great way of twisting themes together in ways that are artistic, light handed, and vivid.

But the book is truly larger than just punk. It’s about family. Very little is obvious on the surface. It’s about complicated human nature. It’s about recognizing this in obscure ways: “Through this seemingly vapid sport of lucha libre, I learned to understand the concept of duality at an early age. It was the same kind of duality that I experienced when I realized I both loved and hated my father, that a rudo—a villain—could also be a good guy.” The main character of the autobiography, aside from Alice, is her father. Her father is a man who ruthlessly beat his wife, who dragged her through the streets by her hair, bloody. Her father is also a man who adored his daughter and promised her the moon, who loved her unconditionally. Alice is a better person than I. I’ve cut family ties and never again talked to someone blood-related for how they treated another family member. Although Alice never condoned her father’s treatment of her mother, she held on to him. Years later, when Alice is well out of the house and her father was too ill to work full time, she observed something unexpected. “It was strange to think that a man who had a history of wife-beating has such a positive reaction to the new, self-sufficient woman my mother had become. He began asking her opinion about work and household finances, and even went to the market with her just as a social thing.” To see that her father wasn’t a pure monster takes an unbelievable amount of courage.

At the end of the book, the reader is taken full circle, simultaneously lapping back to the beginning but with the residual—and again subtle—patina incurred from living an examined life. It’s set when Alice is a teacher in inner-city Los Angeles: “The trees in the kindergarten yard looked the same as before my father died. Only the leaves would change, some would die and fall off, but they’d always be replaced by new ones. Everything had changed in my world, and yet the world looked exactly the same.”

In the end, I have two teeny tiny question marks hovering next to Violence Girl. First, there’s no need for all of the chapters to be super-short, with most clocking in at three pages or less. Perhaps this is an effect from converting pixels to paper (Alice’s “Diary of a Bad Housewife” blog is dynamite), or fearing that most punk readers are 1-2-3-4-go!-ers and don’t have the attention span. I think certain topics and stories deserved a longer, un-chunked treatment. Secondly, the book ends like the end of a whip, covering a good lump of years in a quick snap. The editor in me suggests using all that extra white space taken up by the short chapters and adding twenty pages of content to get the full-to-now Alice story. But maybe that’s just me. Alice is interesting. I want to hear her whole story all the way through. Like, why’d she turn down a meal with Oprah?