I was very excited to see Bob Mould swing through town supporting his new album District Line on Anti. About two years ago, I saw Bob Mould play at the Troubadour supporting his Body of Song album. What I didn’t know was that I was going to see him doing a special solo acoustic show. Artists change over time and all that, and I know Bob Mould has gotten significantly mellower and even gone techno at points, but still the fact remains that he is one of the best things to ever work a big, loud electric guitar in front of a band. Knowing for sure that I was seeing Bob Mould and his band this time, I considered tonight my makeup date.

When I walked in, the opening band Saturna was playing. About all I can say about them is that they were nondescript indie rock. No really great hooks or energy, just lots of guitar effects and heavy/quiet guitar stuff going on. Bands like this are a dime a dozen in places like Silverlake where every serious “musician” who heard the Smashing Pumpkins when they were thirteen is probably in two or three bands that all sound like this. 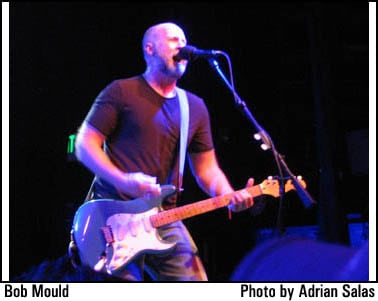 During the wait for Bob to come on stage, I was able to take in the odd mix of people who showed up. There were hipsters and indie dudes, yuppies, a few old punk rockers, record nerds, several buff gay dudes, a guy who looked to be at least in his mid-sixties in one of those sit-down walker things, and even a random crust kid with green mohawk. It was quite a mix and I wondered to myself just what in Bob Mould’s music affected such a large cross section of music, or, more specifically, what era of his music certain people were actually into.

As soon as the curtain lifted on the four-piece band (keyboard, bass, drums, and Mr. Mould on guitar), there was a nice wall of fast, energetic guitar. The night was peppered with songs from Mould’s solo albums, including his two latest. He also played several songs from his Sugar days. Luckily, there were a lot of songs off Copper Blue, since it’s the one Sugar album I have. These songs included “A Good Idea” and “Hoover Dam.” The band was great, with Bob and his bass player bouncing all over the stage when they weren’t tied to their mics. Bob had more energy onstage tonight than I’ve seen him have in old Hüsker Düvideos, and looked quite a bit healthier, to boot. 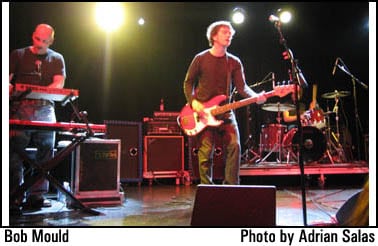 Now a lot of Bob’s solo (well, the stuff not bogged down in electronics) and Sugar stuff is good and even great alternative rock. The thing is that while he was in Hüsker Dü, the band released several of the greatest albums of all time; so, anything afterwards pales in comparison. It’s almost like comparing graham crackers and cookies; they’re both good, but one is just light years past what the other one can ever touch. Tonight kind of proved the point, because as enjoyable as stuff like “Circles” and his new single “The Silence Between Us” is, the second the band launched into “I Apologize” from Hüsker Dü’s Flip You Wig, everything up to this point seemed like foreplay. The crowd went from appreciative—if somewhat restrained—spectators to suddenly losing their shit and jumping around and singing at the top of their lungs.

The band went right into what I think might be one of the ten best songs ever: “Celebrated Summer.” At this point I saw something amazing happen, which was that a middle aged circle/pogo pit broke out. Now, there’ve been pits before with guys in their thirties and forties, but they’re usually made of the embittered muscle-head variety who are out to prove how punk they are to fifteen-year-olds. Instead, this was a crowd of Volvo-driving, KCRW-listening, Starbucks-drinking people who probably hadn’t been to a raucous show in fifteen years. It was really something to see how much these songs meant to people. The band finished off with “Divide and Conquer” before coming back for two encores including the Sugar song “If I Can’t Change Your Mind,” and the real topping on the cake, two Hüsker Dü songs: “Chartered Trips” and “Makes No Sense at All.” After he completely unleashed the excited/heart broken/angry/optimistic seventeen- year-old punk in nearly everyone in the room, Bob politely said, “thanks,” and left the stage.