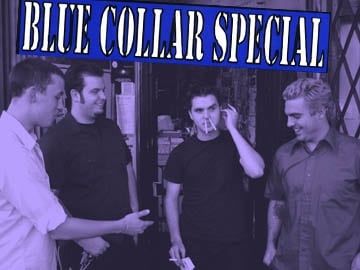 I didn't know what to expect from Blue Collar Special. I thought they must be an oi band, with a name like that. I threw the CD into the stereo of my car and headed west down Sunset Blvd. towards Fairfax. What I heard emanate from the stereo was power chords with catchy hooks. This was pop punk or melodicore as people have called it. Yet, strangely enough, it didn't suck.

Blue Collar Special has that perfect duality. They aren't too poppy and bubble-gummy like, say Blink 182, yet they are poppy. They aren't too hard and silly like so many hardcore bands, but they're still hard. They get you to pump your fist and love punk rock all over again. When the disc got to song number five, I realized that this was the kind of punk rock that first got me into the genre. This was fun and pure rock music.

When I got to the parking lot of the bar, I had one more song left to go on the disc. I stayed in the car listening to the last song, not caring that it was approaching last call. I needed to hear the rest of this ten-song disc. While listening to the last song, I checked out all the goodies that came with the CD, including a sticker for the band. On the back of the sticker are scrawled the words of Duane Peters of the US Bombs: "(Blue Collar Special) restores my faith in punk rock!" These words sum up pretty much what anyone has had to say about Blue Collar Special. Almost every review I have read says something to the effect of "I don't normally like music like this, but this is good. This is what it is all about." I am no different. I share Mr. Peters's opinion of this band.

I've met Rafe Mordente, guitarist and one of the singers of Blue Collar Special, a few times and what I can say about him is that he is a nice guy, usually with a smile on his face, a hearty laugh, and a firm handshake. He seems like the type of guy who really is "happy to meetcha." This all came through on the phone when I talked to him one afternoon. What also came through was the fact that Rafe had consumed a lot of coffee, and we discussed how low grade legal speed is just plain wonderfulness. 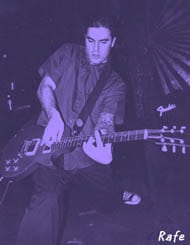 Rafe plays guitar and sings in the band, but he also presides as the big poppa of Blue Collar Special. Not only is he the oldest in the band at the age of 29, but he organizes the show schedule, books the shows, and does the finances. "I'm the old guy in the band," Rafe said. "I'm probably the most responsible in the band, but they're more responsible in life. We're all on the same page, though. It is truly a mental thing."

Besides being the baby's daddy of Blue Collar Special, used to operate the Hollywood record store Destroy All Music (they're still a family), as well as the Destroy All record label. He is also one of the publishers and the president of the free Los Angeles preview magazine Destroy All Monthly (he handles the accounting, invoicing, purchase orders, and pays the bills). Obviously Rafe is a man who likes to keep a lot of things on his plate. He also is a man who has a favorite food included on all the plates, and that favorite food is Blue Collar Special. Blue Collar Special's releases are on Rafe's record label and are sold through his store; the shows are publicized through the magazine. Some might call this blatant self-promotion and stick their noses in the air. "Fuck them," Rafe said. "That's why I'm doing it. The reason I got the store was so I would have a place to put out our records. The reason I got the magazine was to let people know about our shows. I mean I sat back one day and realized that what I would really like to do is play music. I think a lot of people are just jealous. I'm doing it DIY. You know a lot of bands preach a DIY lifestyle, but how many of them really do it? Most just do it until they get signed because they're just waiting to be signed. As far as me using the magazine, I haven't put our band on the cover yet. When I want to play with a band, I don't put them on the cover. I do business, but I don't do bribes... Hard work and longevity is all I know."

Blue Collar Special got their name from a North Hollywood Pizza place called Joe Peeps NY Pizza (located on Magnolia and Whittset Ave.). The pizza place boasts a cheap pizza dish that is the band's namesake. "We used to come over the hill (from the San Fernando Valley) and try to get laid (in Los Angeles) and you got people from like Kansas bumming on me and saying, 'Ew, 818', and they're from fucking Kansas," Rafe explained. "I just live over the hill from here. It's like not even a ten minute drive but they're throwing attitude and they're not even from here. I just live North from Hollywood. Don't treat me like a fucking leper." 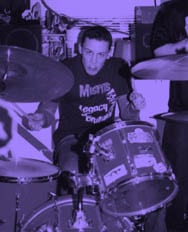 Blue Collar Special has that Clash sound at times. The frontman role changes among three people in the band. Sure enough, Rafe's favorite frontman is Joe Strummer. "When I was about thirteen or fourteen," Rafe said, "I used to listen to the Clash. I didn't even know they were punk. I was like really into reggae. My mom was cool and would let me go to all these Reggae Sunsplashes at the Greek Theater. Some guy gave me a Bad Brains record to listen to and I went nuts. A year and a half later I was into Social Distortion and shit. I grew up on a skateboard, so anything really aggressive like Agent Orange or Bad Religion (was good). I even listened to NWA and rap like every suburban white kid. Anything that involved aggressive fuck off kind of rebellious music. Punk rock was the music of a fuck up, and that's what I was. I went to like four high schools and when I was eighteen or nineteen, I was all about punk rock. Later on I worked at Destroy All Music and the guy who owned the place back then, Charles Arjavac, educated me and played me the New York Dolls and stuff. The music was an aggressive release. People wouldn't kill each other; they'd just get in the pit and slam and shit."

The name Blue Collar Special can sometimes cause a bit of a problem. Many perceive them as being an oi band because of their name. "People expect us to be like a skinhead band," Rafe said. "Imagine that. I'm a Jew in a white power band. Once, Guttermouth's people called before playing a gig with us and asked if we were a white power band. I thought it was funny. There's a lot of white power people in Orange County, but not as much as people think. It definitely throws you off, though, when you see it. I mean if you or I were to have swastikas and those tattoos here (in Hollywood), we'd be dead."

Getting away from white power and fascism and on to punk rock trivia: what do Blue Collar Special, Martin Scorsese, Penelope Spheeris, Flea, and the Ramones have in common? They all worked with legendary B-movie producer Roger Corman (Rock n' Roll High School, Suburbia, The Tomb of Lugia). "We're going to be in a movie," Rafe said. "It's a Roger Corman film, so we were all hoping to meet him because he was responsible for Rock n' Roll High School, but we never saw him. The movie is called Prime Evil and it has this oversized crocodile." This movie is obviously destined to be a classic. Blue Collar Special is in it, so even if a Roger Corman movie with an oversized crocodile sounds bad, it must be good. 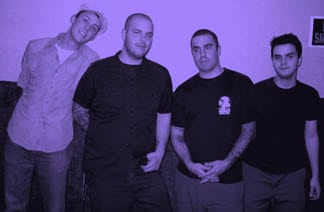 Notoriety somewhat follows this band because of a song they recorded. The song "Dean Dogg" features the chorus "Fuck the security at the Roxy (a Hollywood club). We would play there again." Rafe admitted, "I doubt they would have us, but we would play there again. If anything, I would like to play there just to play that song. One night when Youth Brigade played, everyone was on the stage having a good time. This bouncer started throwing people off, even though the band was fully inviting people on stage with them. When he grabbed our friend, our friend got the bouncer in a headlock and ripped his beanie off. The crowd absolutely loved this. Our friend got dragged outside. We all stayed in the club thinking that he had just been ejected from the place, but what was actually happening was that three bouncers were taking turns beating him up and spraying mace in his face. That's just not cool."

Steering away from the unfortunate story, Rafe and I started discussing about how it was to be the older guy at the punk show, when those seven liberty spikes start to recede and dwindle into six or five and you start getting too old to run around in a circle all night. "(We prefer) all ages shows," Rafe said. "It's all about the kiddies. I spend my time off the stage at the bar now in the back. Once we were playing a show and I started poking fun at the audience, saying that their pit wasn't very punk rock and wasn't that hardcore. They dared me to get in the pit and so I asked the guys if they could perform the next song without me. They said, 'Sure.' So I jumped into the pit and slamdanced for a song that was less than a minute long. I got back on the stage and I was out of breath after a song that was about forty-five seconds long. The band was about to break into the next song, and I told them to hold up. I needed a breather after forty-five seconds of running. I need to start eating vegetables now, man."

Rafe knows the true essence of punk rock. "(When I see a kid) buy my record or tell me he likes my band, it's worthwhile," he stated. "For me, it's like I made it. I'm done. That's all it takes, one kid."