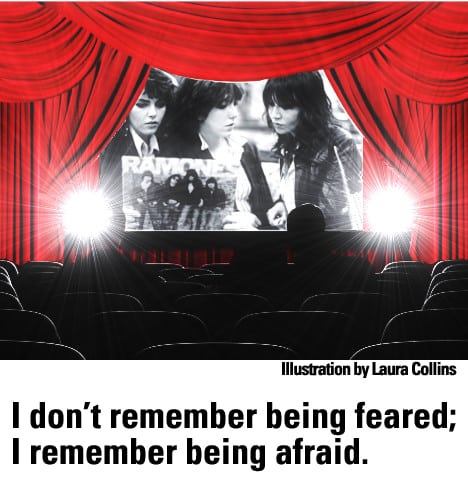 Bloodied But Unbowed: A Film Review: And Yet So Much More

It’s a good night to get gum stuck to my shoes. I’m glad to find another pocketful of Mecca in seedy paradise, running up the theater’s velvet steps with my movie date who, I’m happy to see, is almost as excited as I am.

This theater used to be called the Garneau. New ownership brought the name Metro because businesses, like money, are fluid. Nobody cares who owns what so long as the theaters keep playing the things they want to see.

I obviously don’t care too much either, because here I am, ticket in hand.

We have our choice of seats. There’s hardly anyone here and I’m embarrassed for the premiere. Don’t people care? Shouldn’t they?

A man comes on stage and tells us facts about the documentary we’re about to see—facts I should by all rights care about, but they aren’t rattling the better parts of my brain. I already know what I’m about to see: Vancouver, B.C. through a punk retrospective. I’m only interested in the footage and the feeling behind it, even though I know all I’m gonna take from this night is: “It was good; I liked it.”

How can people learn from my opinions when opinions are entirely subjective?

I figure I’m about to discover a bunch of washed-up heroes I’d have been sure to fall in love with if I’d only known about them sooner.

Did we Canadians bring anything to punk (aside from D.O.A., I mean)?

I guess I’m about to find out.

The film opens with Joey Shithead (of D.O.A.) in StanleyPark (that’s in Vancouver, Amerikids). It’s 1970-something and he’s complaining mostly about disco.

Enter the name drops. All these buzz-cut figureheads appear on the screen—faces I know and love to see. This must be how “normal” people feel when they catch glimpses of celebrities.

We’ve got nearly all the bases covered, from Black Flag to The Avengers and the Dead Kennedys. Nearly every band member expresses the same sentiment: Vancouver was one of the best leading punk scenes.

The narrator sets the scene of the crime, describing late-seventies Vancouver as “a city of no fun, no support... no escape,” the West’s barren wasteland.

I wasn’t there, so I have to believe him.

Every interviewee sticks their guts on the lens whether by way of raw humor, footage, or emotion. I appreciate their honesty—especially when it comes to sharing their suffering, because I don’t remember being feared; I remember being afraid. When you’re the only kid in a school of three hundred who’s sticking safety pins through their pants (and elsewhere), you learn very quickly it’s dangerous to stand out.

Ginger Coyote (editor of Punk Globe magazine) talks about how she was arrested for the color of her hair and remembers kids being beaten with baseball bats “for choosing to be different.” I can’t relate to the violence, but I understand the prejudice.

We all need an escape, whether it’s from our peers, our homes, or our heads.

It seems nearly all punks started as freaks n’ geeks. At least, the members of The Subhumans and D.O.A. certainly did—the  doc’s got school photos to prove it. In fact, the film’s mostly a D.O.A. documentary with guest spots from The Subhumans, The Modernettes, The Pointed Sticks, and Art Bergmann (of the K-Tels).

The chapters are strangely themed, which (to me) only enhances the doc’s legitimacy. Rather than picking apart the scene band-by-band, as many documentaries are wont to do, they attack it through concepts. Segments like “On the Road,” “Guys with Jobs,” and “Punk Romance” make for disjointed frog-leaps in the narrative. I like it. The only downside is the film might have spread itself a bit thin, sacrificing detail for coverage.

There’s something about an oral history. It’s real, confounded, and easily mislead. Then again, you could say the same for all that’s written.

I love watching these icons talking about when they were kids, when they were my age; I love hearing about The Damned and The Sex Pistols changing lives. You didn’t have to be at the Saint Martins gig to be inspired, that’s for sure. As soon as those records found their way across the Atlantic, souls awoke.

Though the documentary may be unkempt, it leaves no door unopened. Other filmmakers would undoubtedly shirk at the mention of sexism in the punk scene, but these guys dive right in. We’re shown footage of The Dishrags onstage (immortalized as being the first all-girl punk band to pop up in Vancouver) prepping for their next number and being regaled with gems from the audience like, “Talk dirty to us” and “I promise I won’t cum in your mouth...” I wonder if any guy, gay or otherwise, has gotten that much sexually loaded grief onstage. Was gender-centric prejudice that prevalent, even as the punks befriended the LGBT crowd?  If all orientations were accepted (as a rule), then why did the possession of a vagina remain a stumbling block? I suppose that’s an issue for another essay.

There are so many stories lost in the shuffle, whether in my scattered mind or within the folds of history. It all flashes quickly across the screen: the camaraderie, main venues of the scene (The Smiling Buddha, The Plaza, etc.), vomit stories (crucial to any punk doc), sex, bristling politics or utter lack thereof, and the peak where the wave pulled back. It’s that elusive turn in the narrative and oral history—that devastating break everyone felt but couldn’t quite articulate, though the year or date is constantly debated (some say ‘81, others ‘83-’84,  and the die-hards argue as early as ‘74). Bloodied But Unbowed marks the turning point down to not only a year, but a specific event: D.O.A.’s Hardcore ‘81 tour. Like it or hate it, hardcore changed everything.

The film pays homage to the gunslingers lost in battle, but I figure it’s worse to be one left behind. How do you stay dry after you’ve been drenched? Then again, if all of our soldiers were lost, there’d be no one to interview.

I’m moved by the humility of people who should have been legends. Bergmann is particularly endearing, a thin pain veiled beneath his sobriety. Many assert his muse was rooted in alcohol and drugs, and he confides to the camera: “Now I’m clean and I don’t write anymore.” Does giving up on destruction mean saying good-bye to your art? Jesus, I hope not.

Suddenly, I’m alone. The screen continues to flicker, my date still sits beside me, and the rest of the movie-goers present (few though there may be) munch their popcorn and mumble at appropriate intervals, yet I’ve come to realize that in the gig of life, you play solo.

Why should a movie make me feel that?

Bergmann’s right about history not being told by the losers, but it should be. The misfits and the underdogs are the ones who should be making these movies, and Bloodied But Unbowed is proof that some do.

Feelings shouldn’t just be felt. They should be written down and disseminated. That’s the only way they’ll brace themselves against the erosion of time.

Reviews are what make something useful out of memories.

I walk out with my movie date, clinging at his hand like the pitiful lovesick pup I am. He doesn’t ask me what I thought of the flick but I tell him anyway: