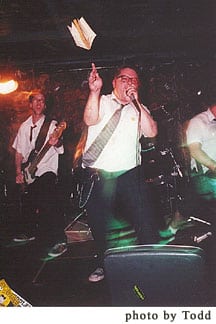 Bloodhag: An Unauthorized Biography: Introduction and interview with Beth By Todd Taylor

When I did the Bloodhag interview that was already on this site, I'd poked around and tried to turn up some more information on the guys. I did this by sending a bunch of interview-like questions. It rarely pans out. Out of the blue, a friend of theirs furnished me with a wealth of information. Too good to pass up on, thanks to Beth, here's an unofficial biography of Bloodhag's history (with a little gossip thrown in) from her point of view.

She used their band names/personas. They are as follows:

"I remember the first time I heard the boys were forming a band. Jake came home all excited (we were going out at the time)... "we're starting a band called Bloodhag and we're gonna play really short heavy metal songs about science fiction authors." I didn't really think they were gonna pull it off - especially since their first drummer - Philthy "Drum Machine" Taylor-was, well a drum machine. Their first show was a house party at my house and I couldn't even watch them 'cause I was so nervous for them and I'd never seen Jake be the front man of a band. It was pretty weird. I remember hanging out in Jeff's room one night with Jake and they played me the very first version of "Michael Moorcock." Jake is a great artist and he made up all these Bloodhag stickers and started putting them up all over the place before they ever even had the band together.

"I used to shuttle the boys around in my brown station wagon when they had shows 'cause none of them had transportation. I guess I was the Bloodhag Den Mother. Once I let them borrow the car to play a show in Vancouver with The Muscle Bitches and they got stopped at the border on the way back into the U.S. I guess Jake had some minute remnants of weed left in his backpack and the dogs smelled it(?) so they ended up getting searched and felt up by the border patrol! At the time Jake, Zach and I owned a collectibles store together and they were supposed to be back early in the day to work and I was PISSED OFF because they were so late. They called me from the border and I bitched them out - not knowing that they'd just been violated. When they finally got home they all looked pale as ghosts and pretty uncomfortable. After that I was too scared to ever take that car over the border again.

"I've probably seen more Bloodhag shows than anybody else and I've watched them grow from a bordering-on-a-joke band to one of the tightest, heaviest and most fun bands in Seattle. In the old days it was difficult for them to be taken seriously, especially by local booking agents. One snooty booker, in particular, booked all-ages shows and she wouldn't give them the time of day four years ago. Today she kisses their asses. Other bookers said they wouldn't touch a metal band with a ten-foot pole, but now that it's "in" they've changed their tunes quite a bit. It's pretty funny/sick to see the music scene machine in action. Besides the fact that they just plain rock, Bloodhag is a smart band. The members all truly read Sci-Fi (and other types) books and have actually influenced people to read more books. I have overheard a lot of people at their shows say that they actually read the books that Jake throws at them. I never used to appreciate Sci-Fi until Bloodhag showed me the way. They have also influenced me enough that I started my own band. Every member of Bloodhag has helped me out. Jake gave me my first guitar. Zach taught me the basics of guitar playing. Jeff taught me my first power chords and Brent taught me the 12 bar blues, among other things. In short, Bloodhag - the band and it's members - are an integral part of my life. -Beth

The interview that I sent through e-mail is as follows: 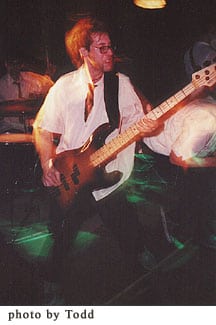 Beth: Everyone knows that chicks dig librarians, right? (Yeah, right). Well, I'm convinced that the sole reason these nerds started educore was because the heavy, black-rimmed glasses and pocket protectors just weren't cuttin' it with the ladies. I believe there is a direct correlation between Bloodhag's arrival on the music scene and the upsurge in "the nerd look." How many hipsters were sportin' this look four years ago? The answer is: 3 - the original members of Bloodhag. This, I believe, was a systematic plot by the boys to get into the pants of all those chicks who once shunned them... and it worked! Professor J.B. Stratton (Grimoire The Expectorator) has made the most use of this ploy. No longer satisfied with "teaching" the young nerdesses in his college classroom, Professor Stratton decided to start a band (making himself the lead singer, of course) so that he might "get lucky" more often. His favorite line is "Would you like to see my Hugo Award sometime?" I've always thought his work was predictable - and I'm not just saying that because he dumped me for that bitch, Ursula LeGuin.

Todd: Is the Hag secretly working on their own religion?

Beth: On their last tour, Bloodhag made attempts to infiltrate Scientology Headquarters but they were briskly removed from the grounds by Security. I gather that they were trying to learn more about how to start a religion of their very own. I don't think they have enough money, though. If they were successful at starting a religion I would guess it would be something like The Church of The Subgenious meets Anarchic Syndicalism.

Todd: Were they ever in Rush or Journey cover bands?

Beth: No, but they've been known to attempt some Gary Numan songs.

Todd: Do any of them secretly lust after Judy Collins?

Beth: Nah, her tits aren't big enough. But they have a collective crush on James Tiptree, Jr. (a lady, for you non-Sci-Fi'ers)

Todd: Literary pedigrees? Who do they wish to be a direct descendant of?

Beth: I've heard rumors that the original three members of Bloodhag were direct descendants of the late Phillip K. Dick-triplets, separated at birth and dispersed around the world to spread the gospel of educore. Their little brother, Ambassador B. Carpenter (Codex 23 The Chronomaster)was supposedly born to a different mother and it took several years to locate and de-program him. Now this is all hearsay, of course. Personally, I think all four of them are just nerdy sci-fi geeks with librarians for parents and delusions of grandeur... and I'm not just saying that because Logos dumped me for that bitch, Joanna Russ.

Todd: Do any of them wear superhero underwear?

Beth: Don't tell anyone I told you this but they all have matching days of the week underpants with a different Sci-Fi author on the crotch for every day of the month! Sometimes you can catch a glimpse when Professor Stratton rips his pants during a performance (which happens quite frequently).

Todd: Have they ever conscientiously ripped off another band?

Beth: Why do you think they call Dr. McNulty The Plagiarazor?

Todd: Have they ever tried to tour in a bookmobile?

Beth: I don't think their bloated egos could fit in a bookmobile, but that idea was thrown around a few years back. There was also talk of shooting a video at The Port Angeles Public Library, of which Professor Stratton's "Father" is head librarian. I think the theme was going to be something reminiscent of "Hot For Teacher" by Van Halen. I'd also like to add that the boys are playing in libraries on a regular basis now and are hoping to spread the word of edu-core on a national library tour.