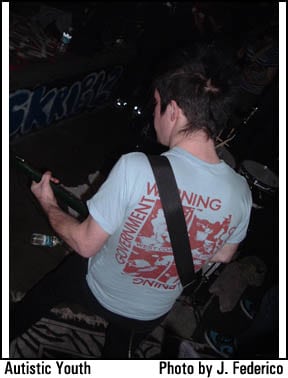 I sometimes feel a bit over-the-hill when I go to shows at Gilman (http://www.924gilman.org/), but what can I do? It’s not like I’m going to skip seeing a good band play just ‘cause I’m at least fifteen years older than most of the people there, right? Right! I suppose it kinda goes without saying. So I go, I watch all the kids running around, I wonder if Gilman / shows / music is as big of a deal to them as shows and music were to me when I was their age, and I hope it is, ‘cause it’s just so damn good.

I had to stick around the East Bay after work for the show because it was Abi Yoyos’  http://www.myspace.com/abiyoyoslast performance and I think they’re a great band, one of the more interesting local punk acts around. I think their EP This World Is Not My Home is really worth picking up; it has some great songs. First up, though, was Black Rainbow. Unfortunately, I missed them, as I didn’t get to Gilman until around 8:30pm or thereabouts. However, if they were picked specifically to play this show, I’d say it would be worthwhile to check them out. I plan to do so myself.

So the first band I actually saw play was Autistic Youth http://www.myspace.com/autisticyouth
from Oregon. They eschewed the formality of the stage and played down on the floor. I liked them. Solid punk that at times reminded me of the Regulations. Snotty vocals. Brought some new life into standard rhythms by switching things up a bit. Got the crowd into a respectable pit for a couple minutes, which was fun. They should have a record out, LandmineBeach, in January on Taken By Surprise Records. How can you go wrong with a label named after a Poison Idea song? I’ll be keeping my eyes on these lads to see what they come up with in the future and would go see them again the next time they come through. 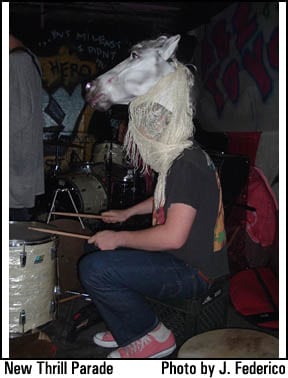 The next band was the New Thrill Parade newthrillparade.com / sabinaholber.net. Before they played, I was looking over their merchandise and saw this gorgeous record they have that has a 3-D cover. Nice! The band itself was pretty interesting. First of all, costumes. The bassist was wearing a big mask that actually frightened me a little; reminded me of Waldorf from the Muppets balcony, only scary. They have two drummers - one behind a set and one guy on the floor banging on some cymbals and stuff. He was rockin’ a giant horse head mask thing and a small flashlight beamed through one of the nostrils. Curious! They also had a guitarist, singer, and woman who played saxophone, keyboards, and what I believe was a kazoo. Sound-wise, I guess you’d put them in the art punk camp. They reminded me of Firewater a little, and had split personality vocals ranging from Nick-Cave-style deepness to higher screaming outbursts. The music was equally as varied - at one point the saxophone dragged the parade down a little, in a style not unlike the street band from the Nightmare before Christmas, until the drums came in and turned the whole affair into a boisterous bohemian festival. Entertaining and kinda fun, but I don’t know how much I’d listen to them at home.

On an aside - apparently Gilman recently had some kind of art show. I was looking around when I arrived and it seemed like the graffiti was a lot better than usual. After the show I poked around and found some pictures of it here: http://mediadissent.com/paulsBlog/?p=34. It happened back in November and was touted as a one-night-only wheat paste, stencil, and mural show to celebrate “the layers and layers of art on these walls that has been painted, pasted, and ultimately covered by new work over the years.” It was called the Wall to Wall art show.

After New Thrill Parade I began wondering how I was going to get home. This is, I have decided since moving to the Bay area, an unnecessary aggravation. Why doesn’t BART run all night? I just don’t understand it!! At least on the weekends….. even the metro in DC (for heaven’s sake) runs later than BART. What’s the deal with that? So I started checking the time and thinking about my options. The Bananas were still to play before Abi Yoyos and it was getting late. Last train at 12:26am. I could take the transbay bus but I didn’t know where the pick up was near Gilman. Poor planning. My friend suggested I stay at his place in the EastBay but I had a lot to do the next day and wanted to wake up and start the day from my home base. 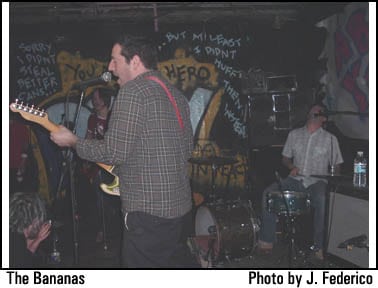 The Bananashttp://www.nokilli.com/bananas/home.html and http://www.myspace.com/thebananasfrom Sacramento came on around 11pm or so. I find them to play an extremely likable and fun style of punk and it seemed that the crowd agreed. There were a lot of smashed-up people in front of the stage and some dancing further back. The guitarist belted out some tunes and the bassist and drummer shared back-up responsibilities.

Here’s where things are going to diverge a little.

After a few songs by the ‘Nanas, a new friend of mine showed up unexpectedly and caught my attention. His presence, although intending to be a pleasant surprise, actually distressed me, due to how I thought it might affect the person I went to the show with.

Also, as I write this, I feel like it kinda sounds like some teenage shit (no offense, teens!), and it’s a little ridiculous. Maybe the average age of folks at the show and the aged feeling on my end seeped through a bit more than I previously realized.

What I mean is, his arrival caused me to feel uncomfortable and a little anxious. Those feelings, combined with the ticking clock of the BART schedule, made me to want to leave. I’m not one of those people who think I have to stay ‘til the very last note of a show no matter what. I wouldn’t say it’s a regular occurrence, but there have been times where I’ve cut out of a show early because I’m tired or distracted or I’m just done for the night. Even though I’ve seen them a few times before, on this night, the last Abi Yoyos show, it didn’t make a lot of sense that I wouldn’t stay through ‘til the end, but that’s what ended up happening. Somewhere towards the end of the Bananas’ set, I left. 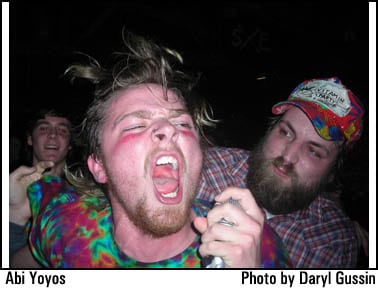 Later I asked the friend I’d gone to the show with how they were, and he said this: “They were good, I liked them, the crowd was excited, there seemed to be a lot of people on stage at once.”
And there you have it.