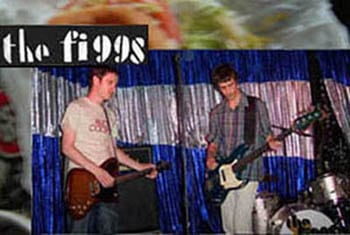 Basement Parties in Wisconsin: An Interview with the Figgs

About eight years ago, Todd Cong and his girlfriend ran a record store/thrift clothing store in San Pedro called the Recess Play Pen. Unfortunately, the store failed. One good thing to come from the whole endeavor, though, was that I got a pile of cheap CDs from the merch fall-out. The best of the bunch, by far, was The Figgs' album Low-Fi at Society High. I knew nothing about the band previously but was blown away by their super-quick and tight Elvis Costello-ish two- and three-minute power pop songs. I put the CD onto a tape with Tommy Stinson's first solo album on the other side, and played that thing over and over and over and over again in my car stereo. Along with other standard-setting albums by Husker Du, the Replacements, the Pixies, the Jesus and Mary Chain, the Rolling Stones and the Meat Puppets, that record is permanently etched into my brain. But like all other truly gifted artists, The Figgs quickly abandoned an easy, established formula and challenged themselves with new styles over their next few releases. Each of these albums threw me at first but quickly earned a place in my heart. One thing that has never changed over the years that I've seen them, however, is their awesome show. These guys play like they've been doing it since wearing diapers, and like they've been friends for equally as long. It's cool to see.

Interview and pictures by Jed Schipper

Jed: First off, thanks for doing the interview. As you know, I'm a big fan. For those who aren't, please start with basics like how long you've been together, where you are from and what style of music you play.
Mike Gent: We've been a band for seventeen years. Started in Saratoga Springs NY in 1987. We play rock and roll music.
Jed: I remember reading somewhere that you guys had been more of a bar band before taking up your more rocking, alternative style of music. That would make sense to me, kind of like how they say John Doe played in bar bands before punk, which gave X an edge over the rest of the mediocre punk bands. Was a bar band history the case with the Figgs?
Mike: The first shows we played were high school functions. Then we started putting on these all ages shows at a local bar called The Bijou. After that, we got a weekly gig at a bar called Our Place Pub. We had to play three sets a night and really started learning how to be a band. We did that for about a year. Around '89, we got our first show at a real club in Albany, NY called the Qe2. There, we learned how to put together a nice one-hour set.
Jed: Low-Fi was my first record of yours. By no means am I loyal to just that record, but it is unique in that it has twin guitars and more of a commercial sound. Was it Greg Lyons who made it like that? I see you mentioned him as inspiration but not a playing member on one of your later albums.
Mike Gent: First off, his name is Guy Lyons. He was our first drummer, left the band in '89, and returned on guitar at the end of '92. He has and will continue to inspire the band with his spirituality. He still joins us onstage now and then.
Jed: Also regarding the Low-Fi album, at your last L.A. show I picked up Ready, Steady, Stoned, which is basically the demos for Low-Fi. Not only is the recording quality weaker, but the orchestration and execution of the songs is weaker. It seems like something led to a drastic improvement in your playing.
Mike Gent: Ready, Steady, Stoned is a real record, not demos! When we signed with Imago they thought we should record some of the stuff that was on Ginger and RSS. The recording quality on RSS is not weak! Just different. RSS took two days to record, Low-Fi took two months. RSS was done on 1/4 inch eight track, Low-Fi was recorded on two inch twenty four track. Low-Fi was done one year after RSS and we had come a long way with learning how to write and arrange songs. Ready, Steady, Stoned is still my favorite Figgs record.
Jed: I think each of you three in the band are great musicians. I hate to single any one of you out because I think all three of you contribute in brilliant, subtle ways. However, one of the things that first grabbed my attention and still does is Pete Donnelly's insane, all-over-the-place, fluid and just plain great bass playing. How did he learn to play like that?
Mike Gent: I know that Geezer Butler was and is one of Pete's main influences.
Jed: I often try to describe The Figgs to people and don't know exactly how to. I'll say "power pop" similar to early Elvis Costello, but that is based off of Low-Fi, which is just one album. I've also said like the Beatles, the Rolling Stones, the Jam, the Replacements, Alex Chilton. Other times, I just say that you are like cool punk kids who understand smart rock and roll more than any other band. Who do you see yourselves as being like?
Mike Gent: We love all of the bands you mention. I like the roll just as much as the rock. I think what sets us apart from a lot of bands from the '90s and now is that we use 7th chords and have more than one lead singer. 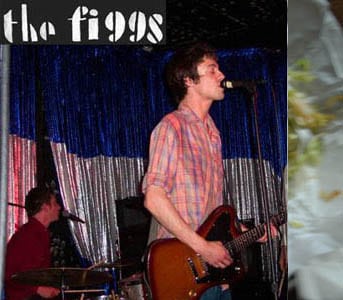 Jed: One thing I've noticed in your songs is that you have a huge catalogue of songs and not one of them seems to touch on political or even remotely social issues. They all seem to be about people you know, social situations, or about your cat. Even the Clash song you recorded with Tommy Stinson was "Hateful," which is one of their few non-social songs. Do you, like Blag from theDwarves, not think social commentary belongs in music?
Mike Gent: We care about the world. I would feel silly singing about social issues. Besides the Clash and the Fugs, there are few bands who do it well. Most of the time it comes off as being silly or boring. When I listen to a record or see a band, I want to be entertained, not preached to. Unless it's Al Green.
Jed: A friend of mine is a fan of the Fugs. He wondered if you knew that you were borrowing the Fugs title with your Couldn't Get High album.
Mike Gent: Tell your friend to piss off.
Jed: That same friend also said that his band was playing at a punk-house basement show in Milwaukee a couple years ago and saw your name listed on the calendar with a bunch of exclamation points. He remembered your name from my talking about you all the time, but also remembered that he had seen your "Favorite Shirt" video on MTV. Was that the same Figgs, you guys, that played in that punk basement? How do dirt-bag punk kids take to a Figgs show?
Mike Gent: Not all punks are dirt bags. For some reason, kids like us in Wisconsin. They know all of the songs and we enjoy playing basement parties, but only in Wisconsin...
Jed: How was the MTV experience?
Mike Gent: It was actually fun to make and fun to watch on TV. I think they showed it twice!
Jed: Lastly, I mentioned Tommy Stinson a couple times in this interview. I now know that you guys are pals. I'm a freakish Tommy Stinson fan, too. How did your friendship come about?
Mike Gent: He came to our first show in LA in '94 on the Low-Fi tour. His girlfriend at the time got him into us. After that, around '96, a mutual friend gave him my phone number. We've been pals ever since. We will be touring together starting in August through the rest of the year. It's a blast playing music with him. The Replacements are the best band from the '80s hands down.