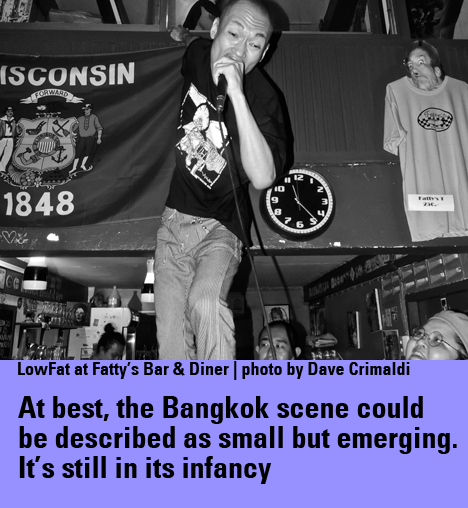 Bangkok Scene Report by Dave Crimaldi: Underground music thriving in the Land of a Thousand Smiles

Thailand has been making news for all the wrong things, but I feel safer here than both my native northern New Jersey and Philadelphia where I attended college. While it’s a developing nation that attracts the kind of weirdos that could fill a million Mos Eisley space cantinas, there’s also a small yet inspiring underground music community catering to all ears.

Bangkok is a very modern city, complete with excellent public transportation that includes a few free buses, delicious yet cheap street food, and rent for even the poorest of freelance writers. It’s definitely artist-friendly and if you could live like a local person and learn to cook your own food, eat street food, use only buses, and avoid the temptation of expensive restaurants and pubs, then it’s very easy to live on less than $1000 a month—­even half of that is possible if you don't drink or smoke. Obviously, this would be impossible in any western country. I’m living on a few dollars a day. It's not fun, but it's possible.

For the last eighteen months, I've been going to shows like a fiend. Many of my observations have come from hanging out at two places in particular: Fatty's Bar & Diner and Harmonica. Fatty's is still going strong, but Harmonica has closed in recent months. The music you'd find at these venues is all over the map, with everything from folk to grindcore. Multi-genre shows are happening with more frequency, possibly due to the fact that since the city is small the bands are friends and often share members. Some of the musicians are doing a few shows a night with different bands in different venues.

All my friends play in bands which perform regularly so this is by no means a definitive or comprehensive guide to the Bangkok underground. There are very distinct metal and punk communities in which I am but a passing observer. The good news is two of my bros are researching music in Thailand. Pablo Ramirez is writing his Ph.D. thesis on the Bangkok underground and is far more familiar with the punk and hardcore scene than I am. Music and film critic for the Austin Chronicle, Marc Savlov, is researching a book on punk rock in Thailand. Pablo's thesis should be finished soon. Marc's book will take more time, though.

One more note to make before jumping into the music: there’s no discussion about politics in this piece, although I do think it's an important part of any understanding of the music in the city. It's beyond the scope of a simple scene report, but I believe my colleagues Savlov and Ramirez will cover it better in their own research.

It's easiest to just start reporting on venues.

Immortal - The first time I stepped into Immortal Bar, I nearly lost my beer. A hardcore band was playing and there were Thai kids windmilling, dropkicking invisible enemies, and making this bespectacled, middle-aged philosopher shrink into the corner. Immortal is a place for punk and metal to coexist in peace without asking the existential questions of whether or not one is a punk or metalhead. It's run by Fah from the Southeast Asian metal band, Carnivola—they remind me of Sepultura from Brazil. Anyway, I don't hang out there very much but my friends in the hardcore bands TSOS and LowFat promote shows there quite frequently. It's a natural place for punk and metal bands passing through to play at. The beer is cheap and a lot of people are buying their beer at convenience stores outside—that's not great for the bar, but it makes it a cheap place to hang out with your friends if you’re broke, unemployed, and living with your parents. 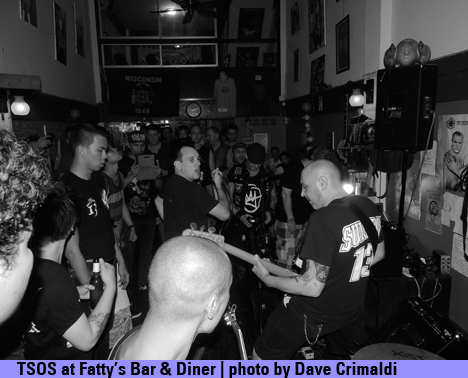 
Fatty's Bar & Diner - Fatty's was founded in the latter half of 2012 by my friends, Matthew and Kae, as a place for greasy American food, cheap beer, and live music. In the very beginning, it was suffering the fate of many a failing bar. There would be an old geezer past his due date playing cover songs in an otherwise empty room. Luckily, this format soon changed. In May of 2013, there was a Fatty Festival celebrating the one year anniversary of the diner. About a dozen bands ranging from folk, blues, garage rock, and prog-punk packed the room. There were more people standing around outside than there were inside. That was the game changer and now Fatty's plays host to all sorts of underground music including metal, punk, garage rock, indie rock, and folk. As long as it's original, it's generally acceptable. 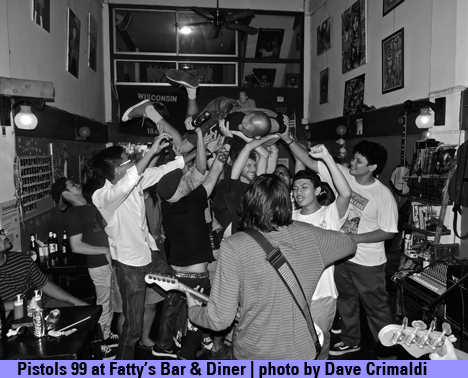 Unlike many other venues, Fatty's doesn't charge bands to play original music. They have their own PA and drum set which makes it easy to put on shows without moving heavy gear in cars and taxis in a city with ridiculous traffic. Fatty's, founded by a songwriter from Wisconsin, is home to many of the city's expatriate bands who feel cozy in a dive. Also, a certain philosopher occasionally crashes on the sofa for days at a time. My favorite shows to see at Fatty's would definitely be the hardcore punk and metal shows with Degaruda, LowFat, or TSOS. The shows are musically apolitical so it's normal to see a hardcore punk band playing side by side with a country Americana band like the unofficial house band, Matthew And The Fishes.


Harmonica - This is basically a eulogy for Harmonica as it's now closed; however, it was an important venue for many local independent bands and musicians. Put “Wednesday” Suksriwan was the owner and manager of this small indie rock staple for three years before closing its doors in July of 2013. Because Put was an active musician playing in several local bands including personal favorites Plastic Section and Basement Tape, Harmonica always breathed the spirit of independent music for me. While there were weekly shows, they weren't always well-attended despite some great music. Admission for local acts was normally about 100 to 150 baht which would be three to five bucks in U.S. dollars. Deerhoof played there when they came to Bangkok and it was the lair to quite a few Bangkok bands, including the Thai/Japanese post rock band Aire. It wasn't a very big venue—maybe a capacity of one hundred people maximum—but it's the intimacy of those shows that you always remember and the multicolored lights created a surreal and celestial environment. 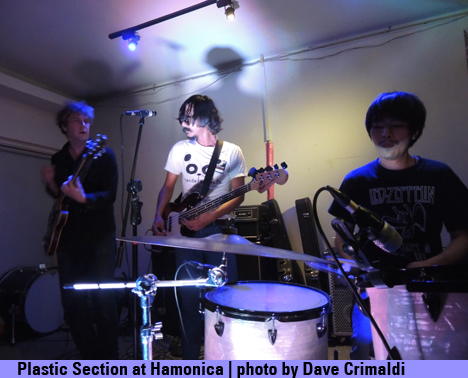 Zoo - My own dip into the Bangkok underground may have started at Zoo with a rock and roll band called Plastic Section. After an hour walking around getting lost by virtue of Google maps, I finally found the small shophouse run by a JD, a lecturer at one of the nearby universities. Bands have to bring their own gear, but the lighting and visual displays projected behind the band make it a choice place to catch show. Haven't been out there in a while, as it's far from where I live. The last show I saw there featured the agile instrumental post rock bands, Aire, Inspirative, and Kinetics.


Overstay - The colorful hippie enclave of Overstay is mostly associated with DJs and electronica but they can still put on a riot of a rock and roll show. There are plusses and minuses to the venue. It's actually a more of a commune with dorm rooms, self-serve kitchen, twenty-four hour bar, and the ambience of tropical island hedonism without ever setting foot on a boat. The downside of the venue is the location on Charansanitwong can be difficult to reach, especially for people arriving in taxis on a Friday night. It has played host to several punk and hardcore shows. Some of the highlights for me have been the avantgarde duo of Stylish Nonsense, the now-defunct garage rock band Bone Clone performing with The Sangsom Massacre, and the legendary punk rock lords of destruction, Blood Thirst Spider aka BTS.


Panda Records - This isn’t a venue, but worth mentioning due to its influence in underground music. There’s a very influential indie record label in town called Panda Records. It was founded over a decade ago by Wannarit “Pok” Pongprayoon and June Kalambaheti of the experimental duo Stylish Nonsense, and June Sangkaew of the wonderfully weird Bear-Garden over a decade ago. Panda supports independent music by producing and distributing CDs and merchandise and hosting festivals such as Stone Free and Noise Market. The label operates as a non-profit organization and their festivals are epic. I've been to Noise Market 1 and 2 and they’re totally free with great bands, as well as arts and crafts. In keeping with the spirit of independent artists, you don’t need to be on the Panda label to play Panda-sponsored festivals. Notable bands on Panda of late would be Hariguem Zaboy, Triggs And The Longest Day, Monomania, and Chladni Chandi. 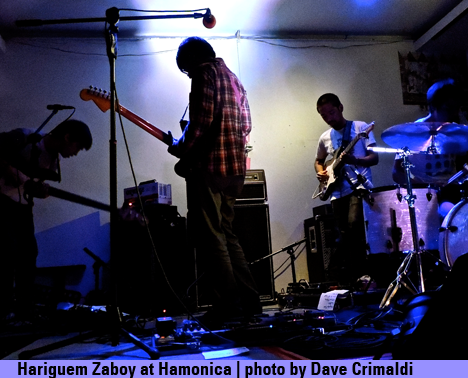 
At best, the Bangkok scene could be described as small but emerging. It’s still in its infancy and some would say it's as good as it's going to get in terms of camaraderie and a real sense of community.

Dave Crimaldi is a music blogger, photographer, and drummer living in Bangkok. He sometimes gets drunk and passes out on floors. See photographs of Dave passed out here.