The night began frantically enough with a late start to the Sunset Strip, compounded with a detour through downtown and MacArthurPark when I missed my exit on the 110. After losing more time trying to find parking and getting a photo pass, my friend Phil and I missed Revolution Mother and about ten minutes of Flipper. Parking on the Sunset Strip is definitely on the top ten of most frustrating Los Angeles activities, right up there with having to take the 405 anywhere between the hours of 7AM-8PM.

While I was waiting outside for the girl working the will call to run some copies off of photo release forms, I started to get antsy because I could hear a wall of noise going off inside that I was guessing had to be Flipper. This was confirmed as I made out bits and pieces of “Ha Ha Ha” as people went in and out of the venue. As soon as I got in, I booked it posthaste to the stage.

I’d heard of Flipper for a while, but since almost all of their stuff is out of print I never really had the chance to listen to them. About two years ago, I happened upon an mp3 of the song “Ever” which I believe might be one of the all-time greatest punk songs, as it’s one of those rare songs that manages to be completely pissed off, nihilistic, depressing, and life affirming all at the same time. After that there was no turning back, and I’ve managed to get copies of most of the stuff they’ve released. I’d seen Flipper a couple times over the last couple of years, but I was really excited this time because of their new bassist, one Mr. Krist Novoselic. I also admit that I wanted to see the “What the fuck?” reaction that I was pretty sure a lot of the audience was going to have.

For the non-initiated, Flipper’s sound is slow and massively abrasive. They also play the really weird trick of sneaking hooks into almost-melodic songs, which sometimes consist of nothing more than two or three bass notes repeated into infinity. The band seemed to be on their game tonight. Ted Falconi blasted all kinds of unholy noise from his guitar, Krist held down the heavy as hell low end, and Bruce Loose stalked up and down the middle of the stage. Drummer Steve DePace bashed away at the drums, while maintaining a huge smile most of the time. Bruce Loose is a great front man who throws out just enough sarcasm and creative lyrical reworkings to keep everything interesting.  The highlight of the evening was when Dale Crover and King Buzzo from the Melvins came out and joined the band for the closing song, “Sacrifice.” It was a virtual summit of the gods of awe-inspiring noise amazingness and I, for one, was happy to be there. And yes, there were a lot of people in the audience who were having a hard time getting through the set, which was pretty bad ass. 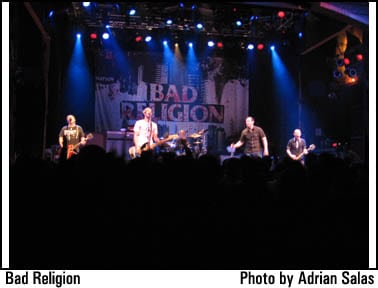 Bad Religion (Minus Mr. Brett) came on after Flipper and proceeded to not really let up for the rest of the night. It was a great night, as they played nearly all my favorite songs: “New Dark Ages,” “Generator,” “Los Angeles Is Burning,” “Fuck Armageddon, This Is Hell,” “Do What You Want,” “Suffer,” and “Along the Way,” to name a few. For the encore, the band came back out and played a short acoustic interlude of a couple songs, that I honestly don’t know – but it was still an interesting change of pace – before they came back and finished off the night with a few more songs including “Infected” and the show closer “Sorrow,” Basically, the only favorite songs I didn’t get to hear tonight were “Let Them Eat War” and “Frogger” so I can’t really complain at all.

Something that I found great during the set was Greg Graffin’s habit of doing cheesy little introductions for songs. A great example was him talking about being on the radio the next morning and saying something along the lines of, “Maybe we’ll get to be behind the news desk where we can bring you the “News from the Front”” (cue the song “News from the Front”). Also, the super buff shirtless guy in the pit who knew every word to every song, and sang his heart out the whole show, never once stopped being entertaining. I applaud you buff guy, for you were the unbilled star of the night.

FOR SCIENCE: Revenge for Hire: CD