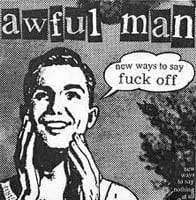 Pick it up here:
/catalog/index.php?main_page=product_info&cPath=&products_id=739

From the cut’n’paste punk collage art full of appropriated logos, obscure album art, and hand-written lyrics, to the scene conscious/world conscious/self-unconscious song topics, it was only logical for these five tracks to be pressed to vinyl after originally appearing as a demo cassette last year.