Avail: They've Got a Cheerleader with Poor Dental Hygiene By Todd Taylor 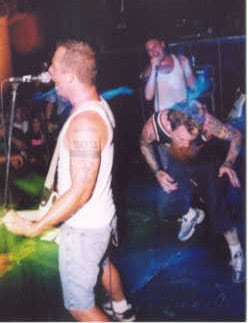 In it for the long haul without sucking wind, slowing, or softening, Avail's a band that has figured how to sculpt social protest into and through personal turmoil. They hate fights but love circle pits. They disallow disrespect at their shows, stopping mid chord progression if they see it, but they don't mind lots of jumping around and having a good time. They're not pricks about it. They don't wag accusing fingers. It's this visceral intelligence that sets them and their albums apart. That, and they fucking shred. The result's not only great, hard, melodic music, but the creation of a great time doing it, listening to it, and encouraging the audience to scream along. Avail's got it right, and for that, I love them for it. They've been doing it for so long.
I bet even if you beat them with a bat that had "rock star" backwards on it (like the Fear logo on brass knuckles), they'd still look like a bunch of guys standing in a convenience store parking lot before their show and act like the most humble people you've ever met after their set blows your ever-loving mind.

I caught up with Tim. He's the singer. We've talked before.

Todd: I'm going to pretend not to know you so well.
Tim: That will be really hard.
Todd: Give me a little background. How long has Avail been going on for?
Tim: God, this is stupid, Todd, doing this with you. Avail's been together for ten years or so and playing for the last nine.
Todd: And you're from Richmond, Virginia? 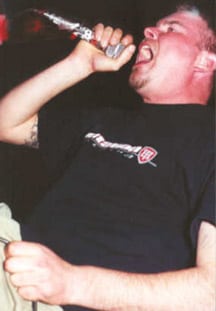 Tim: [chuckles] Yeah.
Todd: How did you not become a redneck?
Tim: I wouldn't say that we're not. Joe [to the guitar player], living in Richmond, how did we not become rednecks? Because we're not. We're fucking white suburban kids who lived there for ten years.
Todd: Did you know of any time you made a conscious decision not to become a beer-swillin', four by four-drivin' bad individual?
Tim: Hmmm. You know what? I have a big truck. I'm not joking. Not long ago I had a big beard and I wear a mesh hat. Maybe we're straight right fucking out of the ghetto.
Todd: OK, then why do you guys have such a positive message in your music when all of the external trappings of being a stereotypical redneck are there?
Tim: Because it's not a positive message to anyone other than myself. Seriously. Some of those lyrics I'm writing, I'm talking to myself - "You need to chill out."
Todd: There are a lot of abandonment issues and self-scathing observations.
Tim: I'm fucking really hard on myself and that's what those lyrics are. Fucking me telling myself to keep it up instead of giving it up.
Todd: Two part question: many of the socially conscious bands grow disillusioned after attempting political change for a decade and they begin to feel like they're not changing a damn thing. How have you guys maintained and actually accelerated your energy towards that?
Tim: When you're talking about bands giving up, that sort of thing, they're trying really, really, really hard and they have a goal. Their intent is to educate and get people worked up, and that pushes them into action. Our intent has never been to do anything like that. Our intent has been just to be expressive and we've never had a goal of changing something. That shit just comes out, those words and the music, and there's no fucking goal. That's what I think makes it work.
Todd: I think so. This sounds dumb, but you guys are motivational.
Tim: Motivational speakers [half chuckling].
Todd: You're riling people up and getting them excited and it doesn't seem empty and it doesn't seem like a joke.
Tim: Or an image. You know, politics and punk as an image or this emo crap... we're pretty much the full band version of Billy Bragg, where half the songs are love songs and half the songs have social issues in them. I realized that recently that's why I liked Billy Bragg so much.

Todd: OK, so the second part to the question: one of the largest things detractors complain about is that loud, fast, socially conscious music is "preaching to the converted." Do you have any way of explaining why that argument isn't completely true?
Tim: People love to be negative. People love to dismiss anything that is creative, really quick, by really generalized statements like we're "preaching to the converted." That's a profoundly boring statement. Number one, we're not preaching and number two, we're not preaching to the converted. And if you go to an Avail show - shit, we just got of the Warped Tour. "The converted," they've been smoking street crack rock if they think that those people are converted. In fact, we were doing a Food Not Bombs show in Richmond right before we left. We always do them. And one of the women that was doing the table, getting ready for the Philly demos (Republican National Convention demonstrations) didn't have enough room for all of the pamphlets. So she pulled out the stack of Mumia Abu Jamal flyers. And she was like, "Everybody here knows about Mumia." And then I looked around. I put my arm around her. I said, "Look around. These fucking people have no idea who he is. Put them back on there." And she did. So it's just a crack statement. It's just people stuck up. They're converted or they're bored, making mad generalizations.
Todd: I was thinking this in preparation - not as a dispersion at all - a lot of your audience is young. And what a great introduction to social change: exciting music.
Tim: And that's what happened to us. Beau and I were talking about that the other day. We got turned onto the bridge between music and politics through Positive Force shows in D.C. First one that comes to mind is seeing Verbal Assault's last show at a church and when the show ended, as people walked out the door, they were given drums and pans and drumsticks and we all walked over to the South African embassy and protested Apartheid. Nowadays, bands like us and Hot Water Music and a handful of others are an introduction, an alternative to the alternative. Especially just getting off the Warped Tour, a lot of kids go to that and say, "This is the biggest alternative festival ever." And then they're "Wait a second, it goes even further underground." We were lucky to be on it with Hot Water Music and other bands that are underground enough and established enough that these kids can maintain coming to those shows and still be excited because it's people getting down with the bands that are playing.
Todd: Speaking of Hot Water Music, have you guys ever considered doing a side project like their Rumbleseat or Unitas?
Tim: You know what? Joe's going to do that shit eventually, without a doubt. For us, Avail is time consuming. Actually, Joe writes a lot in the band room, as do I, and we just kind of write for ourselves and if it turns into Avail stuff, it turns into Avail stuff. So if you go through the hundreds of four-track tapes that we have in there, we could actually put something out right now, but we'll just leave it and maybe fuck with it some other time. That's such a good idea, though. I definitely want to do that someday. I was talking to Mark, who records us and is recording Hot Water, and he was like, "Any time. We'll pack in some beer and roll with it."
Todd: Rumbleseat is so great.
Tim: It's fucking excellent. Robbie from Ann Berretta just did a CD similar to that as well.
Todd: Who would you be most honored if they covered one of your songs?
Tim: You know what? Not one band because if any band, even if it's some high school kids, covers one of our songs, I'm so fucking flattered.