Atom and His Package: With Only His Synthesizer and Wit to Proctect Him... By Todd Taylor 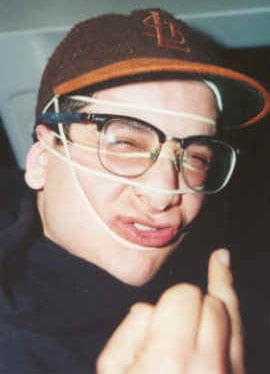 Atom and His Package. You have every right to hate him. Some folks do. Deeply enough to threaten to bathe him in blood. Some people in hardcore punk circles adore him like a piece of new gum bound to lose its flavor quickly for them, smacking up his humor in a genre that's infamously dour and straight-faced, almost to the point that to show a smile is a form of weakness. Then there's the several thousand who, perhaps against better judgement and the forefeiture of any toughguy posturing, have found some flashes of something more substantial, perhaps great, in a mild mannered, grandma-loving, non-littering, ex-"non athletic sports" summer counselor guy with only his sequencer and wit to protect and project him around the world.
It's a little bit of alchemy. Somehow he's figured that he could take mid-eighties puffhair, lightweight audial cotton candy like the title track to "Beverly Hills Cop," juxtapose it against muzaked punk standard bearers like the Misfits, give it an indian rug burn, jack its underwear deep into its crack, and make songs that condemn the English tables of measurements, tell tales of joining a gym with his father to become more attractive to Enya, and why he's glad that Judas Priest's Rob Halford came out of the closet. Some of the riffs that he's come up with can worm itself deep inside your brain like a candy corn virus; sweet but somewhat dangerous on how deeply and easily it infects, like a commercial you can't get out of your head.
Believe it or not, he rocked the fucking house.

Todd: What's in your stomach.
Atom: Tubular pasta. Soda. I'm not got of thinking of anything funny on the spot. And half a liter of goat semen - oh, don't write that.
Todd: What's your first clear memory of an experiment gone completely wrong?
Atom: This is the best one. I was a student teacher and my quote, unquote mentor teacher for chemistry, I'd just done a lab, and said, "Good job, but you gotta stress the safety factors a little more." So, actually, this doesn't answer your question but it's a good story anyway. Then he teaches a different section right after me. So he teaches and I just observe it and they get done like ten minutes early. So he takes this basin of water - I'm sorry, I just burped and it smells bad - puts some dish detergent in it and he takes a tube from the bunsen burner gas lines and puts it in there so it suds up and they're all filled with gas. And he takes them in his hands. And he had the students - he had a stick with a candle on the end which he gave to the students - and they light it and this big fireball goes up to the ceiling and I was sitting there thinking oh my god. Then he gets the students to do it. And I shit you not, right after - the bell rang, everybody went crazy because they just had fireballs in the classroom - and he comes up to me and he goes, "What's up Gore," because he never got my name right, "So you did a good job, you just got to stress the safety factors a little more." I swear to god that it happened exactly like that. It was insane.
Todd: Explain yourself and the music that you do.
Atom: I kinda think of them as just songs, but I guess if I were to explain it to someone who hadn't heard it, I would say it sounds like eighties pop music but with punk ass motherfucker lyrics that are often really, really clever. I'm really smart. I tend to think of them more as pop songs, really. If they're played on different instruments, they're pop songs.
Todd: Did the LP "Pac Man Fever" affect you all as a child?
Atom: No.
Todd: Was there any difinitive LP that changed your mind on music?
Atom: I don't think so. I've always, definitely, been a music person and always have music on. It's hard to think of one record that I listened to and went "Oh my god, that's my calling." Nothing as dramatic as that but I'm definitely a music fan who believes really, really strongly about the things that I do like and very strongly about the things I do not like, as well.
Todd: When was the last time you were in the hospital and why were you there?
Atom: I dunno. My dad's a doctor. Probably nothing. No good story. Just probably to just say hello. I've never been injured or broken anything. I'm immortal.
Todd: Talking about immortality. Didn't you do an impromptu set at a black metal fest?
Atom: No. But I play - not so much any more - but when I was first starting this out, I'm definitely within the punk scene so I know all the people who did the super crusty punk or the tough guy metal shows, so they would always stick me on. Spazz, His Hero Is Gone, Hellnation, Atom. I played with bands, definitely, that wouldn't necessarily go along with what I do, but I think it works well - lots of people who hate it, so it's really fun for me, too. 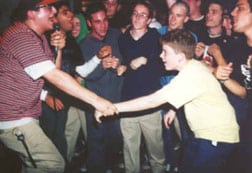 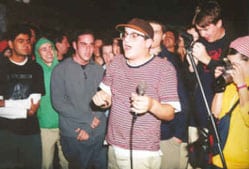