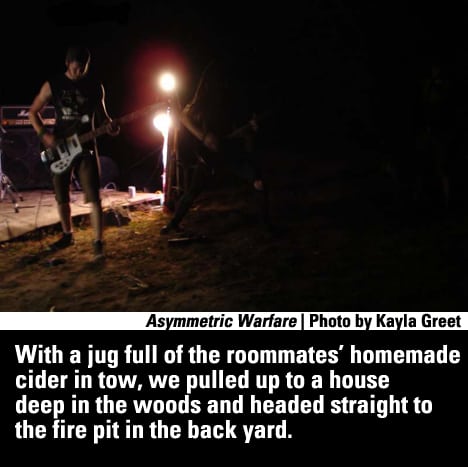 I took a trip to Olympia a couple years ago to see a friend who recently moved there from Oakland. I hadn’t spent time in Washington’s capital since I graduated from college in 2006. In my formative years I had two close friends living there who I visited often. They decided they had to get the hell out of Olympia when we stopped being teenagers and the big city of Seattle was their destination. I’m not one for change unless I’m forced and have been content with Tacoma for over twelve years now. I’ve watched close friends move to Chicago and the Midwest, Seattle, and more recently lost four friends to the super hip city of Portland.

So, the day I spent in Olympia made me nostalgic for times when I could get together with friends and we made the absolute best out of just being around each other. Those were days before we knew there was anything better out there in bigger cities. They were days when all we had were weekends and all-ages shows.
My friend and I walked around and I got to reminisce and tell stories about what the city was like for me when I was fifteen, each building and street sparking another memory.

I told stories, while he told jokes as we walked. We later went back to his house, where I met his roommates who had a youthful exuberance that I don’t see much of in Tacoma. Seconds after meeting me they extended an invitation to go to a grindcore house show near Steamboat Island. The bill was Asymmetric Warfare and Black Breath from Seattle, plus a local opener. Not having any other plans for the rest of the day, we accepted.

This is where I ran into a juxtaposition of my nostalgic days as a baby punk in Olympia and the twenty-five year old that I am who drinks and smokes at shows. With five people, beers, cigarettes, and a jug full of the roommates’ homemade cider in tow, we pulled up to a house deep in the woods and headed straight to the fire pit in the back yard.

We sat by the fire and I received a warm welcome from the flames and the people I just met. Everyone was waiting on the other bands to show up before anything got started since one of them was supplying a PA. A beer or two was had as I got to know the small gathering of people surrounding the fire. It was at that point Asymmetric Warfare’s drummer informed everyone that the other bands and the PA were not coming.

A series of groans and protests swelled up against the sound of crackling firewood and the only band who’d shown up as expected was faced with a decision. They took a poll from the crowd and there was a consensus that hanging out around a fire was nice, but people had come out to see some music! Asymmetric Warfare, still totally down to play, weighed their options, finished their drinks, and started to unload their gear.

Since there was no sound system available, they grabbed their amps from the van and extension cords from the house. There was no way of setting up a mic for vocals, but they were determined to put on a show regardless. With two fresh members in the band and no singer, they cruised through a handful of older material and decided to end the set, start to finish, with the new album they’re in the middle of recording.

Asymmetric Warfare played a fairly formulaic brand of crust/grindcore with heavy metal elements while we were out in the elements of an autumn Northwest night. Their singer’s yells—though barely audible—still managed to hold their own alongside double bass and shredding guitars. Backlit with only a few lights from the house, the fire flickered and glinted on the band through brutal riffs. As they started their last song, a glow of red and blue filled the darker spots of the woods. I have no idea where a noise complaint could possibly have come from way out there, but the police let the band finish up before giving us a stern warning.

The crowd of about twenty twenty-somethings and an array of dogs formed a semi-circle around the musicians thus bringing my night in the South Sound full circle. Though riddled with alcohol, tobacco, and more existentialist conversations than I recall from my youth, this show embodied everything I had been feeling earlier, waywardly wandering around Olympia.

No matter the circumstances, what we did was for the community. We participated for the music, for the conversation, for the lack of anything that could make this evening better. The small gathering of people made the absolute best of a situation that did not go as planned. We may be older, but on the inside we all are still those young kids who take what’s thrown at them and smile because we have no idea what’s coming next.

To hear some of Asymmetric Warfare’s music online, click here.