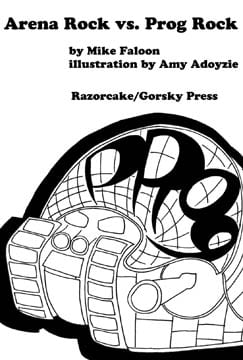 I trusted Leon in a lot ways but I didn’t follow his radical changes in music. I doubted what he had said about folk back in tenth grade and then, senior year, when he got into punk rock, I doubted him again. I had never heard punk, but I dismissed it anyway. I had good reason to hate punk rock. Since ditchingTop 40 radio in junior high, I had listened to both kinds of good music: arena rock and progressive rock. Some people will tell you the styles are inseparable. They will cite bands like Kansas and Styx. Never trust anyone who cites Kansas or Styx as exemplars. Aside from a couple of surface similarities—both camps believed in the intrinsic value of bass solos and gatefold double album sets—arena rock and prog rock weren’t different types of music so much as competing philosophies that formed a two-party system with a shared message: rock music was a spectator sport.

Arena rock bands made it clear that I wasn’t cool enough to join their ranks. They wrote mindless odes to having a good time relentlessly pandering to the lowest common denominator. Take .38 Special and their 1982 album Special Forces, which featured “Breakin’ Loose,” “Take ‘Em Out,” “Rough-Housin’.” Either they were trying to save on their typesetting bill or they wanted to show us that they were bad boys ‘cause they used bad spellin’. I doubt, when it came to tallying merchandise sales and gate receipts, that the band’s ‘rithmatic skills were equally sloppy.

Droppin’ all those “g”s was one thing, but how best to accommodate the fan unable to read? Cowbells. Copious amounts of cowbells, clonking out the quarter notes, insuring that anyone, regardless of literacy or sobriety, could find the beat. The rock gods treated their fans like cattle, herding the masses together to boogie down. (That is before “boogie down” developed a disco connotation at which point the industry officially altered the jargon to “rockin’ out.”)

Arena rock bands loved flashing bravado, or at least that a strange strand of ‘70s style bravado—pasty, scrawny guys wearing oversized hockey jerseys or leather vests with bouquets of chest hair creeping out, slinging guitars with two, three, or six necks. They put their lifestyle on display, reminding fans that the life of an arena rocker was far removed from ours, anything but pedestrian. Like when Eric Clapton used the inner sleeve of his Slowhand album to parade his collection of sports cars. Mildly decadent lyrics about getting high and getting laid were also part and parcel of the lifestyle. Not you, the listener, having sex—there was nothing participatory about the arena rock experience—but the guys in the band scoring with the ladies, typically referred to as “mama”s. You were in your parents’ basement, alone or with your equally hard up buddies. As a fan your job was to root for the guys in Bad Company or Foghat to get laid.

There was no harm in escapism. I had a lot of good times listening to my arena rock records. Until I started paying attention to them. That’s when the confusion set in. I understood, for example, that Grand Funk Railroad were kidding when they sang “We’re an American Band,” but why did they feel compelled to pose nude for the album cover? And Journey, were they auditioning for National Lampoon when they wrote the song "Hustler:"

“I get beside women all men desire
Crazy with passion I'll never be tired
Money's no good to me 'cause lovin's my game
I don't need no trouble and I'll show you no pain
I move like a lover, so silent and swift
Screamin' women love me, just can't resist
I can't be bought, your payoff's no good
So lock up your women, like you know you should”

I think .38 Special spoke for many in the field of arena rock when they sang "I ain't no messiah/But I'm close enough for rock'n'roll" (Rockin' Into the Night")

It was the first Boston album that confirmed my suspicions that arena bands believed too much of their hype. I think Boston wanted to save us. They told us in songs like “Feelin’ Satisfied” (“Nothin’s gonna help you more than rock’n’roll”) and they showed us on their record covers, which laid out the game plan for Boston’s cult-like mission. Boston’s first album cover depicted the band escaping from an exploding planet, presumably ours, flying across the universe in the Starcruiser Boston. Earth’s too small for us, too confining; Our rock’n’roll necessitates the infinite expanse of outer space—we gotta break free. Their second album showed the Starcruiser Boston preparing to land in the valley of a new world, searchlights blazing, scanning the surface for squares who might impede on the band’s pursuit of a good time. This imagined intergalactic outpost would be a place where the band and a select few—hot mammas, dope dealers, maybe a guitar tech or two—could safely rock out, pilgrims for the modern age, without the mess of persecution or convictions or hardships. As a fan, all I could do was hope to be among those who ascended into the heavens with Boston before earth met its demise.

Progressive rock bands agreed that rock music was a spectator sport, but they varied the message: you lack the talent to do what we do. They took listeners back in time with mystical lyrics about knights and damsels. Clad in flowing robes, they replaced riffs with interludes and played in the most unconventional time signatures possible. Prog rockers didn’t play instruments so much as operate them, twiddling and modulating and monitoring. They resembled NASA technicians as they launched the most cumbersome compositions, eight-minute songs mere preludes to suites that consumed entire album sides and were broken into movements noted with Roman numerals—the song listings reminded me of outlines for high school history papers. Prog rockers were to be taken seriously and I loved them for it, the more complicated their songs the better.

No more grounded than their arena rock brethren, prog rock bands were stranger. They too enjoyed getting wasted and getting laid, but I assumed that there was at least one guy in the band who would stay up late at night studying The Tibetan Book of the Dead or setting Beowulf to 7/4 time. This was the same guy, usually the lead singer or the flutist, who failed to realize that it wasn’t his recitation of Hobbit history that turned on the groupies. (“Gather round, ladies, for I’ve a tale to tell, a tale from the Red Book, a tale of Bandobras Took, son of Isengrim the Second, a mere four feet, five, and yet able to ride a horse!”)

Prog rock bands wanted to enlighten audiences with long-winded concept albums. A noble goal perhaps, but their tales were impenetrable. Recognizing that most of their fans were mere mortals, prog rockers offered their version of Cliffs Notes, attempting to provide clarity. Genesis offered a novella expounding upon the intricacies of The Lamb Lies Down on Broadway. Yes used their liner notes to connect the dots between their exploration of Shastric scripture and the legendary Tales from Topographic Oceans, one movement broken into four parts and spread across four sides of vinyl, including this pithy nugget of a lyric from “The Revealing Science of God”: “Dawn of light between a silence and sold sources/Chased amid fusions of wonder in moments hardly seen forgotten/Coloured in pastures of chance dancing leaves cast spells of challenge/Amused but real in thought, we fled from the sea whole.” (Which sounds more like William Shatner every time I read it.) Was this really progress from the days of “Maybellene, why can’t you be true” or merely a clumsy regression to Gregorian chant?

The most perplexing of the concept albums was Emerson, Lake and Palmer’s Tarkus. True to their prog rock nature, ELP included a set of illustrations to guide listeners through the labyrinth-like tale of Tarkus. The first panel shows a volcanic eruption spewing forth an enormous egg, which cracks and yields the title character who is half armadillo and half Sherman tank. Tarkus roams alone. He approaches a pod city, whose citizens send forth a probe. Does the probe come in peace? Does it seek conflict? Tarkus destroys the pod before its intentions are revealed, standing over its smoldering remains, both gun barrels smoking. Then a mecha-pterodactyl, half dinosaur, half B-52 bomber, descends from the clouds. Is he friend? Is he foe? It’s irrelevant because Tarkus’ anger issues surface again and the mecha-pterodactyl is soon dead, followed by the next causality, a submarine with long grasshopper-like legs. The final foe is the dreaded Manticore, a lion with the face of a gorilla and a metallic scorpion tail. Manticore cuts Tarkus’ eye and though the winner is unclear, the battle with Manticore takes its toll on Tarkus. As the illustrations come to a close we see Tarkus standing in the surf, the waves gently lapping at his treads. His guns have cooled and he gazes to the horizon, lost in thought.

That explains, or at least accounts for, most of the songs on side one, which ends with an instrumental called “Aquatarkus.” After all he has endured, Tarkus, the ultimate terrestrial killing machine/animal moves into the marine world for further mayhem. Having conquered land and sea, could flight be next? Was Interstellar Tarkus to follow? And what did Tarkus seek? Truth? Destruction? A warm embrace to fend off the nagging notion that we spin randomly in a godless universe? Did he choose to kill or was he programmed that way? Did Tarkus represent mankind?

As with arena rock, prog rock, ultimately, was an empty experience that left me with questions I didn’t want to consider. I could not relate to pre-historic armadillo tanks any more than I could imagine escaping via the Starcruiser Boston. It was time to borrow some records from Leon.

This Razorcake ebook is made possible in part by grants from the City of Los Angeles, Department of Cultural Affairs and is supported by the Los Angeles County Board of Supervisors through the Los Angeles Arts Commission.