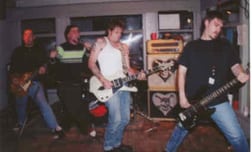 Apocalypse Hoboken: If It Was Easy, It Would Be Kind of Pointless By Todd Taylor

As one of the band members said after the interview, Apocalypse Hoboken is like they're singing a lullaby while shoving a hand down your pants. And that's a perfect feeling: molestation, celebration, and self-styled wonder fills their music.
If you have at least one intrepid bone in your body, may I suggest "House of the Rising Son of a Bitch," "Microstars," (both on Kung Fu) or the healthy collection of singles, comp tracks, and 7"s called "Inverse, Reverse, Perverse" (Suburban Home Records).
They aren't for everyone. But they should be.

Interview and pictures by Todd 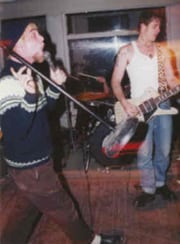 Todd T.: So, Todd, have you ever tasted your own come?
Todd: UmmHmm. It was ten or eleven when I first started masturbating and just out of curiosity I tasted it. I don't know. Do you think that come smells like bleach a little bit?
Todd T.: I never thought about it.
Todd: My grandmother, when I was little and I would stay at her house, she would wash my feet in bleach and it used to make me sick because it smelled like come, and to this day I can't stand bleach.
Todd T.: Is or was drug use an incremental part of the band's musical direction?
Andy: I think that depends on which member you talk to. I just drink. Kurt... I don't want to get Kurt in trouble with his parents.
Kurt: How drug use influenced how I play?
Todd T.: Yeah, how you play.
Kurt: No, I don't think it's instrumental in anything that I do, as far as playing or how I approach songs and stuff.
Eric: I do a little bit of everything.
Todd T.: Well, I guess I'm asking because you guys are kind of... wacky. Wackier than your prototypical punk band. So where does that wackiness come from?
Todd: For me, in particular, I have somewhat of a fascination with drugs, and I experiment here and there. Lyrically, the subject of drugs comes up quite a bit and it's kind of left up to the listener exactly what I do and what I don't do, but I think an altered state is something that's important to me. I mean, bands like Butthole Surfers and Jesus Lizard and stuff, those were bands that I would get fucked up to. Their music did something to me when I was in an altered state. I don't know if Hoboken did that for anybody else, but I would kind of hope so, 'cause at least that's my angle on it.
Todd T.: Looking around you or looking back, is this a big mistake?
Todd: What do you mean? The band?
Todd T.: Yeah. Are you happy with it?
Kurt: I just laugh it off. It's a huge mistake but it's a fantastic time and I think we're doing good things. Todd: If anything, we're in our own favorite band. We've met a lot of totally great people and the band in itself isn't a mistake at all, but a lot of our touring has been a mistake. I honestly think we could do things in another way because we're not going to just cram ourselves down someone's throat. We're not an easy pill to swallow and touring with bands like Strung Out and The Assorted Jellybeans and even The Suicide Machines, just isn't going to do it. Those people going to those shows want nothing to do with a band like us. It's not their fault and it doesn't mean that we're a bad band, but it's just the way it is.
Todd T.: Would there be any bands, currently touring, that would complement what you do?
Todd: I honestly thought that going out with Murder City Devils and At the Drive In was going to be a godsend, but it was the same type of thing. I was stoked to go out with them and it just wasn't happening at all, so I don't know what the answer is.
Todd T.: What was the most drastic artistic change you've experienced?
Andy: I think I figured out that all the music I was listening to when I was growing up was the music that really formed all of my style and everything and we got into punk rock because it's aggressive music and it's fun to play, and you can get shows and stuff, but I think, lately, I've gone back to the music that I listed to when I was younger, like before punk rock, just like '70s music and stuff like that. And I'm starting to think in terms of just music instead of being punk rock music specifically. And that's one of the major changes that's happened with the band, and with myself, specifically.
Eric: I think all of us have been doing that a little bit.
Todd: It's been a natural progression. That's what happens to any band and it's been in all of us to do what we're doing now and our next album will be completely different. 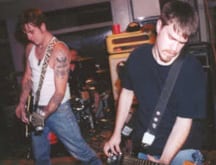