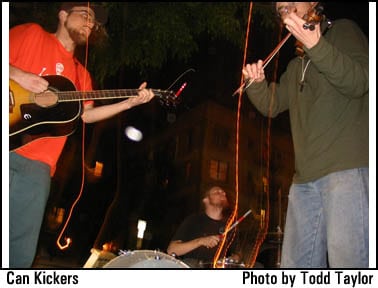 An Introduction To Folk Punk: By Sarah Shay

“Hey, can you recommend any bands that combine punk and folk?”

When a customer came into the record store where I work and said those words to me, I thought I’d died and gone to heaven. It’s a rare thing to be asked about something I’m really interested in while at work, and for the past few years I have been almost completely absorbed with folk, country, and bluegrass—both traditional and modern—as well as the recent influx of bands taking these influences and blending them with punk and DIY ethics.

While the idea of blending punk and folk music is hardly new (just ask The Pogues), in the past few years it has grown in leaps and bounds. Bands have been popping up all over the country with varying ways of combining these two musical backgrounds. Whether roots music was a childhood influence or a later discovery; whether on acoustic instruments or electric, whether covering traditionals or creating their own, bands are taking this musical combination in surprising and new directions. Some take the songwriting style and instruments from folk and country and play them with punk attitude and intensity, like Boston’s Bread & Roses.

“It was never really a conscious decision,” said Morgan Coe of his band’s combination of two seemingly divergent styles. “I originally started Bread & Roses as an electric punk band with my friend Andrew… We only started playing acoustic because our first drummer was often late or absent for shows. The turning point came when he quit and the first drummer we jammed with brought a banjo to practice.”

Bread & Roses takes their roots influence in the form of both acoustic instrumentation and country songwriting style—the punk roots come through in their breakneck speed, devil-may-care attitude, and sometimes lyrical content (although they’ve been known to do straight-up country songs like Merle Haggard’s “Mama Tried”). In Coe’s instance, this eventuality grew from the combination of a childhood listening to country and teenage years discovering punk rock.

There are other artists who have a more roots-centric approach to this combination, such as Connecticut’s The Can Kickers, who describe their sound as “what would happen if Minor Threat and The Ramones picked up banjoes and fiddles and joined a New Orleans-style second line.” The group definitely falls closer to the side of old-time music, but plays their blend of folk, zydeco, and country with an off-the-cuff, what-the-hell attitude not commonly found in traditional folk outfits.

Yet other bands have taken folk instruments and used them to play punk music, like Defiance, Ohio. This DIY punk band features an upright bass, fiddle, and acoustic guitar, but otherwise bears little resemblance to folk music of any stripe. “If someone asks me what kind of music I play, I say I play in a punk band,” said bassist Ryan. “I think we identify much more with the way a band conducts itself than we do to it stylistically.” Cellist and banjo player Sherri added, “I would say DIY punk…I prefer this term to ‘folk punk’ because, at least for me, it seems to reference the ethic beyond the music, and speaks as much about the people listening to it as the people performing it.”

Folk punk, acoustic punk, indie roots, alt.country, cowpunk: all these terms and more have been used to describe this phenomenon. We punks tend to get a little tetchy about labels, and any time you investigate a new musical trend or style, you’re going to run into issues about what to call it. Is acoustic punk different from folk punk? Is cowpunk a variant of alt.country? Does it matter? This is the problem when you try to analyze a music scene that bucks convention and dislikes categorization.

“While it’s convenient to categorize, many bands can get pigeonholed by these terms,” said Erik Petersen of Pennsylvania’s Fistolo Records, a label that specializes in folk-punk bands. “Honestly, these terms aren’t so much describing a music style as they are a scene. There are so many categories and subcategories, it’s hard to find a band that is purely one thing or the other. Something like alt.country is taking traditional country and modifying it in a pop format. Maybe that’s what folk-punk is,” he muses. “Taking traditional folk and putting on a basement show.”

From the outside, these genres seem fairly non-compatible—taken on stereotypes, they could be called diametrically opposed. So why are they being combined so often, and often so well? “When you look at (folk, country, and punk), they have similar evolutionary stories despite their varied styles,” said Petersen. “It’s all essentially people music, and human songs, much more accessible than classical or overproduced pop or the many electronic subgenres. So much folk and country is rebellious, whether pastoral or urban. It wasn’t a contrived sound, just people singing about whatever it was they were dealing with. Working, poverty, struggle, love.” Looking at it this way, one might even call punk a brand of folk music, trading backporches for basements and weary coal-miners for angry teens. “I couldn’t say [how it got started],” said Plan-It X Records head Chris Johnston. “I think punk and folk have a lot in common…it’s just that simple political music has always been appealing to the kids who want a change in the world.” This Bike Is a Pipe Bomb guitarist Rymodee agrees, “That’s what I loved when I started finding out about all these older styles. They were singing the same things I had been hearing in punk for so long, just with a banjo.”

Pinning down when a new musical style began is often impossible, but Johnston guesses, “I would say at least ten years. I think This Bike Is A Pipe Bomb was really one of the first bands to combine punk and folk. A lot of people combine country and punk, but they really do American folk music and they play it fast and loud.”

What would This Bike say about being named front-runners of folk-punk? Oddly enough, Rymodee doesn’t seem to agree with the honor. “Right now I would say we’re a punk band. I remember we used the term folk punk before, even before we did any actual folk songs, but I don’t think that’s a word I would use anymore.” He’s not amongst the folk-punkers who had a history with roots music, either. “Definitely punk rock [came first],” he said. “I’ve been going to shows since about 1986, but it wasn’t until 1992 or so that my friend Todd X gave me a Johnny Cash record, and I just went nuts trying to find old country, folk, blues, and random weird shit like that.”

In addition to the humanity-based songwriting, there’s another aspect tying together punk and country—the role of the rebel. There’s a storied history of “Outlaw Country” singers, the best known probably being Johnny Cash, Merle Haggard, and David Allan Coe. These singers took on a rebellious persona, and while Cash may never have shot a man just to watch him die and Hag isn’t really doing life without parole, they embodied the attitude in their songs. And what are punks if not rebellious? Many groups combining country and punk cite these artists as favorites or inspirations. Heck, even ‘70s L.A. punk band The Dils eventually became Rank And File, a straight-up country band, in the ‘80s.

Folk-punk combinations, on the other hand, seem to have first manifested in the form of Irish punk bands, combining rousing Irish pub songs with punk rock. The Pogues were certainly at the forefront, followed by The Dropkick Murphys, Flogging Molly, and countless others after them. This could have merely preceded the combination of punk with American folk, but it seems to have given rise to it: a number of current bands in the scene list The Pogues as an influence, or at least a band they’ve listened to.

Worth mentioning too is the acoustic punk phenomenon: from (early) Against Me! to John Jughead’s Even In Blackouts, these groups play punk music without the aid of electricity. However, bands that identify as acoustic punk are usually just that: punk played on acoustic instruments, without any particular folk or country influence. Still, it is certainly a “sister genre” to folk-punk, in the same vein, played and/or enjoyed by many of the same people. It perhaps stems from the same desire to simplify, to break the music down a little further, and strip it of some of the weights or expectations that have been applied to it over the years.

That desire to simplify is exactly why trying to really pin down what’s happening with this genre and why is a futile effort. Not only is it still developing, its very nature defies close criticism. Let’s face it, punk music has been in need of a little shaking up for a long time, and I think roots punk is exactly the breath of fresh air it needed. Yes, there are still plenty of great bands out there doing more traditional punk, straightforward pop punk, or classic hardcore. But how many more bands out there are doing the same tired old thing with nothing of their own, nothing new? When you need something new, sometimes you can learn a thing or two from what’s gone before. Maybe the old adage is really true after all: everything old is new again.