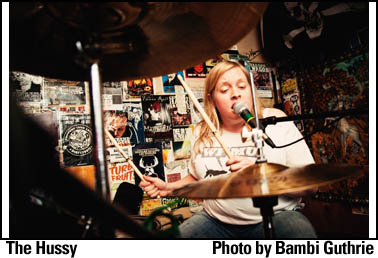 An Interview with The Hussy: Reckless abandon from Madison, WI. By Sal Lucci

The first time I saw The Hussy was in a tiny basement club/bar in my town of Bloomington, Indiana. It’s actually the basement of a fancy restaurant. You have to go down an alley to the rear of the building and down a small flight of stairs. Unless you know where you’re going, it’s easy to miss the entrance. The bar lends itself to an atmosphere of quiet drinking and conversation; you wouldn’t think it could double as a rock club. Since the space is so tight, I was crowded into the corner the band plays in. As the set ended, guitarist Bobby Hussy was making a great hellacious feedback racket. In what seemed like seconds, he was shirtless, licking my face and lighting his guitar on fire. All the while, drummer Heather Sawyer was pounding just as noisily on her drums, but the beat didn’t waver.

The Hussy, hailing from Madison, Wisconsin, epitomizes the reckless abandon of underground Midwest rock’n’roll. The Hussy needs to be experienced live. Watch as Bobby and Heather play off each other, making joyful noise but staying true to the songs’ hooks. I’d say no other contemporary garage-rock-noisy-psych-what-have-you band can better capture the chaos of their live set on record. This interview was conducted in Bloomington April 2012.

The Hussy are Bobby and Heather.

Sal: Bobby, how’s that Jaguar still working, because I remember last year you told me about all these electronic problems you were having and you’re still lighting it on fire a year later.
Bobby: Yes, it still works. It has only missed one Hussy show, ever. I think it was in Chicago that it broke. All the switches are broken on that guitar. I broke a nut before we left for tour. Somehow the string doesn’t pop out of it, so that’s fine. I have to get that fixed. Other than that, everything works.
Sal: Do you bring an extra with you?
Bobby: I have a Jazzmaster that I bring as well. I try not to use it as much. I use that guitar (the Jaguar) at every show.
Sal: Awesome. How do you guys get the energy to play like that every night? ‘Cause you play pretty balls out…
Bobby: I don’t know. I wanna put out records, wanna play shows.
Heather: Wanna play a good show, I guess.
Bobby: Every night, no matter how many people are there, we wanna be consistent. It’s important to be… consistent bands are good.
Heather: Yeah!
Bobby: Sometimes it’s fun to see a band have a train wreck every now and again. I try not to drink too much before we play.
Sal: I’ve found that’s the key.So, let me ask about the picture of the cover for the Eradicator Records 7”. Are you allowed to talk about that? Because I recognize that man, even though it’s blurry in that picture…
Heather: That was after a show in Lafayette (Indiana) at The Black Sparrow. Bobby was up for most of that… it’s Zech. (Zech is a musician who’s been in too many Indiana bands to mention.)
Bobby: Yeah, Zech, he had a fun time with a girl… let’s leave it at that! The next morning I woke up and she was gone and I saw Zech naked and thought “Whoa, what’s going on?” I woke Heather up and she was like “What’s going on?”
Heather: We gotta get a picture of that!
Bobby: I was like, “We’re gonna take a picture of this and then we’re gonna leave.” And then we took two pictures of him and then left. And we kinda waited on what we were gonna do with it and we’re like “I guess we gotta ask him” because he would know it’s him. The floor in this place is covered in photos—like old school ‘70s photos—and in the picture you can see the floor, this unique floor, he was gonna know it was him. So we asked him and he was super cool with it.
Sal: Zech’s pretty easy going. He and I are in a band together. He plays drums. He was temporarily banned from some places in Bloomington and we had a replacement drummer when you guys were here last year.
Heather: Yeah, I heard that.
Sal: He’s a good kid. What is he like, twenty-one, twenty-two years old? He has a good sense of music history.
Bobby: We were bummed. He’s got a good ear. He likes good music. He just likes fun! That’s cool. Indiana is fun!
Sal: A little bit of history—how long have you guys known each other? Not just playing music, but as friends.
Heather: Six years?
Bobby: More than that. Seven years? 2005, I think.
Both: Yeah!
Sal: How long has The Hussy been together?
Both: Four years? 2008.
Bobby: June 2008 was when we played our first show. We were in another band before that.
Sal: That was gonna be my next question! Didn’t you guys tell me you were the rhythm section of another band before that?
Bobby: It was just a band we didn’t really care about.
Sal: Did it have a name?
Bobby: It was called Cats Not Dogs, but it doesn’t really matter. Nobody is gonna know.
Heather: The guy was a jerk, then we broke up, and me Bobby were like, “Let’s just me and you start a band.”
Bobby: I actually joined that other band playing bass. I was a guitar player before that. I never played bass before that. [To Heather] I helped you guys sell stuff ‘cause I couldn’t get into shows. I was like, “If I sell your merch, I could get into shows ‘cause I’m underage.” Then they were like, “You wanna play bass?” and I was like, “Eh…” Then I went back to playing guitar.
Heather: Yeah.
Bobby: It was always from the get-go, you could always tell it was me and Heather. That guy didn’t bond and over time the bond got really ugly. 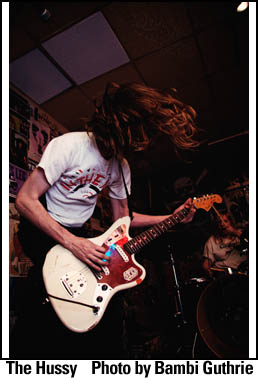 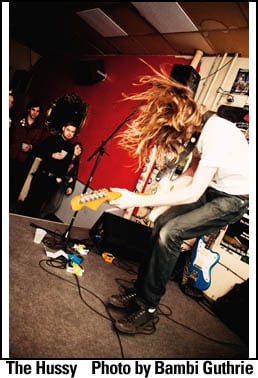