An Interview with Lagwagon: Interview and photos by Sean Logic

It’s hard for me to reminisce about ‘90s underground music. It’s not because I had a distaste for the bands of the time, but moreso the fact that I was at an age where I was more interested in superheroes than I was 7”s. Some of my favorite bands formed, toured, and broke-up during that period, which leaves a lot to be desired today. I have a better chance of seeing a global nuclear meltdown than some of those groups live again.
Maybe that’s why Lagwagon stands out as something special. Not only are its members still playing with a raw aggression that harkens back to early years, but they’re doing it even better—with a confidence and precision that comes with experience. To celebrate their history a box set of their first five albums, fittingly entitled Putting Music In Its Place, was released late last winter. Lagwagon lead vocalist JoeyCape sat down to explain the process behind the re-release and his thoughts on why people continue to connect with the band’s music nearly two decades later.

Interview and photos by Sean Logic

Sean: A lot of people think something like a box set is pretty simple to do, but I know a lot of effort went into this. In one video I heard you say it took about three years to put it together. Can you elaborate?
Joey: Not intensive for the three years, but definitely this year more so. Some of this stuff is so old that you don’t remember it exists. Then you might find something when you’re looking for something else and that opens up a whole new can of worms. Then there are all these people you’ve lost contact with who may actually have those tapes or recordings or photos. But it was a labor of love. It was fun.
Sean: What was some of the stuff you came across that maybe you hadn’t seen in a long time?
Joey: In the early years we were really prolific, almost always generating something. If we weren’t on tour, we were recording or demoing. So there were just so many things I came across—songs in particular that I didn’t even remember existed. Maybe we find an old tape and listen to it and think, “Okay, this is just an old demo.” Then, all of a sudden, another song will come on after it that I don’t remember at all—nobody in the band remembers at all—and it has a different riff entirely with lyrics from a song that ended up on an album three years later. It’s so bizarre.
Sean: On that note of reaching out to the right people, how’s it been connecting with people you hadn’t talked to in awhile?
Joey: It was very cool. There was one guy named John Lions. He went on the very first tour the band did. I hadn’t seen him in so many years, and I knew at some point I had to find him. It was cool—kind of miraculous—‘cause when I did find him he was living in West Virginia in the middle of nowhere with his wife making guitar pedals. The irony of it was I went to him for some material, not realizing I had already asked him for the same stuff when we were putting together (Let’s Talk about Leftovers), and he told me, “Joey, I already gave that to you twelve years ago and you never gave it back.” [Laughs] But it was really great to reacquaint with him, and I got a cool guitar pedal out of it.
Sean: In many ways, this new release gives a “retrospective” kind of vibe to the band’s work. Looking back, how do you feel these records represent the points in time you recorded them?
Joey: I suppose they perfectly represent them. Records mark a point in history for a band. The unique thing about this is we were able to take all our old songs and put everything from that era together. You can really see the evolution of the band. The reason we did this was because a lot of bands on Fat (Wreck Chords) and around, in general, were starting to do these “best of” or “greatest hits” records, which is kind of funny ‘cause a band like ours doesn’t really have “hits.” I mean, we know what songs go over well live, so I guess we call them the hits. [Laughs] But it’s still a big difference. I always took issue with “best of” records because I felt as soon as you do an album like that, especially now in the digital age, that’s kind of the go-to record, and the deep tracks kind of fall by the wayside. And the album, in a romantic sense, does represent that point in time when a band is together and we couldn’t really deal with that idea. Someone at Fat—there’s a little debate as to who it was, but Fat Mike is claiming it, so we’ll give it to him—came up with the idea that we could just do a release and we could put all the bonus material with that early material. And they came out way back then—when mastering was for vinyl. They weren’t necessarily mastered for digital to begin with. So it was nice that this was in lieu of a “best of” record. To me, it’s just a way cooler thing to be a part of. 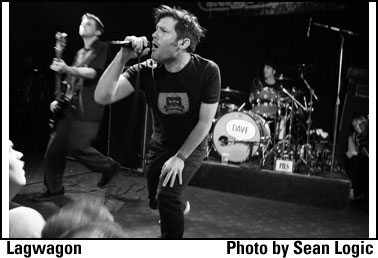 Sean: So how involved were you with the process of the re-release? I know you have some production time on your belt with your solo albums.
Joey: I was involved the whole time. It was basically me and Chad Williams at Fat Wreck Chords. We owe a lot of thanks to Chad for being so amazing and dedicated to it. You find one thing, then you find another. It was a cool experience. I know a lot more about the band now. That was the weirdest thing.
Sean: Like what?
Joey: Like you forget things. You bury things. Life goes on and there are all kinds of strange little details that you either forget or maybe you just blocked out. I don’t know. [Laughs] But, seriously, I can’t believe how many things I learned. People who worked with the band, places we recorded things. I had thousands of photos in my basement and we had to go through all of those and figure out where they’re from. Just towards the end, there was a point where I could actually look at the album now and see our history. I don’t know if a lot of bands can do that if they’ve been around that long.
Sean: Why do you think your music still resonates with people today?
Joey: I don’t know…I don’t think I can answer that question. It’s not something I could be objective about. Speaking for myself, I know there are things I listened to when I was younger and those things just hung on. When you put on a record, it’s almost less about what it is than when you listened to it. When you’re young, you’re like a sponge and you have a deeper connection with music. So my feeling is I think when people liked the band way back then there’s always going to be a little place for us.
Sean: Is there any significance to the set list you’ll be playing tonight?
Joey: We’re only playing songs from the first five records. And we were able to get anybody who’s been in the band that’s alive to come to the show tonight, except for our friend Ken Stringfellow, cause he’s in Paris right now. We’ll also be doing some songs we haven’t done since maybe the first or second tour. We’ll see how those go.
Sean: How’s it been practicing some of those older songs?
Joey: Sang it one time then thought, “I’ll wait ‘til the gig to sing that again.” Some of those are voice killers. I mean, I’m forty-five. I was twenty-two when we recorded some of those songs. Things have changed a little bit. [Laughs] It’s been so fun playing those songs, but they’re just super intense. It should be cool.
Sean: Anything coming up? Tour dates?
Joey: We’re doing a whole bunch of touring. We’re doing a West Coast tour in February. If the Mayans aren’t right and we survive 2012, we’ll be touring the whole time.

Lagwagon will embark on their West Coast from late February through March. For more info. on releases and tour dates, visit the Fat Wreck Chords official site (http://www.fatwreck.com/band/index/1)

Sean Logic is the editor of Ashcan Magazine (http://www.ashcanmagazine.com/), a web/print publication focused on underground art and culture in the San FranciscoBay Area. Connect with him on Twitter @seanlogic (http://twitter.com/SeanLogic) for more punk rock shenanigans.