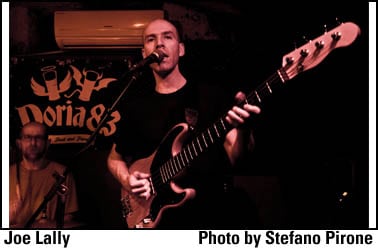 Interview with Joe Lally of Fugazi: By Paul Comeau

For fifteen years, Joe Lally made groundbreaking music as part of one of the most solid and distinct rhythm sections in rock—punk or otherwise. The often funk-tinged sound of Lally on bass and Brendan Canty on drums is so unique, you can’t imagine Fugazi’s sound without the duo. When the group went on indefinite hiatus in 2002, Lally continued making music on his own, writing and recording two solo albums: There to Here (2006) and Nothing Is Underrated (2007), backed by a who’s who of musical collaborators. The barren soundscape on much of these albums rivals the most minimalist of Fugazi’s songs. The stripped-down sound brings Lally’s bass lines and sing-speaking vocals into close focus with their smooth, cool sound and gravelly undertones. Lally spent much of 2010 writing and recording with backing performers Elisa Abela on guitar and Emanuele Tomasi on drums. The result was Lally’s third solo album Why Should I Get Used to It, released this past April as a split on Dischord and Lally’s own imprint Tolatto Records. The album features a more complete sound compared to his previous solo efforts, reflecting a songwriter who has finally come into his own.

Paul: What led to your decision to pursue a solo career and how do you decide who to collaborate with?
Joe: I just couldn’t stop doing whatever it was I was doing before with a band. What I found was I could agree on what everybody needed to do as a band, which, at the time, meant taking a break. But then once that break started, I realized it didn’t mean that I was ready to stop playing. It just kind of has become what it is. I’m just kind of dealing with it as it happens.
It started out as more of a question of where I was going to be trying to play the songs. When I was still living in the U.S., I started out playing alone, which was very strange, just playing bass and singing. Then I started getting in the van with another band. The guitar player for Antelope played drums behind me when I went on tour with that band, and the two drummers in the Melvins played with me when I did a little tour with The Melvins.
That idea was just kind of where I was, where I was going. I kind of figured it out as I went along. If I was in D.C., I played with people from D.C. I kind of knew that I was going to end up in Europe. My wife is Italian and we’ve come to look after her mother, so I just knew that I’d have to make a kind of music that allowed me to be in different places. As I’ve been in one place for awhile, I’ve been trying to hone in on just a couple of people. It’s really come about fairly naturally just because I refuse to stop trying, I guess.
Paul: What is the writing process like for your solo work compared to the writing process for Fugazi or other past projects?
Joe: It’s very different because a lot of it takes place alone. I don’t know how much I like it either, just being the sole person trying to work out the songs to some degree. It’s a tough one because I always want to bounce what I’m trying to do off somebody else.
The band has kind of arrived, that’s the good part. We’re two people in Rome—one who made Rome a place she would spend more time because she wanted to play with me. That’s Elisa. That’s really great and that led to us staying together long enough to find a drummer. The only person I really knew who was a drummer here in Rome before I moved here was always busy. 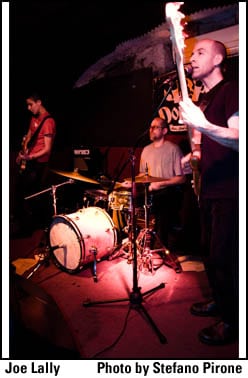