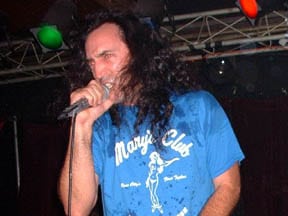 An Interview with DRI: Twenty Years of Violent Pacification By Chris

(All photos courtesy of DRI)

When Todd Taylor first asked me if I wanted to interview DRI I said "sure." Then I remembered that my knowledge of the band stopped around 1984. I had bought The Dirty Rotten LP in 1983 and the

Violent Pacification 7" in 1984 and liked them both, especially the 7" with its superior recording quality. But by 1985 I was burning out on fast hardcore bands and as a result kept only a slight interest in new punk bands and records until 1996 when I reverted to my former punk self. Razorcake writers Jimmy Alvarado and Donofthedead have kept up longer than I and helpfully provided some questions for this interview. Beer City has reissued The Dirty Rotten LP and the Violent Pacification 7" on something called The Dirty Rotten CD. They have also reissued 1985's Dealing With It! on CD as well. Each of these reissues contains tons of bonus tracks from comps and unreleased recordings as well as video footage from live shows and interviews. I also compared them to my old vinyl and the CD re-mastering has vastly improved the sound, especially of The Dirty Rotten LP. Until I went to the band's website (www.dirtyrottenimbeciles.com) I was not aware that they'd never broken up. Only guitarist Spike Cassidy and singer Kurt Brecht remain from the original line-up. Kurt answered the following questions for us. 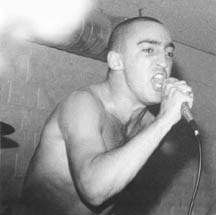 Chris: I recall that your band got its name from what one of the band member's parents referred to you guys as. What do you parents think about you guys still being in the same band, twenty-odd years later?
Kurt: Our parents are very supportive considering the name, abrasive sound, and song content!
Chris: Twenty years on, what do you perceive to be punk's greatest success and its biggest failure?
Kurt: The Sex Pistols! On both accounts.
Chris: Do you still consider yourselves punks? If so, why and in what way do you contribute to the punk community outside of touring and playing music?
Kurt: We always considered ourselves a hardcore band. Never got much into the punk fashion. We're punk in the same way Thoreau was punk. We squatted, lived in a van, lived on other peoples' couches, snuck into shows, ate at soup kitchens, hung out with drug addicts and did all the things I guess you'd associate with the punk lifestyle. We are still non-conformist just in our lifestyle of being in a band and not having a secure job.
Chris: What was it that made so many Texas bands make the move to San Francisco?
Kurt: The chance to play more often. Also, it was a good place to get on a tour.
Chris: I know that you guys did the Rock Against Reagan tour. Do you have any good stories from that adventure?
Kurt: We were paid in food! The shows were free. Dave Grohl (Nirvana, Foo Fighters) told me he bought a 7" from me in Washington DC where we played with the Dead Kennedys in front of the Lincoln Memorial.

Chris: Back when you first moved to San Francisco, you guys were a politically active band as vocal as MDC and Crucifix. Do you feel the band is less political now and if so, why?
Kurt: We still play the old songs. There is just no need to write the same song over and over.
Chris: How, if at all, has your view of the world changed since those early days?
Kurt: My view of the world has not changed. One look at the morning news reconfirms my worst fears.
Chris: When DRI began to play more metal shows did you feel - as the punks did back then - that you had become more of a metal band?
Kurt: We were aware that metal fans were starting to come to our shows and that we were being booked as support on metal shows. Was there ever a conscious decision made to leave the punk scene behind? We never left the punk scene! We brought them with us. That was what crossover was all about.
Chris: In retrospect, do you feel that the crossover scene was good or bad?
Kurt: Good! We are one of the only bands I know of who are regularly asked to play both hardcore and metal festivals. We passed up a US tour recently with The Exploited (My wife is expecting) and Kreator got the Gig. No one's punker than the Exploited and we've always done shows with them. Crossover is still happening, thank goodness.
Chris: Had it not been for punk, what do you think you would have wound up doing with your lives?
Kurt: I was in commercial art school when DRI began, so I'm guessing I would have been an artist of some type.
Chris: Have there been times when you felt like quitting music altogether?
Kurt: Only once when I quit the band for a few days.

Chris: On the record news page of your website (dated 9/20/02) it states that Beer City will be your new label reissuing old releases and possibly a new one. Why is it that Restless Records just released 4 of a Kind and Thrash Zone as The Dirties' Rottenest CD?
Kurt: Restless/Metal Blade/ Ryco have control over those two albums.
Chris: Are you still in touch with any of your former band members?
Kurt: We jam on stage with Felix Griffen, Eric Brecht and Chumly from time to time.
Chris: Have any of them made any surprising change of direction with what they've ended up doing in life?
Kurt: They all have different lives now, still playing music, but not for a living.
Chris: I know that you once wrote about when you lived in a tree in San Francisco. Do you care to discuss your present home or lack of one?
Kurt: I live out in the middle of nowhere in Texas with six and a half acres, a pond and a garden. The house was free (came with the land). It was condemned but I fixed it up and it's almost like a normal house now. This is where I rest and regroup between tours.
Chris: Do you have any interesting memories from when you lived/hung out at The Vats? (The Vats were abandoned beer vats in San Francisco where lots of SF punk bands lived and rehearsed in 1984.)

Kurt: I was there the morning the Vats burned and they kicked everyone out for good. I woke up smelling smoke. I turned the light on in my vat and realized the whole room was filled with smoke! I'd been sleeping on the floor. I felt the door and it was hot. I decided to open the door and there were flames shooting past. I made a run for it, making it out just in time.
Chris: Whose head is on the cover of the Dirty Rotten LP and why did you guys choose that picture?
Kurt: That was my brother, Eric's head. That was a shot of his Mange haircut. We thought it looked awesome!
Chris: On your website you've talked about the possibility of a new DRI CD. Do you have a vision for how to make new music that will resonate with people the way your older stuff still seems to with old and young alike today?
Kurt: We'll write songs we like and hope others like it, same as we always have.
Chris: What were/are the pros and cons of having an established label releasing your music versus putting it out yourselves?
Kurt: An established label has connections, money, manpower and will do all the work for you, while most likely giving you very little in form of profit. Do it yourself and do all the work yourself and you'll get all the profit while becoming a record executive instead of a musician.

Chris: On the 1995 album, Full Speed Ahead you guys re-recorded "Who Am I," which was originally on your Dirty Rotten LP. Was this an attempt to reconnect with your punk audience?
Kurt: We were just reconfirming that we were still the Dirty Rotten Imbeciles.
Chris: What differences have you noticed in the punk audience of today versus the one of twenty years ago?
Kurt: Not a lot except the crossover factor we discussed earlier.
Chris: What have you been working on lately?
Kurt: Look for my Song "Silent Spring" on the Probot CD due out in November. (Dave Grohl's side project.) I wrote the lyrics and sang them, he wrote the music and played the instruments.
Chris: How do you feel about the dis that NoFX gave you guys on their song, "13 Stitches"?
Kurt: Didn't know about that! Can you tell me what they said?

(I sent Kurt another e-mail detailing the NoFX song "13 Stitches." For those of you who haven't heard it, the lyrics basically describe some of Fat Mike's early and violent experiences at punk shows. The third verse talks about a show at which "some Suicidal threw me into a post," after which he sings, "my girlfriend started to cry cause we had to leave before DRI played fifty lousy songs." Kurt's response to this was: "Sounds like his girlfriend liked us at least! Some weird sort of jealousy.")