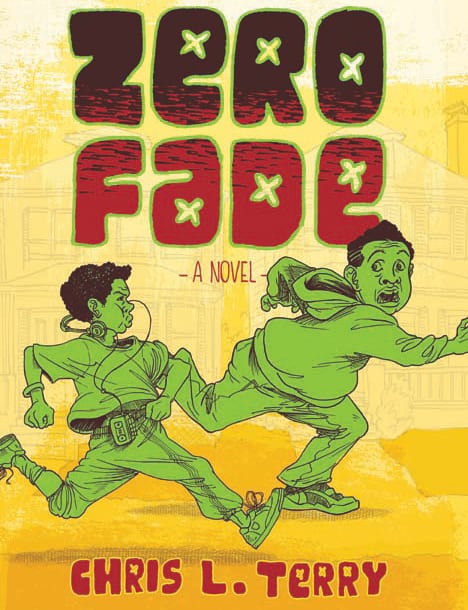 An Excerpt from Zero Fade: available for download as an ebook

To download this excerpt as an ebook, click one of the links below, depending on your device. If you've got questions or comments, we can always be reached here.

Chris L. Terry has been a Razorcake contributor since 2006. Kirkus called his debut novel, Zero Fade (Curbside Splendor, 2013), “Original, hilarious, thought-provoking and wicked smart: not to be missed." ChrisLTerry.com has more of his writing.

Intro:
Zero Fade is told by Kevin Phifer, a thirteen-year-old boy living in 1994 Richmond, Virginia. Over the course of a week, Kevin rethinks his ideas about masculinity as his beloved uncle comes out as gay. The following scene takes place in the middle of the novel, as things are escalating with Kevin’s bully, Tyrell.

This excerpt is part of the Zero Fade Blog Tour, where a different site publishes something about the book each day during the weeks surrounding its release. Visit curbsidesplendor.com for the full itinerary and to order a copy of Zero Fade.

Thanks to Megan Mak Yi Wei for help resizing the image.

Don’t take this wrong, but in gym class, sometimes I wish I’m a girl. That way, no one would expect me to do nothing but get flustered when the ball comes at me. I could scrunch my face and throw it badly and things would work out fine. That’s about what I usually do anyway, but, if I was a girl, no one would care. No one would hit my arm and go, “You messed up,” and hey, I could go into the girls’ locker room after class and watch them change.

The guys took all the forward positions and played a lot of defense, too. They moved up and down the court in a cluster while me and the other three people stood back and acted like we were ready to jump in so Mr. Bisceglia wouldn’t blow the whistle at us. I was just passing my time until the game ended, hoping my team would lose so we wouldn’t have to play whoever won the next game.

Mr. B calls this, “Elimination, bracket-style,” and shouts things from the sideline like, “C’mon, Final Four!” That man is corny.

Things were going OK. The ball hadn’t come my way, and Mr. B hadn’t said nothing about my blue shirt. My team was shooting on the basket, and I was at center court, pretending it was the middle of the world, when Tyrell broke out to catch a wide rebound and came dribbling upcourt, right at me.

The rock music and the squeak of gym shoes and Chiffawn’s honey-coated legs dropped away, leaving me, Tyrell the charging bull, and that dark orange ball booming off the floor as it got closer. Sweat dripped off the tip of Tyrell’s nose and sprayed to the sides with each breath. I remembered throwing the lit cigar all the way onto Tyrell’s balcony and stopped being shook. Tyrell could be got. And I could get him, starting with this basketball. I crouched down, really ready.

Tyrell was set to pass five feet to my right with his eyes locked on the hoop. I’ll be real, I’m bad at sports, but Tyrell acting like I wasn’t even there did not fly with me. I spread my arms into a defense position and cut back diagonally. By the three-point line, I leaned in right as Tyrell popped his arms up for a jumper, and elbowed the side of my head. My face mashed on the sweaty front of his gym shirt.

Most guys bring their PE clothes home every week or two to put them in the laundry, but not Tyrell. And that shirt stank, like cabbagey old sweat, tobacco smoke, and oily body smells. Tyrell made a deep woofing noise and landed a couple feet to the left, grabbing his knees for balance. I spun away, eyes stinging from Tyrell’s sweat, and had to run three steps to keep from falling. I stopped in the paint and, over the ringing in my head, heard someone on the bleachers yell, “Dag!”

I clapped a hand to my ear, which felt all hot. The ball landed in front of the hoop, bounced off the wall, and rolled to a stop by Tyrell’s woolly mammoth feet. He picked it up and whipped it off my side. The air in the ball rang when it hit. I doubled over. The heat flashed in my shoulders and forehead, then turned icy at my toes. I’d been elbowed in the head, hit in the ribs with a ball, had the wind knocked out of me, and never fingered anyone like Demetric had. Plus, Tyrell was hopping on his toes next to me, yelling, “Mr. B! He fouled me, Mr. B! I need a free throw!”

The people on the bleachers started shuffling around, murmuring, and I felt all of their eyes on me. The basketball was stopped on the floor, halfway between me and Tyrell, sitting there stupid like it had no idea of the grief it was causing. Tyrell was still carrying on about free throws. I looked at how his belly bounced while he hopped on his toes and hated him more than I hated anyone since third grade, when I realized Pop wasn’t coming back. No Tyrell would equal no problems. I yelled, “You fouled me, asshole!”

And, like always happens when I get mad, my voice moved from a croak to a squeak, and I clapped my lips shut. I’d never yelled in class. Tyrell got blurry, and I automatically reached both hands up to wipe my eyes, then realized that I looked like a crying cartoon baby. Everyone was watching, necks cocked, eyes wide, mouths hanging. For a second, I felt proud of showing the room that I could be bad too, but then I realized they thought I was crying. I wasn’t. It was silent in the room, but there’d be noise any second.

Mr. B must have been shocked because he just looked back and forth between me and Tyrell, who had his palms up like “What?” and said, “You guys both fouled each other. Let’s do a tip off with…Demetric and Leo.” He gave his head a tiny shake, then clapped twice and boomed, “Come on everybody, heads in the game!”

As Tyrell turned to go to the tipoff, he called me a bitch. I was moving back near the free-throw line when Mr. B went, “Wait, Kevin. That’s not your gym shirt.”

I felt lit up by the whole class’s eyes. I took a big breath that shook when I exhaled.

Mr. B tucked the basketball against his hip like a mama carrying a baby and said, “Why didn’t you dress out?”

I pointed at the Richmond Public Schools logo on my red shorts.

“But where’s your shirt? You’ve gotta dress out all the way to play.”

Mr. B stood center court, like he ran the whole world. A guitar solo started on the boombox. His hand moved to the whistle around his neck. I said, “Well, I’m already playing.”

He couldn’t write me up halfway through class for being halfway dressed. It wasn’t like I’d not dressed out so I wouldn’t have to play. I’d really tried. Demetric looked at the clock behind the cage on the wall and hissed his teeth, like air coming out a basketball. Tyrell rocked his head side to side, stretching his neck, a pleased look on his sweaty face.

“Not anymore. Sit down!”

Mr. B stomped his right foot and pointed to the bleachers. The whistle swung back and forth. I hated him so bad right then. He hadn’t been good enough at sports to go pro, and he’d never even be good enough at watching them to be a ref, so this was all he got. He just got to boss around middle school kids who he thought were too young to tell how much of a loser he was.

“Fine by me. I ain’t wanna play gay-ass basketball anyway.”

I heard my voice echo and made a beeline for the bleachers, which got blurry.

“What did you say?” Mr. Bisceglia thundered.

I kept walking. Mr. B blasted his whistle. Chiffawn laughed, “He said basketball gay, Mr. B.”

Tyrell got back in the mix and yelled, “Basketball ain’t gay!”

Crap. If I said basketball was gay, that meant the people who played it were gay, too. And what did Tyrell, and all of the other really big dudes, like to do? Play basketball. So, I’d just called Tyrell, Leo, and every other big dude at school gay.

A rustle and a holler went up through the class, with kids yelling and stomping on the bleachers. Mr. B dropped the ball and came trotting after me, so I headed for the cool, quiet locker room.

I heard the basketball being dribbled and shot off the backboard. Footsteps squeaked behind me.

Mr. B stopped and pointed at Tyrell, “You. Office. Now.”

I started for the locker room door again, then stopped when I felt Mr. B’s hand on my shoulder. Tyrell was ranting and raving like Taz on the cartoons as he walked across the gym and shoved open the door to the hall. Mr. B said, “Kevin. What the hell?”

His cracker accent made “hell” into two syllables, “hay-ull.” He circled around front of me and leaned in, speaking quietly in a buddy-buddy tone, like I’d let him down somehow. Chiffawn’s hair, forehead, then eyes peeked over the side of the bleachers.

I looked at the locker room door three feet beyond Mr. B. and wanted to push past him. He said, “You’re never like this. What’s goin’ on?”

His breath was hot and sour. The skin on his forehead was rougher than the smooth part where his hair used to be.

“Nothing. I just…left my shirt at home.”

He leaned back a little and swept out his right arm, pointing out the entire world that would be mad if I called basketball “gay” again. I wanted the world to be bigger than just the gym.

I couldn’t say sorry to this man, because I didn’t mean it. This man, with his diet soda and his eyes that look at the girls who are twenty years younger than him. This man, who runs the class that I hate the most.

“I see. But I’ve still gotta write you up, Kevin. You can’t act like that in class.”

He looked sorry to be writing me up. But if he was really sorry, he wouldn’t do it. I hated his bushy eyebrows that were almost as big as his stupid black mustache and how he was pretending to feel sorry. And getting written up? Man. That meant he’d call home and talk to Mama, and I’d get grounded for even longer and wouldn’t be able to go see The Mask on Saturday. I hung my head, away from Mr. B’s face and breath. He took his hands off my shoulders and clapped my back.

“Hit the locker room and get changed, Kevin. Stay on the bleachers for the rest of the class.”

The locker room was gray and quiet. I passed Demetric’s row. Had his stinky finger touched a locker handle? I wanted to smell and see if I could tell which one was his, and if it really smelled like fish.

Getting written up was for bad kids. I’m not a bad kid. I don’t go around getting in trouble, but it seemed like trouble had been getting into me.

Everything I did echoed alone. I took my time changing, sitting in my boxers on the wood bench, trying to figure out what to do about the phone call coming after school. Never mind Tyrell.