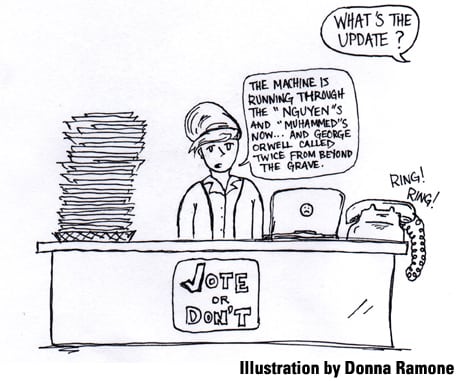 It’s election season again in America, and that means attacks on voting rights. In this excerpt from his new book, Billionaires & Ballot Bandits, investigative journalist Greg Palast reveals the latest tactics employed by democracy’s enemies. He describes the threat posed by Karl Rove (“Bush’s Brain”) and the Koch Brothers (Tea Party sugar daddies), who have created massive computer databases with profiles of voters. Palast also writes about barriers to voter registration and the impact of the U.S. Supreme Court’s Citizens United decision, which eliminated restrictions on corporate spending in elections by declaring that corporations are persons. Follow the links at the end of the excerpt for more about the book and for advice on how actual persons can protect their vote.
–Introduction by Chris Pepus

Only nineteen of one hundred Hispanics are registered in the USA. But not for lack of trying. Example: 42 percent of voters who registered in California, or thought they registered, had their forms rejected by the Republican Secretary of State and his Democratic successor Debra Bowen, who told us the Rejected Americans were mostly people with “unusual names”—Vietnamese, Hispanic, Filipino—that is, “unusual” for Republicans.

The chance you will be allowed to register to vote, to cast a vote, and to have that vote counted is directly proportional to the melanin in the skin of your ancestors. It took a Civil War to amend the US Constitution to ban restrictions on voting by race (the Fifteenth Amendment, ratified 1870). It took almost no time to overturn the results of the Civil War and virtually eliminate voters of color through a range of “voter integrity” measures designed by the Ku Klux Klan and the Democratic Party. Another Civil War, less bloody but not without martyrs, fought in the 1960s, again attempted to end America’s apartheid voting system.

Now, in the twenty-first century, the Grand Wizards are back again to stand in the polling station doorways, to overturn the civil rights movement, but this time with spreadsheets, not white sheets. Voters are lynched by laptop.

In 2012, Karl Rove is building the largest database ever conceived, called DataTrust, under contract with the Republican National Committee, containing every US voter and potential voter.

To win an election, you need votes. Or, just as good, you need to take away the votes of your opponent. While winning votes costs money, so does getting votes to disappear. Purging and blocking voters on a grand scale—thousands and millions of registrations and ballots—isn’t checkers. It’s complex and very, very, expensive.

Rove’s Crossroads is collecting a quarter-billion dollars for its computerized Jim Crow machine.

Look, if Karl wants to pimp out his computers with profiling programs that would make the KGB envious, for the purpose of targeting voters for a spiel to win their votes, well, bless’m, that’s democracy.

But given Rove’s history (we’ll get to those sordid stories shortly), you’d have to be a fool or a tool to believe that such data mining would not be applied to Rove’s cause of saving America from fraudulent voters by identifying and challenging “suspect” ones. And the voters Rove most suspects are not too white nor too rich.

It’s more than troubling that the first funder of the Rove-bot database and campaign operation was, within days of the Citizens United decision, billionaire Ken Langone. Langone knows all about databases. It was the database firm funded by Langone, ChoicePoint Inc., which crafted the faux “felon” list used by Katherine Harris to scrub innocent black voters in 2000.

Now Big Brother Rove has some fierce, if friendly, competition from Bigger Brothers, Charles and David Koch, who have crafted a data-mining operation called Themis.

To make use of Themis, the Kochs are putting together their own quarter-billion-dollar operation, Americans for Prosperity.

The Democrats? They’re still playing with their floppy disks.

The half-billion-dollar pokey put together by Rove and the Koch Oil Brothers is the down payment on a new uncivil, antirights movement. America’s voting apartheid is now digitized. In all, we can expect over five million voters to be convicted of the crime of fraudulent voting and sentenced to losing their right of enfranchisement in 2012 by the coordinated operations of private-funded and state-funded Jim Crow software. They’re not guilty; the software is.

In June 2012, the Democratic Party and desperate allies in organized labor got their clocks cleaned. Republican Wisconsin Governor Scott Walker, despite late polls showing a tight race, crushed his Democratic opponent in a special “recall” election. While Walker’s campaign officially outspent the Democrat eight dollars to one, this was only the tip of the cash-berg. Those semi-billion-dollar babies, DataTrust and Themis, went for a test drive.

Weirdly, Wisconsin voter registrations show a drop of 107,000 in the first six months of 2011, even before a mass attack on the list by the GOP-controlled legislature. Despite the fact that Wisconsin has no known history of fictional or dead people actually voting, the cost to real, live voters is devastating. The “matching” rules that knocked out 42 percent of registrants in California are far more severe in Wisconsin; and in Wisconsin, first-time registrants must mail in ID (as must first-time voters). The result is that only a third of Hispanic citizens in Wisconsin are registered to vote. And students? Forget it: using a formula from the Brennan Center for Justice at New YorkUniversity LawSchool, we can calculate that about 97,850 Wisconsin voters under the age of twenty-nine lost their rights due to the new ID law.

The difference between the last polls and the official count indicates several thousand ballots were ultimately challenged and rejected. Wisconsin state officials are withholding the exact numbers.

And Rove is crowing:

“In Florida and Iowa, Democratic registrations are down from their 2010 levels while Republican numbers are up. For example, nearly 29,000 Democrats have disappeared from the Iowa registration rolls since January 2011 . . . In Arizona, Democrats are down 58,000 . . . and there are now 176,000 fewer Democrats registered in Pennsylvania than in November 2010.”

Wisconsin in June is America in November. Wisconsin wasn’t a “dry run” for the November race. It was a very wet, drown-the-kittens-in-the-tub test run.

The Wall Street Journal attributes the drop of two million black and Hispanic registrants to African-Americans’ “disappointment” in Obama. They’re so disappointed that, if the Journal is right, several million called their secretary of state and demanded their names be removed from the voter rolls.

Am I suggesting that Rove would use his database to challenge voters of color in Wisconsin, or anywhere? I don’t read minds, nor can I predict into the future, but I do read “caging” files (see Chapter 15, “Karl Rove Confidential”), which I know Rove’s op did use in Wisconsin in 2004.

“7 Ways to Beat the Ballot Bandits”