(all pictures are of AFI)

First off, I have to thank Mitch at Nitro records for hooking this up for my wife and me. AFI sold out two shows in about a week’s time. Me not always keeping up with things found out about this show too late. Razorcake co-king Todd Taylor worked out the kinks and got my wife and I out for a outing that we dearly enjoyed. My wife was pretty excited to see AFI as was I. We both have never seen them but are pretty into most of their music. I called a day before to Nitro to confirm for sure that we (my wife and I) were definitely going. 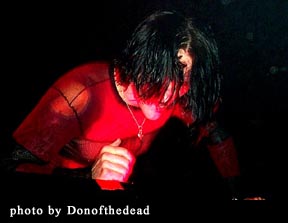 What is it with the Palace and starting shows at 6:00 p.m.? Is it geared towards the youth that don’t have to work? How about starting the shows at 7:00 p.m. so that the working folk don’t have to leave early and lose money. I don’t think it’s going to damper the sales of the dance club that follows after the gig. Especially since it’s a bitch getting to Hollywood on a Friday.

Well, I obviously missed Toys that Kill and most of Missing 23rd because I had to work and the traffic was its typical self in getting to the venue. I can’t tell you how Missing 23rd were because I was too busy pounding beers to calm me down from another shitty day at the job. I had to ask two young teenagers who were seated in front of me in the balcony area who the hell the band was that just played. You should check out Toys that Kill’s CD titled “The Citizen Abortion.” Todd gave me a copy and it is a damn fine release. 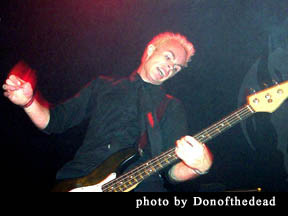 Three beers in me, Thrice comes on. I feel pretty good at this point. My wife and I hang in our favorite spot in the Palace, the balcony. I’m getting too old for the pushing and shoving. The place is absolutely packed at this point. Thrice feel the energy and see that the place is ready to be energized. They blaze forward and move the movers and shake the shakers. I know that I heard these guys before but whatever I heard before did not leave an impression like they did with their live set. They definitely brought a following also. I never knew that they were so popular. It’s not the first time I didn’t know something. The crowd compressed and expanded as they chanted along to lyrics that I had no comprehension of. Reminded me of Good Riddance. My wife and I were pretty impressed.

Now the tension and the crowd size was at max capacity. The anticipation for AFI was thick. I rush up to the barrier area between the stage and crowd to shoot some photos. The thick-headed bouncers announce to me and others there to shoot photos that we can only be in the area for only three songs and no flashes. I make a big stink because if I would have known I would have used different film. I plead my case for awhile and he says, “Do what you have to do,” and he turn a blind eye. I chat with some fans as they finish setting up the equipment. At that point I felt very fortunate to not have to be squeezed in with a bunch of people. The crowd starts chanting and starts to compress towards the barrier even though the band has not reached the stage. People are starting to scream in pain from the compressing surging forward. 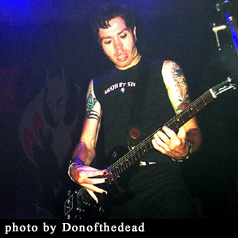 A plume of fogs billows from the stage and some gothic intro is played over the PA and the crowd goes crazy. As the first note hits, the band goes crazy and the crowd instantaneously follows suit. Davey Havoc (vocals) is looking more like Glenn Danzig as time moves on. The band is seasoned and sure knows how to put on a show. These aren’t a bunch of guys staring at their instruments. Everyone in the band knew that they have to put in their 100% to entertain. I was entertained, so was the crowd who hung on to every lyric and note. The crowd participation was at such a peak level that Davey probably didn’t have to sing a word because the crowd knew every single lyric.

Three songs in, I was escorted out of the pit and was back in the balcony with my wife. We watched as they played songs mostly from the last two full lengths and EP. I decide I’m going to shoot some more photos. I try to take out the film cartridge but I fuck up. I ruined that roll of film! Panicked, I load in a fresh roll and bolt back down to the floor. I run up to a side balcony and shoot some photos up there. With a few drinks in me I decide that since I can’t get into the barrier area I’m going to sneak onto the stage. Since I had some kind of pass, I walk quickly pass some bored security and up onto the stage. I shoot like a maniac while enjoying every last drop of what AFI is spewing forth.

I finish shooting and head back up to hang with my wife. Like little kids, we sing along and clap as each song goes into completion. I watch the crowd around me and see that they have connected with the band as they sang along. The band finishes and an encore is soon summoned by the crowd at hand. If they don’t come back on the crowd would easily have destroyed the place. As choreographed, the band comes back and closes to a near riot of energy. As soon as it started, it finishes.

The lights go up and I feel a little let down. We make our way out of the venue. It’s only 10:10 p.m. and I think they could have played for 20 more minutes! Oh well. I was energized and my wife also had a great time. I have to make it more of a habit to see AFI. They put on a great show. Now it was time to find a good burrito before I took on my next favorite activity. Sleep. 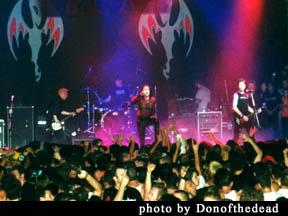