I was kind of shocked to be going to this show. I think I put in a request to cover it four months prior. I had heard nothing and completely forgot about the show. I received an email from AFI's publicity company saying, "I can get you in. Send me your address where I can send you the tickets." I'm thinking, "What tickets and what show?"

I had started a new job that week after being unemployed for a good eight months and my mind was scattered. The last thing I was thinking about was what shows I asked to be put on the guest list for. A little research on the screaming fast internet connection at the new job revealed that it was AFI. I thought the show was long past and I just was ignored and forgotten. Shit, AFI is a major label band now. They have videos on MTV and are on heavy rotation on the local radio station, KROQ. I'm pretty sure that the song, "Girls Not Grey," crossed over and is played on the contemporary pop radio station, Star 98. They are in a league to be covered by the likes of Rolling Stone and Spin. I am no one and Razorcake is a little magazine in comparison. 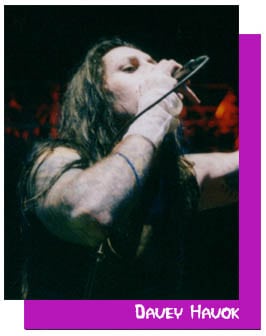 Shocked from the email, I sent my address to the publicity person and crossed my fingers. I was still pretty amazed by the possibility that I was going. The day of the show, I got the tickets at work and the reality was at hand. I would be going to a show that night. I called my wife but she didn't want to go. I secured my long time friend, who initially got me into punk, to go with me.

Los Angeles is currently experiencing a bus strike. I read a statistic that there are thirty percent more cars on the road. I feel it's more in the sixty percentile. I left work at a reasonable hour and it took me and hour and fifteen minutes to get home. That was a twelve-mile drive! It took me an additional hour to pick up my friend, who lives close by, and arrived at the venue about forty-five minutes late.

My friend forked over an exorbitant amount cash to have the privilege of preferred parking. It was a godsend. We parked real close to the venue and an exit. We went through the formalities of securing my photo pass and went through the post 9/11 security. We headed into the venue and saw where our seats were. The seats were, in my in my opinion, great: close to the soundboard, in the middle of the amphitheater. That meant that I was hearing what the sound guy was hearing and it sounded great from our seats. 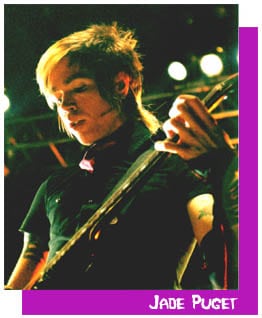 We sat and some band I didn't recognize was playing. I didn't know there was another band on the bill. I asked the kid next to me who the band was on stage. He told me it was the Blood Brothers. I had heard a lot of hype on this band so I was interested. We missed the opener. I knew we would miss Death by Stereo. I saw them open for Bad Religion at a record release show and I was not impressed. I recently gave away their CDs to a friend because the vocals bugged me. Well, anyway, the first thing I thought of the Blood Brothers was what a terrible At the Drive In rip off. Agitated, I began to hear that white noise drone I identify as that emo sound. Fuck! It's over for me. All could think was I was glad I missed part or half of their set. Towards the end, the audience had enough and a large majority of booing could be heard. During the last song of the set, I fought to keep my eyes open and almost fell asleep in my seat.

At intermission I checked the settings on my camera - since I am not a photographer - and proceeded down to the stage area to get a good vantage point to fire off a roll of film. I got down to the area where the barrier is that separates the crowd and the stage. Immediately, I was told that there is no flash photography and I can only shoot for three songs. Fuck! Fuck Me! I was panicking at this point because I don't know how to shoot in those settings. I saw another photographer next to me and asked him what settings I should shoot. He kindly told me what I should set my lens at and what shutter speed I should be at. I should have gotten his email address to thank him. 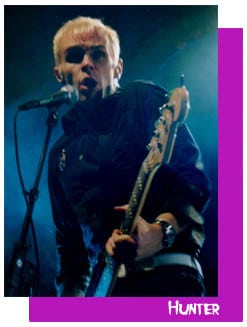 The lights dimmed and the intro track from Sing the Sorrow poured out the PA. I believe the entire crowd started chanting the lyrics. Davey Havok walked out and the crowd roared with excitement. I looked at the faces behind me and their eyes made me believe that they were seeing god. I saw tears of joy wetting the eyes of those who were now their number one fans. I couldn't shake off the chill that I received from the energy the crowd was giving off.

I focused my camera on Davey as the second song was about to be played. As soon as the first chord was struck, he flew over my head and dove into the crowd. A shot lost. He surfed his way back onto the stage and all hell broke loose. I fired shot after shot to at least capture some of the show. They are a hard band to take pictures of. Bassist, Hunter, and guitarist, Jade, jumped around, ran in every which way, and kicked and spun like I'm trying to take picture of the martial artists in the movie Crouching Tiger, Hidden Dragon. Davey is no slacker himself. The band has become seasoned showmen and they gave up the standing around a long time ago.

I admit, I can barely name a lot of the songs that they played that night. I was immersed in the music. I couldn't tell you what the song they opened up with after the intro. But as I go through their releases, I think they played "Girls Not Grey," "Dancing Through Sunday," "This Celluloid Dream," "Silver and Cold"? and "Home Is Nowhere" and "The Leaving Song" off of Sing the Sorrow. Actually, the highlight for me was when they performed "Silver and Cold." The crowd was singing along all night and at times they were louder than Davey. Davey took full advantage of the crowd's knowledge of the lyrics. He would not sing at a point during the song and the crowd did not miss a beat. Other songs that I think I remember were "No Poetic Device" off of Black Sails in the Sunset, "Totalimmortal" off the All Hallows Eve EP and "The Days of the Phoenix," "Ever and a Day" and "Morningstar." I'm only guessing on a lot of these. 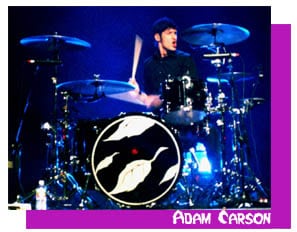 An hour set felt like fifteen minutes. I sang along to songs and fed off the energy of the band and especially the crowd. I watched as young men or kids would pump their fists into the air and scream along to their favorite songs. I watched young women singing and almost crying from the sheer enjoyment they were feeling from listening to songs that touched their hearts. It was eerie seeing this phenomenon. This was replicating the same reactions I saw on television when I saw the Beatles or Elvis performing live. Those performers took the crowd out of their everyday lives and raised them to a higher level of consciousness. Every word was hung on to and connected to everyone within.

I was glad to experience this night. I wanted to see how far they have come. When I saw AFI prior to getting signed to Dreamworks, I knew that they were about to move into the next level of popularity. What I saw in a 1,500 capacity venue, I saw in a sold-out amphitheater that, I believe, holds more than 5,000. I'm looking forward in hearing what they come out with next.