I couldn’t believe my eyes when I saw the lineup for this show. This would have been a show I saw twenty-four years ago back when I was in junior high in my formative punk years. I was not missing this. I contacted the Todd Taylor to see if he could do me a favor and get me on the list. With the magic of his contact list, he goes directly to the source and secures a spot. Fucking awesome!

The day of the show rolled around and I was excited as hell. I ran out and bought a new (used) flash for my new camera, bought extra film, and even put on a clean pair of shorts. I drove to the show with my friend who initially introduced me to punk twenty plus years ago. It was payback for introducing me to the music I have never given up on and to reintroduce him to what he has missed. I don’t believe he has gone to a punk show in twenty years.

We pulled up at the club and had to pay fifteen dollars to valet the car. That put me in a sour mood real quick. Fuck it, I’m here to have a good time. The guest list was as good as gold. No problems. We had to go through terrorist security with the metal detectors with no contraband left unscrutinized. My friend, trailing right behind me as he was being searched, yelled out to me, “Don, you dropped some cash.” I’m thinking, “I didn’t drop anything.” But my mind was quick and I looked down. Indeed, there was cash on the ground and I picked it up like it was mine. I stuck the cash in a pocket and went inside real quick to disappear. I reconnected with my friend and checked out what I found: thirty bucks! Now I was in a better mood! Parking was paid for and I still had enough cash for dinner!

Channel 3 had already started their set by the time we got in. I think we missed half a song. Since I’m writing this a week later, I can’t remember what songs were played or in what order, but I think the opener was “Indian Summer.” I do remember when they played all the oldies like “Manzanar,” “Wet Spots,” and “I’ve Got a Gun.” I was as excited as I was when I saw them for the first time twenty plus years back. I sang along and didn’t care that I looked stupid. It must have been a pretty strange sight for the kids to see an Asian guy in his late thirties with a noticeable gut spazzing out. Boy, they were good! The crowd was light at that point and so many people missed a great set. Mike Magrann and Kimm Gardener were the only original members and showed that age has not slowed them down. I’m glad they didn’t play any of their mid- to late-’80s songs when they were a hair metal band. A thirty minute set didn’t do them justice. 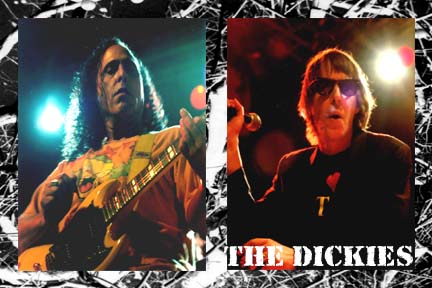 The Dickies are the Dickies. The props are the same but the inter-song dialogue changed since the last time I saw them. They even changed the song list. They actually played two songs off of their latest record this time. The crowd thickened and the place was full of energy. You can’t stay unhappy when you hear songs like “Manny, Moe, & Jack,” “Gigantor,” and their cover of “Paranoid.” Leonard and Stan Lee have been playing since the ’70s and their music is timeless.

My favorite all-time punk record would have to be the Adolescents’ blue record. There is not one song I hate on that record and I can listen to it repetitively probably for the rest of my life. To me, it’s that good. Any one who begs to differ, that’s your opinion, not mine.

Before their set, I bugged a friend I knew working at the club to get us on stage. The crowd was packed and I was tired of the “three songs and out” picture-taking rule. The security was also telling me “No flash,” so I had to get on stage. I paid big bucks for the flash and I was going to fucking use it. He came through and got us up there. Good thing, too, because by the time the curtains were opened, the place was packed. Me being the bad back sort of guy, I was very grateful to not have to be down there.

This was not the original Adolescents line-up. Tony was there, as usual, for vocals, Steve was on bass and Frank was there for guitar duties, but no Rikk for lead guitar and no Casey on drums. I guess they couldn’t make it. But the current line-up did not disappoint. I still get chills hearing the classics like “Wrecking Crew,” “LA Girl,” “Amoeba,” and “Kids of the Black Hole.” I sang along to “Losing Battle” and all the others. I enjoyed the new song “California Sun,” which should be a track on their upcoming record. They even had a new song about the last time they played the House of Blues last year about two idiots who got shot for harassing a black guy backstage. I didn’t catch the title but I saw the humor.

As I sat on the stage watching the band, the drummer sounded familiar. I have heard that precise style before. It didn’t take long for me to realize who it was. It was Derek O’Brien, formerly of Social Distortion. I must have seen him perform over twenty times when he was with them. I asked my friend who worked at the club who the other guitarist was, and he told me it was Johnny 2 Bags, the current guitarist for Social Distortion. What a way to keep it in the family! OC all the way! They could have billed the band as Social Adolescent Distortion and done two sets. That would have been cheesy and cool at the same time.

Great night. After the show, I scored some dinner with the money that I found and went home. I was feeling good until I passed my computer on the way to bed. Error message. My hard drive crashed. Fuck me!

JAKE AND THE STIFFS: If It Ain’t Stiff…It Ain’t Worth a Fuck: CDEP

YOUNG GO HARDS: What Are You, From Here?: CD