Okay, you know how I’ve been in a metal mood lately? Maybe you don’t. Regardless, last night’s show at Annie’s (http://www.anniessocialclub.com/) in San Francisco was just the show for me. When I was outside after just arriving, I heard about 1/4th of a song by what I assumed was the first band before I decided I needed to get my ass inside. Didn’t want to miss them if they were close to finishing. The singer was fucking screaming. Sounded to me like a cross between Henry Rollins and the guy from Pantera (in a good way, though). Then another singer came in and to me sounded like some thirteen-year-old pre-pubescent boy being all screechy and weird. Imagine my delight when I got inside and learned that the second singer was a woman. Fucking excellent. This was Acephalix (www.myspace.com/acephalix).
Although they’re from San Francisco, I’d never heard Acephalix before last night (I have been hearing their name around and about as of late, though). Because I’m a curious gal (My friends call me “Whiskers.” No they don’t.), I used the handy dandy world wide web to dig around and try to find out what Acephalix might actually mean. I couldn’t find that exact spelling (they’re taking liberties and/or I’m too lazy to look harder), but I did learn that “acephalic” (or “acephalous”) means both: 1. headless; lacking a distinct head, and, 2. without a leader or ruler. Interesting. I like how it has both the phallic aspect to it as well as the government aspect. Oh, how appropriate. Anyway, I loved this band. They were pretty intense, with the two singers (love two singers!) down on the floor the majority of the time screaming (occasionally verging into death metal vocals, but not too much for my taste). The male singer actually looks a bit like a young Henry Rollins, all ripped with a shaved head and tattoos. I could see veins protruding from the top of his skull sometimes when he sang; such was the force of his delivery. The female singer had long, dark dreads and was totally full on. Gorgeous. The music was fast-ish and I’d probably put ‘em a little closer to metal-y screamo thrash than hardcore (total metal rhythms), with maybe a pinch of anarcho-punk thrown in for good measure. Couldn’t understand the lyrics but it wouldn’t surprise me if they lean towards the politics. I was hooked and I felt for some reason that they’d be ultra popular in Eastern Europe. They’re playing with Born/Dead later this month and I am there. I felt like they should totally be on Metalocalypse.
By the way I went and saw The Sword a couple weeks ago. Fucking rad. Look, I live in California now. 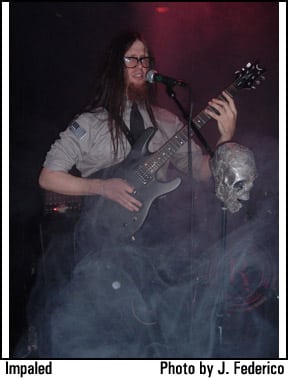 After Acephalix, Impaled (www.myspace.com/impaled) was up. Buncha longhairs. The guitarist on the left, as he was doing sound check, reminded me of a great guy I used to go out with quite awhile ago. He was an amazing guitarist and this guy from Impaled had the same long, graceful fingers that just seemed to run effortlessly up and down the fret board. Anyway. I figured there might be some headbanging in store. The guitar sound was good and crunchy. The left-side guitarist was wearing a button down shirt that was tucked into his pants and he had suspenders on. The other guitarist didn’t have the suspenders but he was rocking a tie. They both had black nerd glasses on. The bassist and drummer were similarly attired. Bullet and spike belts added what I thought was a touch of class to their ensembles.
When they did their mic checks, they just growled. No singing. I thought that was fucking hilariously awesome. They sounded like evil warthogs, or those totally scary monsters from Lord of the Rings. The mic stands had big skulls on them. A smoke machine was started up. A red strobe light (cop car-esque) was turned on and some creepy pre-recorded fascist-Nazis-taking-over-the-world music came on. A voice came through the speakers: “This is no longer war, this is cold-blooded murder.”
Oh yeah, Orks. It reminded me of running through the forest with Orks chasing you.
I think Impaled are technically probably really good, but they actually didn’t do that much for me. They were super metal (nothing punk about ‘em), reminded me of Kreator a little, and the bassist (kind of the main singer, I guess, although the guitarists also sang) had such a deep, death metal type voice that it just sounded like pure bass coming at you. Made me think of Animal Farm somehow.
By the way, one thing that I find to be super funny is that when you go on Impaled’s myspace page, you are immediately assaulted by this totally gross, gory picture (their album cover) of someone who appears to have been tortured in a particularly gruesome manner, entrails coming out of their disfigured lips, putrid foam and blood and all kinds of super nasty stuff, and then when you scroll down a bit further to the middle of the page it says, “Add Impaled to your top friends!” all happy and chipper-like. Hilarious.
At one point during the evening I could swear they were playing Anthrax in between sets. Walking through the crowd to the bar, it smelled like marijuana and cigarettes. At the bar, the guy next to me ordered a drink and I heard a wee Spanish accent. I loved that. It makes me so happy how music spans borders. Stupid borders. 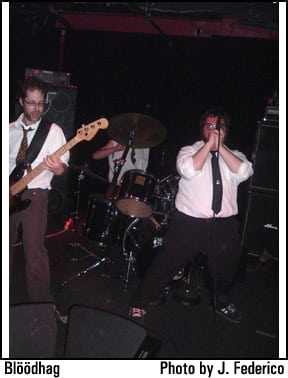 BlöödHag (http://www.bloodhag.com/) were up next. As they themselves say, “BlöödHag play short heavy metal songs about science fiction and fantasy authors.” Although actually they’re not really my style, being pretty straightforward metal with mostly death metal style vocals, this is excellent to me. There are clearly just not enough metal (or other) songs about authors out there. Some of the authors they touched upon at the Annie’s show included Daniel Pinkwater and Roald Dahl. They even went so far as to spell “Roald” for the audience, just in case anyone was confused into thinking that it was “Ronald.” The crowd seemed to be into them and a woman next to me, at least, was quite excited when they talked about certain authors. At one point she yelled out, “Yes! That is such a fucking good book!” I thought that was fantastic. Musically, as I mentioned, metal with low frequency vocals. I would hope that anyone into that style would be pleased about the bonus literary aspect to it. Myself, I got a button for my Mom (a librarian) that says, “If you can read this, thank BlöödHag.” Happy Mother’s Day, Mom!
400 Blows (www.myspace.com/400blows) was up next but I am sorry to report that I couldn’t stick around to see them. I’ve seen them a bunch before (although I haven’t yet with their new guitarist – well, I guess he’s not so new anymore), and I had to go meet someone. I am sure they were good, though, and could only have added to what was a stellar evening of metal. Fist-banging mania!

BE MY DOPPELGANGER: Convertible Girls: 7″