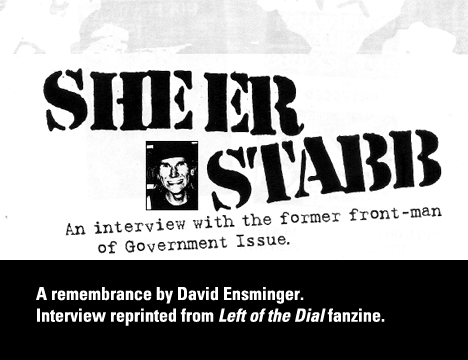 (click here to read the entire interview in PDF format)

At their hardcore peak, 1982-84, Government Issue were an incisive, breathless, zealous act whose songs eviscerated annoyingly happy people, uptight fashionitas, religious rip-offs, and useless new wavers. Stabb wove these subjects into lightning-fast songs, thereby defining hardcore as a humorous alternative to mere jock anthems for buzzed-hair crews. By the time the album Youdebuted in 1987, the band had morphed into a fine-tuned, rhythmically muscular, melodic rock’n’roll unit with an underpinning of psychedelia and a punk inner core. And his post-GI bands, like Factory Incident, explored nuanced, smart modern rock that highlighted slight British shoegaze tendencies as well as other artful leanings, not unlike Morrissey’s You Are the Quarry period.

In the late 1980s, Government Issue stayed at my parents’ house in the Illinois/Wisconsin state line a few nights after playing Madison, where the venue (lined with immaculate wooden floorboards) made the gig-goers and band peel off ragged boots and weathered tennis shoes, as if enacting a dizzying punk sock hop.

Years later, I interviewed Stabb for my zine Left of the Dial. The piece stretched over two issues (No. 4-5). Both Stabb and I bonded over shared interests: we both loved Strawberries, an overlooked morsel by the Damned, and Randy “Biscuit” Turner of the Big Boys. Plus, Stabb really was a gossip column and could dish some dirt, surprising me with his onslaughts (that will remain unpublished).

“See ya in the punk tabloids!” he signed off in an email to me in 2002. And that’s how I will recall him—tongue-in-cheek, a wise guy, but a singer of unusual prowess and emotional depth too. Goodbye, Stabb.(click here to read the entire interview in PDF format)

To help his wife during her time of need as she copes with medical bills, please visit https://www.gofundme.com/boycottcancer