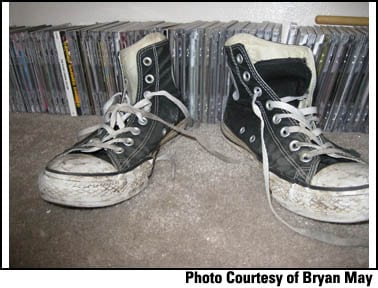 A Recollection of Events Occurring One Sunday Night: November, 2009 Column

Names have not been changed to incriminate the guilty.

I’m pretty lazy sometimes. If you don’t know, I live in San Antonio, a city that is about an hour away from “the live music capital of the world” a.k.a. Austin, Texas. The last time I had been up there was to see Leatherface, The Marked Men and Dillinger Four at Chaos In Tejas and that was a year and a half ago. I am pretty fucking lazy.

At one point or another I found out about a Toys That Kill show happening after the events of Fun Fun Fun Fest. I knew I wouldn’t be able to afford the gas to this miracle alone, so I had to do the age-old punk rock tradition of “hitchin’ a ride”. The friend I normally ask to lend a seat couldn’t make it because of work, but I was able to convince my friend Ben to get me up there.

Ben had been attending Fun x3 Fest the day before. He was supposed to go up before I went and I was going to ride with his girlfriend Jackie, but surprise surprise, he was in the car when she pulled up to my house. Turns out he slept through wake up call and our mutual friend Mitch got sick and didn’t want to make the effort to go back to Austin for the second day of the fest. The new plan was to drive over to Mitch’s house and grab the wristband he had and tape it onto Jackie, then we’d drive up and catch the last three bands of interest (D.R.I., Gorilla Biscuits, and Danzig) and then head on our merry way to the TTK show. Then it started raining. It wasn’t really bad, just a minor annoyance.

Now, when I say “we’d catch the last bands of interest” I actually mean “Ben and Jackie”. I had no way into the festival. So my options were to stay in the car or walk around the outside borders observing as much as my five and a half foot tall body could see over six feet tall fences.

Ben was observant enough to point out a vantage point outside the festival’s gates on a hill. From there I could see the events on one of the music stages. I stood there and watched D.R.I. a bit. They were a band I had a vague knowledge of from my brief time as a hardcore punk. (I only really listened to them because I was in a thrash punk band at the time.) After about three songs (read: two minutes) I remembered why I stopped liking them in the first place and began to wonder outside the gates.

The festival was set up in an outdoor park (which apparently had very few areas that were not covered wilderness, as I learned later from Ben, who was now slightly covered in mud. Thanks, rain!). I passed the comedy stage to hear some terrible comedian tell jokes about Back to the Future and various other things from the ‘80s. Moving forward, I heard some indie rock band that sounded vaguely familiar, but I couldn’t figure out why as I crossed the river running through the park. The river I remember being particularly significant because I realized I really had to pee. I’d say the perimeter of the area was about three-fourths of a mile, and nowhere in the vicinity was there a public bathroom. Apparently it’s standard practice in downtown Austin to surround your parks with parking garages (Well, they both use the root word park after all). Go figure. I was just about near my starting point again when I ran into Jay from The Anchor, who I had just played a show with the previous Thursday. He kindly informed that there were indeed no public bathrooms anywhere near.

So I’m standing behind a private business building on a sloped hill, hoping that none of the numerous cops I had seen with the last twenty minutes spot me and I’m completely sober, mind you. Just when I was about finished my phone starts playing a Dickies’ song, which means I was getting a text message. It freaked me out for a second, because I’m a nervous little fucker, but then I laughed it off, shook up, and continued my job of exploring.

I walked back to my vantage spot just in time to see Gorilla Biscuits play a few songs I kind of knew, but not well enough to sing along. They played an alright set, but I assume I would have been better had I been on the inside of the fence.

I soon found myself wondering around the gates again, trying to find some entertainment. Some guy shouted “Razorcake!” at me because I was wearing my fold-in “Fuck you” shirt (Hint: foreshadowing). Ben had mentioned that Mission Of Burma was playing somewhere, but I could only guess by that point I had missed them. I found myself at the comedy stage when I ran into Dugg (ex-Anchor, Capitalist Kids, Wild America, etc.) and we started talking for a second before the P.A. system interrupted the conversation saying Brian Posehn was about to hit the stage.

I’m a big fan of comedy, so this was a pretty big deal for me. I grew up around the stuff, my father being a former professional stand-up and all. I watched on my tippy-toes for most of the set, and it was so fucking worth it. I would have given almost anything at that moment to high five Mr. Posehn.

At some point during Posehn’s gig, Danzig started playing. Coincidently, on my way to see Posehn I passed right beside a tiny metal head exiting a huge tour bus. All I thought was “Man, I’m taller than that dude.” Yeah, that was Danzig. I caught one or two songs when I got back to the hill. It was pretty surreal. I’m not a huge fan of the Misfits, but I enjoy them and I have definitely never listened to anything Danzig had done since then, except for “Mother” which had found it’s way to my ears a few times. So I watched my first metal band ever, it wasn’t Motörhead and… I felt violated.

Somewhere during all this, Ben and Jackie exited Thrice Fun Fest and began walking up the hill towards me, which meant it was time to stumble our way to Red 7, which we kind of knew the location. But first, food! Ben had mentioned a place called Death Metal Pizza or something similar, which excited Jackie and me. We ended up on 6th St. looking for the theoretically brilliant idea. After a block or three, we gave up and settled for some bland Italian named pizza instead. We left and continued towards Red 7 and neigh a block further was Death Metal Pizza. Fuck! We could have Slayer instead of really weird pop music disjointedly playing against the video of the 2005 remake of King Kong.

Anyway, Red 7 was only a few minutes away from where we were and there was a decent sized line to get into the venue. I got out my money and was given the standard “Oh, you’re a minor?” spiel, afterwards I gained entrance. I continued holding onto my money. Nobody ever asked for the ten bucks. The show turned out to be free! Or I snuck in and no one noticed. I’m pretty sure it was free though. Which is the best kind of show. But just to be safe, don’t tell Blake Schwarzenbach. He seems like the kind of dude to fly from New York to Texas to get ten dollars.

(Now, I’m going to go ahead and skip a few hours, this isn’t a show review; it’s just my retelling of the night I had. If you want to know my thoughts on Smalltown/Ghost Knife/forgettors/Toys That Kill, e-mail me, but just so you know, they all had amazing sets.)

After TTK made my year, I was left standing next to stage smelling of beer and cigarettes without partaking in either. Ben was chatting up a few dudes and introduced me to a fellow named Joey, who apparently plays in Youth Brigade. And, he was the dude that yelled “Razorcake!” at me. He drunkenly ranted to me about how much he likes Razorcake and music and how it was all awesome. And he asked me my name like five times. It’s nice to feel like a celebrity, even if it’s only to drunken punks who don’t really know you.

Ben eventually tells us that we’ve been invited to a house party at his friend Joe (not Joey) and Candy’s house, so we head out to find the car to give a ride to seven people (five seater car) to the party. We forget our way back to the car and it takes us a good twenty minutes to remember where we are, but we do succeed in our task.

At the house, Joe also treated me like a pseudo-celebrity and I tried my best to be super-nice, but it was negated by the face that I was super-tired, but Joe also told me he felt like he was saying all the wrong things, so I think we both equally hated ourselves for the bad conversationalists we made.

Eventually, we made our way back to the car and I don’t really remember how, but I was back in my bed when I woke up at noon. Stupid phone. Why the hell do people have to know where I am before four in the afternoon?

I get up and get dressed, returning to normal life and pretending that awesome things didn’t happen last night, because no one in the “real world” cares.