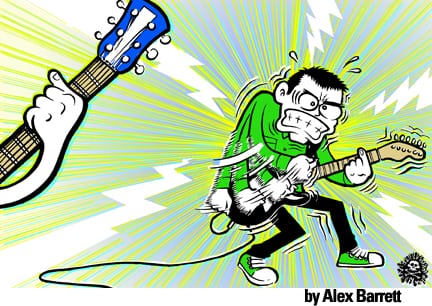 There are few bands that I defend and promote as heavily as The Marked Men. If there were ever unsung heroes of the punk genre, I can’t think of a better candidate. If you’re reading this column you’re likely familiar with them. If not, here’s the skinny: in 2001 the Reds broke up because their bassist, Chris Pulliam, moved to Japan. The remaining members of The Reds—Jeff Burke, Mark Ryan, and Mike Throneberry­—teamed up with Joe Ayoub to form The Marked Men. Jeff and Mark shared lead vocals with a little help from Joe here and there, and Mike did his fair share of backups as well. The band went on to release four albums, four singles, and two split 7”s. And why, pray tell, was this arbitrary Denton, Texas, punk rock band any different than the million others? That’s what I aim to ask, answer, and excessively ramble about.
The defining characteristic of The Marked Men’s career is a vision of pulse-pounding melodic solidarity that shined through on all of their releases. Between the first and fourth records the separation in sound seems non-existent. Usually a band that doesn’t evolve is written off as a group of rehashers, continuously going back to the well to dig up the same old tropes time and time again, but The Marked Men don’t feel that way. Their music shows an enthusiasm for music that is catchy, fast, and simple, yet dense in approach. Characteristics of their sound are found in their steady approach to rhythm, driving drumbeats, and simplistic song structures.

To illustrate the finer workings of a band that has subtleties out the wazoo, I’ve compiled a list of tracks from throughout their discography. Most of them would be considered their best tracks, some are there to show their diversity, but they’re all on the list because I like them a lot. And it’s my list, so shut up if your favorite song isn’t here. This is half criticism, half memories. Let the great experiment begin!

“We Don’t Talk about It” (Self-titled, 2003, Lead Vocals: Jeff)
The first track from their first LP, “We Don’t Talk about It,” begins with the whole band playing a riff of simple power chords backed with Mike Throneberry’s signature drive on the drums. No drum clicks, no count off, just a full-on assault. “We Don’t Talk about It” shows the band’s trademark techniques in a song that has nothing much beyond that. It shows the exact template that they use for the rest of their discography to pump out the hits, but this is the pure one. This is the unaltered formula to their success, on side A, track one.

“Gone Away” (On the Outside, 2004, Lead Vocals: Jeff)
Mike really is my favorite punk rock drummer. His dedication to the straight rhythms throughout The Marked Men’s history is truly awe-inspiring. “Gone Away” illustrates the pure speed mixed with the sugar encrusted songwriting of The Marked Men. Switching between the hard-hitting verses with the more subdued backing tracks of the chorus, “Gone Away” is possibly the band’s greatest song and that’s a hell of a feat. The vocals on this track show a primitive growl that’s absent on most of the songs when Jeff takes the microphone. Not that the pop elements have been eliminated, but the drive of the song is harsher than usual. The dueling vocals between the two singers during the chorus—with Mark taking the title drop and allowing Jeff to bounce off of him—provides the landing before the driving punch into the verses and solos that follow. This song alone makes On the Outside an essential desert island disc.

“Doctor Dan” (On the Outside, 2004, Lead Vocals: Mark)
“Doctor Dan” was the single for On the Outside, complete with low-budget music video. My favorite part of the song is Joe’s bass intro working as the lead-in to everyone else. For a while, my own band had a song we called “The Doctor Dan Song,” which had a very similar to feel to this song. Really, my band was trying to be The Marked Men. Their discography shaped the way I wrote songs and the way I played guitar and drums. This song was also a benchmark for me, trying to even come close to something that seemed so simple. There’s a magic in The Marked Men that I was never able to figure out. They could write these simple songs with repeating parts. They never seemed to get old or boring, but when I tried the same concepts they seemed stale. In hindsight, it was the very fact that those songs were impersonations that made them seem so flat. I wish I had figured that out when my band was still together.

“A Little Time” (Fix My Brain, 2006, Lead Vocals: Jeff)
I can remember the first time I ever heard this song. I was in gym class, working on math homework that was due the next period. The coaches were nice enough to let us wear headphones and play Gameboys. Though the homework got done, the album kept distracting me. There were little things in every song that made me lose my focus for a second, which doesn’t happen often when I’m hearing a record for the first time. It’s saying something that I remember this event so strongly six years on. It was another three years before I would claim The Marked Men were my favorite band, but this song, the first burst of sonic assault to ever grace my ears, will never leave my memory. It’s a perfect song: the way everyone comes in a split second before the vocals hit, the way everything drops away for the guitar lead and the bass drum, the way it breaks after the chorus where the guitars start dueling each other with clean chords being picked at note by note. I don’t have a favorite song of all time, but if I did, this might be it.

“Fix My Brain” (Fix My Brain, 2006, Lead Vocals: Jeff)
When I was sixteen, I had just discovered a whole new scene of underground punk bands that I had never heard of before. It was the first year I had ever heard of The Fest. I went through a list of every band that played that year and checked them out. Doing this massive dive I discovered a lot of bands: Off With Their Heads, This Is My Fist, and most importantly, The Marked Men. In an attempt to get myself familiar with the thirty-plus bands that I just found out about, I made a harstily created mix CD. Track seven was “Fix My Brain.” Tracks one through six didn’t get played very often.

“Fortune” (Ghosts, 2008, Lead Vocals: Jeff)
Sometimes, this song makes me want to give up music because I know I’ll never write anything this good.

“My Love” (Ghosts, 2008, Lead Vocals: Mark)
There was an interview with an older R&B singer who was asked why he didn’t print his lyrics, and he said that he felt that the audience responded better if they got to latch their own meaning onto the songs with the lyrics that they chose. That’s the philosophy I take when I’m listening to The Marked Men. Songs like “My Love” remind me that I don’t know the words to most Marked Men songs, but I know the notes. I can’t sing along, but I can sure embarrass myself when I forget that fact. It’s impressive that the music is so good I forget that I don’t know the words. The best part about this song is how the guitars aren’t playing chords for the first half of the song until the chorus kicks in. It seems so loose and soft until the chorus.

“Red Light Rumors” (Ghosts, 2008, Lead Vocals:Joe)
By my count, I only know of two Marked Men songs when Joe sang lead vocals (with the other being “Too Pretty to Fuck” on the This Is My Fist split). Tucked on the tail end of the band’s final LP, “Red Light Rumors” serves as an amazing contrast to the rest of the album. Joe’s vocals are rough, much more akin to bands like Hickey than the pop melodies of Jeff and Mark. Musically, my favorite part comes from the lead guitar that pops up after every line of lyrics in the verse. The motion between the first chorus back to the verse has Joe belting out the phrase “against the world.” That transition is perfect.

“On” (The Other Side b/w On, 2010, Lead Vocals: Jeff)
“On” is really just the latest in the long line of Marked Men B-sides I’ve learned to love in place of waiting for a new album. First it was “Like Robots,” then it was “She Won’t Know,” and now I’m here. This song is the best final Marked Men song I could have hoped for. Its slow, contemplative nature lets me pretend that the song won’t end for just a moment. It’s a bittersweet realization when you’re looking at the discography of your favorite band and you see one more song that you’re not intimately familiar with. I’m hesitant to learn every song that’s left, because once they’re gone, that’s it. I still have the This Is My Fist and Birthday Suits splits to learn to love, but one day there won’t be any Marked Men song that I don’t know by heart. And I’m just not tough enough for that. “What would you say if I stayed?”: for a final song that’s the best question I could hope to ask for, because I’m not sure myself.
I would do a lot in this world for another batch of Marked Men songs, but I’m content with what the world got out of it. If television and Against Me! records have taught me anything, it’s best to let it end when everything is still perfect. It’s not like I’ve lost these guys, anyway. Mark’s in Mind Spiders who just put a great record, Joe’s in Low Culture who are gearing up for an LP, and Jeff’s got Novice who I think have something coming out on Dirtnap soon. There are just some things that create holes in your heart. No matter where you look, you never find anything that quite hits home in the same way. Say not in sadness that they are not, but say with joy that they were.

Talk to me about when you got to see The Marked Men live or send your poorly written fan fiction to: [email protected]