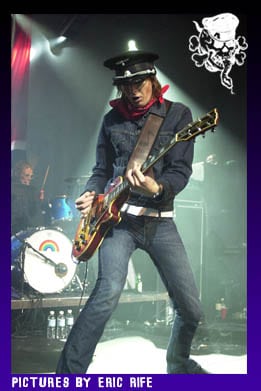 A Fireside Chat with Gay Norwegian Sailors: An Interview with Turbonegro by Rex Reason

The scene in Los Angeles while Turbonegro shot a video for "Sell Your Body (To The Night)" from their first studio album in five years was like the greatest, sickest circus to never happen. A grizzly bear, pseudo-celebrities famous for backyard stunts, Mexican wolfboys, Academy Award-nominated directors, transvestites, and denim-clad Norwegian men in inch-thick makeup who sing about the North American Man-Boy Love Association were all in attendance.

You have to expect a particularly potent brand of darkness from a country as far north as Norway. Formed in Norway at the tail end of the 80s, Turbonegro didn't hit their stride until the mid-90s with the homoeroticly-charged shock punk of Ass Cobra. The band had morphed from a standard punk outfit to a denim-clad, mustachioed hardcore homosexual dream come true. Living in the heart of the church-burning, rival band-killing Norwegian black metal scene pushed the band to come up with the one thing that could scare the black metallers: flagrant, flaunted homosexuality. Songs like "Sailor Man' and "Midnight NAMBLA" backed their visual cues with a sonic punch.

Shortly after the release of Ass Cobra, personnel changes within the band brought in guitar virtuoso Euroboy and drummer Chris Summers. These additions, a shift in songwriting and refinement of the band's image all came together to produce Turbonegro's widely hailed Apocalypse Dudes in 1998. Less GG Allin and more Alice Cooper than the band's previous work, this album was the culmination of the band's decade long punk aesthetic and homoerotic image with the hard rock of Cheap Trick, KISS, and T Rex. Jello Biafra declared that Apocalypse Dudes was "possibly the most important European record ever."

Just as the band was ready to capitalize on the album, disaster struck. Singer Hank von Helvete had a heroin-related nervous breakdown and the band broke up before the US release of Apocalypse Dudes. Somehow, the band became bigger than ever. A tribute album featuring an eclectic mix of punk, metal, alt-rock, and Euro-pop groups followed a few years later. Then it was announced that Turbonegro would reform for a few European festival dates in the summer of 2002, nearly four years following their meltdown. The news got even better for loyal Turbojugend ("Turbo Youth") as the band announced a new album to be released on Burning Heart/Epitaph in the Spring of 2003. The band then embarked on their first US tour in 5 years with a mix of sold out headlining dates and opening slots for Queens of the Stone Age.

Happy Tom: When you wake up remembering how fucked up you were, "Fuck, man, I was bad Mongo last night."
Hank von Helvete: That's actually how we started doing it because we were like, "I was so drunk last night I was total mongoloid."
Rex Reason: Are you familiar with Happy Tom's Hamburgers here in Los Angeles?
Unidentified: That's where I was going to take you. It's right where we're shooting tomorrow. We should pick up a shot where you walk in.
Tom: It could look like one of those cheap commercials on American television. "Hi, this is Bob!"
Unidentified: "I'm Happy Tom for Happy Tom's Burgers!"
Tom: Happy Tom's burger empire. I started with 2 empty hands and 2 buns.
Hank: I saw that in Illinois it was like Ray's Gun Store. "You buy a Winchester, you get a small Derringer in the deal! I don't wanna make any money, I just LOOOOVE selling guns!" And he looked like Buffalo Bill.
Rex: Is the acceptance of leather a new philosophy for Turbonegro?
Tom: No, we just did it because German journalists we knew they'd be focusing on denim, because they're so meticulous. "You wear denim, and now leather. Why is this?!".
Hank: And this (points to exposed chest) is Scandinavian leather.
Rex: Human flesh?
Hank: Only cloth with nipples.
Rex: Are American journalists as anal as the German journalists?
Tom: No, much cooler.
Rex: Is denim still king?
Hank: Yeah. It's what we wear. That's our second skin.
Tom: And it's blue. 'Cause that's the color of… if you take ultraviolet photos of frogs and other animals fornicating, they radiate a blue aura. So that's what we're like.
Hank: On the astral level.
Tom: It's like Hank says, he's omnipotent. He's got an erection everywhere.
Rex: How much of the homosexual image is fact and how much is fiction?
Both: Yes.
Hank: That's our answer to that.
Rex: Has there ever been backlash against Turbonegro from the homosexual community?
Hank: No, they're kind of contemporaries.
Tom: What are they going to do, hit us with their purses?
Hank: They're actually embracing us.
Tom: Yeah, we've got a lot of homo fans.
Hank: It's actually cool. They think it's cool that heterosexuals are making this homo statement.
Rex: So you do admit that there are heterosexuals in Turbonegro?
Hank: There are some closet heterosexuals.
Tom: Periodically.
Rex: Does Turbonegro get more male or female groupies?
Hank: Actually more females, but quite hot females, too. We used to have what we called groupers. No girls. Just boys coming in to talk about groups. Bands.
Rex: Have you ever seen the mouth on a grouper fish?
Tom: Yeah, they have big lips.
(A man walks by with his thong underwear pulled high over the top of his sweatpants)
Rex: Is Turbonegro the greatest Norwegian band ever?
Hank: Wrong. We're worldwide. We don't consider ourselves a Norwegian band. We consider ourselves a European band.
Tom: North Atlantic.
Hank: A NATO band.
Rex: Are you greatest NATO band ever?
Hank: Greater.
Rex: What about the UK?
Hank: We're a Western band.
Tom: The UK Subs? Yeah, we're better than them.
Rex: Do you feel that Scandinavian Leather is as corrupt as predicted?
Hank: Ice cold and corrupt?
Tom: Yeah, it's pretty corrupt. It's kind of like Los Angeles in the late 80s. That was a very corrupt period for hard music. Big hair, Sunset Strip. But it's also Detroit 1973 and Stalingrad 1943 all blended in one record. And actually, seriously, it could have been much more mainstream. It's rawer than Apocalypse Dudes. A lot of naysayers, people that play in other bands in Scandinavia, they don't like us because we're so great. They say they like us, but they don't. They talk shit. "Yeah, Turbo got together again for the money. They're just going to make a mediocre record and take the money and run," and we made our best record ever. I really wouldn't say that if I didn't think so. 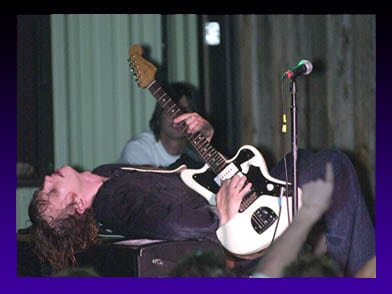 (Later with Euroboy)
Rex: How was it filming with a live grizzly bear?
Euroboy: It was on the verge of going out of control at any moment, that's what I thought.
Rex: Were the flutes and strings on Scandinavian Leather your additions?
Euroboy: It's not like I tried to make my mark on the album. It's more that I tried to make the best out of every song, make it as good as possible. The outro for "Ride With Us" became almost this evil, psychedelic chord progression and it reminded me a bit of "Interstellar Overdrive" by Pink Floyd. The original idea was that it should just end with just a wild ass guitar solo, but when I listened to the album I thought there was just so much soloing on the album it got kind of tiring, kind of tiring on your ears. So I thought it would be cooler to have a release at the end, as you go into Deathpunk Heaven. And the song's called "Ride With Us", so maybe I'm over-explaining things, but it's sort of "come with us".
Rex: So when we die and go to Deathpunk Heaven, there will be flutes there?
Euroboy: To Valhalla.