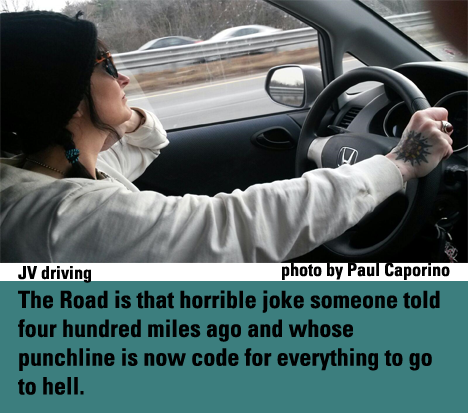 A Broad Abroad: Where The Road Leads

After a ten-year hiatus and self-imposed exile to the country, I returned to music as the bass player for a well-established band that lived to tour. The oldest among them was ten years my junior and the band had a well-deserved reputation for their good-natured depravity. They’d had a decade of history and a roster of dozens by the time I joined up with them. I was fortyish, female, and no longer in touch with anything punk rock. To this day I have no idea why they took me on with the intention of touring. It sounded like something I would think of as “urban camping.” I hate camping so much that I’ve never even tried it.

They were and are a great bunch of guys and I’ll always be grateful for their patience with me as I shook off the rust and slowly recovered the part of me that I thought I’d left behind in some crappy dive bar in the mid-‘90s. And those guys did something else: they caused me to embark on one of the great love/hate relationships of my life. They introduced me to The Road. 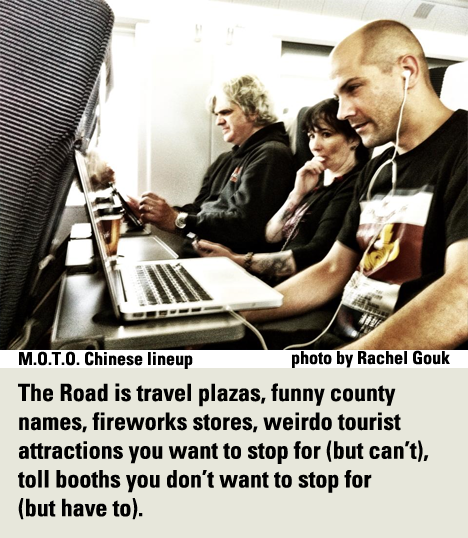 The Road is travel plazas, funny county names, fireworks stores, weirdo tourist attractions you want to stop for (but can’t), toll booths you don’t want to stop for (but have to). The Road is endless stretches of farmland, herds of cattle, Mennonites at a Sbarro somewhere in Ohio, strange olfactory cocktails of diesel and methane and whatever the local crops are. It’s refineries spewing flames into the night sky, massive buildings filled with RVs or powerboats, ghostly abandoned warehouses tattooed with spray paint and bullet holes.

The Road is also what happens on the road. Crapped-out alternators, hours-long detours, unexpected emergency stops in towns you never knew existed. That CD that got stuck in the player. That horrible joke someone told four hundred miles ago and whose punchline is now code for everything to go to hell.

Sometimes The Road isn’t even an actual road. Sometimes it’s a flight path or train tracks. It’s luggage hassles and distorted boarding announcements and scrambling for comfort among your fellow pilgrims as you rush to sit still, trapped in some metal tube or other, awash in boredom and velocity.

The Road is the assumed birthright of the modern American, drilled into our adolescent skulls by buddy movies and pop music and car commercials. The Road, unfortunately, belongs to everybody. That can render its mysteries and delights pretty bland, pretty fast. After all, if you’re out there with businessmen and church groups and spring break kids how special can it be?

Two years, two tours, and one side project into my time with the band that resurrected me, I found myself in an even more unlikely and amazing place: I was now married to one of my music heroes, an infamous rock and roll vagabond who had spent the better part of his past few years circling the globe and playing music. And almost two months to the day after we exchanged vows, I was standing on a stage “filling in” for his usual New England bass player, who had a schedule conflict for a Boston gig. What was supposed to be a convenient favor turned into a permanent position. A tour to Chicago and back stood in for a delayed honeymoon. The Road brought me to a new place and when I returned, my old band had dissolved at the wish of its leader. But as that path dwindled into a memory, suddenly The Road opened up even more.

Everyone has a different relationship with The Road: some find it alienating and they can only enjoy it in the company of friends. Others travel as if they are praying: it is sacred, private, secretly exalting. There is likely to be a mix of these people in any tour-bound vehicle. The more people there are, the more opportunities there will be for resentments, annoyances, alliances, and grudges. The upside is that there are also more chances for the tension to be broken by somebody farting. When it’s only two people, there is both more and less pressure. And the fart thing just doesn’t work the same way.

A dog who has been away from home and who returns will find himself ruthlessly examined by his pack-mates. Some of them, smelling the world on him, become confused. Maybe they think he’s another dog than the one who left. There can be some snarling, some posturing. So it is with a musician coming back from The Road. Tell your friends that you just travelled to Asia or Europe or the North American coast farthest away from your neighborhood to play rock and roll and most of them will tell you they’re jealous. Some of them really might be. It may play out as a coldness, an impatience that wasn’t there before. They’re not impressed that you slept on floors or had to run for trains while carrying a hundred pounds of merch and guitars. They don’t care that you didn’t have enough money to bring back souvenirs (or eat outside of the venue); that you didn’t have time to see tourist attractions (or shower). They want The Road, or at least they think they do, and they don’t like that you had it.

If you try to explain that it was fun and exciting but that you also didn’t get to really do much more than play your shows and travel between them, they’ll see it as false modesty or try-hard world-weariness. If you tell them it was great, then you’ll be gloating. Pretty soon, you’ll start keeping your stories of The Road to yourself. You won’t want to share them, because now you don’t want to share The Road itself with anyone, at least not with anyone who isn’t part of it already. But remember, it belongs to everybody. Even those jerks.

There’s always been a Road. Just ask Moses or Marco Polo or Blackbeard (The Road can be the sea, too). Hell, ask medieval minstrels, Buddhist monks, Dust Bowl hobos and Vaudeville troupes. There’s an undeniable seduction to it: if I’m on tour, for those days and weeks I am only immediately responsible to show up. Even I can get that right. And when I do show up? Everybody’s happy to see me. Even though I’m just a supporting player, I’m greeted with enthusiasm and kindness.

The momentum keeps my mundane home life from catching up with me. I’m often moving too fast to even miss it properly. The invisible ties to tangible things like a house start to fade. How often do I see my friends anyway? Do I really need all of the things I have at home, all of the creature comforts and familiar totems? 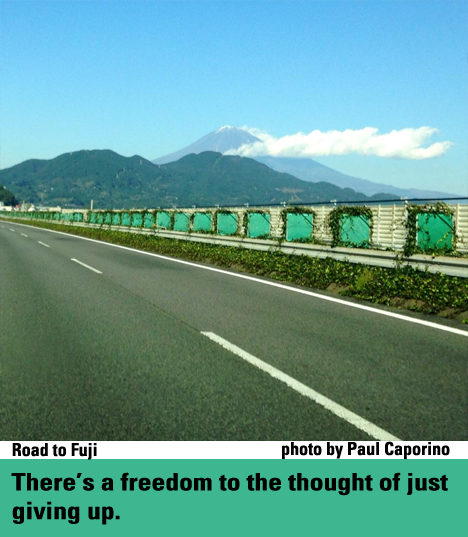 There’s the temptation to think of this as a permanent way of life. There’s a freedom to the thought of just giving up: to live forever nowhere and everywhere, to change my habitat every week, every month. The fact that I am now closer to fifty than forty only adds a poignant urgency to it.

But when we walk through the door of the old farmhouse and our dog turns inside out with joy to see us, as I set my suitcase down in the place where I can totally unpack it, as I drink water from our tap and look mindlessly into our vacant fridge, I am filled with relief that is a twin to the excitement of the highway opening up, the airplane taking off. I’m here, and I’m content until the next tour.

Is it Tuesday? Or Wednesday?

Why isn’t there any coffee in this goddamned house?

Are you seriously telling me that no one watered the plants in three weeks?

Ugh, look at this pile of bills that came in.

I have no idea if I have to work tomorrow or not. Is it Wednesday? Or Thursday?

Man, is it good to be back.

J.V. McDonough is old enough to be your favorite aunt. She played bass in some Boston bands you never heard of, then joined The RiverCity Rebels (now defunct) in 2010. She now plays fulltime for M.O.T.O. with her husband Paul Caporino. Between November 2012 and the present they have played dates in China, Hong Kong, Japan (twice), Finland, Estonia, Berlin and dozens of U.S. cities. Click this link to learn more about M.O.T.O. and talk to J.V. via Facebook.